It’s Owl Time is a local business solely dedicated to selling FAU merchandise. In May, it’s set to close its doors after selling for seven years. 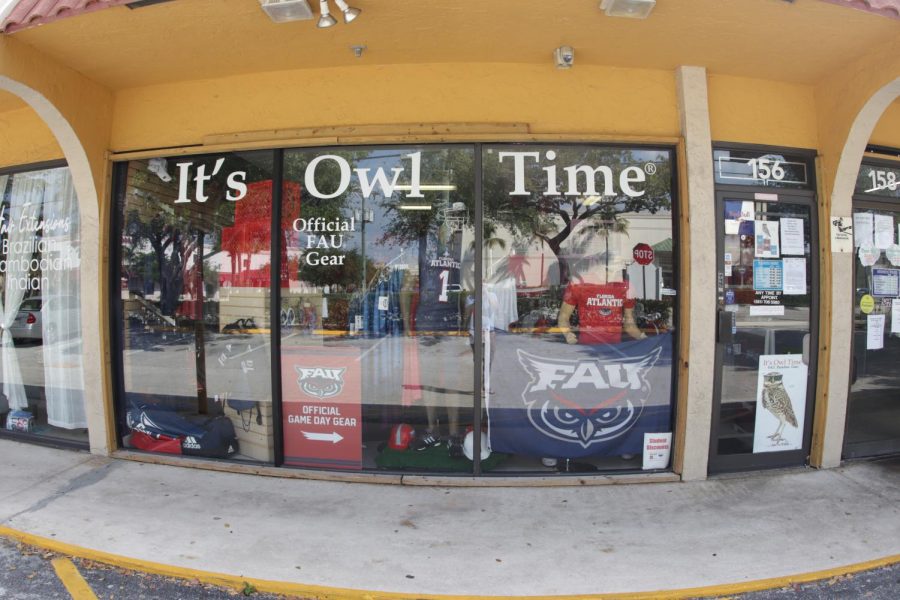 Mark Noll has owned It’s Owl Time, an off-campus FAU merchandise store for seven years. When coronavirus hit South Florida, he knew there would be trouble.

“Weeks ago when it started to spread, I knew the virus wouldn’t put us out of business — the panic will put us out,” Noll said.

On March 23, Noll announced he was shutting down It’s Owl Time in May. This comes after his main market, the FAU community, largely left campus for the rest of the semester in response to the university’s actions to prevent the spread of the coronavirus. This closure of campus also meant that FAU Athletics was canceled for the spring, which also affected the store’s sales.

“When 90 percent of the traffic that comes to the store has to leave the area, there’s no way that business can be sustained,” Noll said.

Boca Raton closed all non-essential stores during this time, which It’s Owl Time qualifies as, but the store still plans on filling out online orders. Noll said that since he’s announced the closing, he’s been “overflowing” with orders.

As an FAU graduate in the class of 1994, serving the FAU community was one of the driving reasons behind It’s Owl Time’s inception, Noll said.

“Being an FAU fan, I knew that’s what I wanted to do,” Noll said.

Starting the store through online orders in 2013, Noll was driving along 20th Street near the university when he saw the vacant shop room that would later house all sorts of FAU products. Former athletes would sell their old memorabilia back to the store with their autograph on it  and coaches such as former football coach Lane Kiffin would sign hats and shirts and the store would sell them. However, one of the store’s most distinguishing features is the Wall of Fame, a blue wall on the right side of the store where, according to Noll, “thousands” of famous alumni and student-athletes can sign their name.

“Having conversations with people about the Wall of Fame, giving the tours around the store and talking about the history of FAU are the things I’m going to remember the most,” Noll said.

Terribly sad news. I am incredibly grateful for all that Mark and It’s Owl Time have done for FAU! The best of luck to Mark in his future endeavors.

One of his favorite memories of the store was when FAU alum and NFL player Alfred Morris signed the wall. What made that special, Noll said, was that Morris came up to him during the first FAU Hall of Fame induction dinner last year and asked if he could stop by the store the next day. Noll then said that Morris showed up at the store like he promised and signed on his induction day, despite induction being a hectic day.

“Mark was like family. Every time I would go into the store I would always talk about how the season is going to go and what new stuff he was getting in,” Agin said.  “Every football season I look forward to football and going to see Mark at It’s Owl Time.

After the announcement of It’s Owl Time’s closure was made, an outpouring of support came from students, alumni, and even FAU Athletic Director Brian White. There were kind words posted on social media, an influx of merchandise orders, and a GoFundMe set up by customer and alumni Billy Perez on behalf of the store.

Thank you for your support Mark!

“Mark has been a dedicated Owl fan since the beginning. This is more than a storefront. This is heritage. This is dedication. This is love for FAU. And anyone who has had the PRIVILEGE to step foot inside and meet Mark, will understand this.,” the page’s description says. “These donations are to serve as a “Thank You” to Mark and the It’s Our Time Family for all that he has been a part of these past 7 years.”

Noll said he appreciates all of the kind words and orders, but he says the best way to help is to buy products.

“Our GoFundMe is buying merchandise from the store, and buying products,” Noll said. “We’re not going to save It’s Owl Time, but the support and kind words mean a lot.”

The kind words and Twitter posts are part of what made It’s Owl Time a staple in the FAU community, Agin said.

“There is no better feeling than going to a place who has as much love of FAU as you do,” Agin said. “That is what made Mark unique, and I will always consider him a friend, brother and a fellow alumni just like me.”

There are no current plans to re-open the store, although Noll said that he’s not against re-opening. As for the Wall of Fame, Noll said that he is looking into companies that will photograph and scan it. He is hopeful that he can get it reproduced and given to FAU, and would love it if the wall would be over on FAU campus and “carry on the tradition,” as Noll said.  But even if the store does close its doors for good, Noll assures people that this isn’t a time to be sad.

“Seven years ago when I started It’s Owl Time, I never thought that it would reach the level of popularity that it’s at now,” Noll said. “Normally small businesses only last around a year, so I’m grateful that I got to live my dream for seven years.”

Joseph Acosta is a staff writer for the University Press. For information regarding this or other stories, email [email protected] or tweet him @acosta32_jp.