In less than 24 hours, the petition has gained over 3,000 signatures and students from other Florida schools are doing the same. 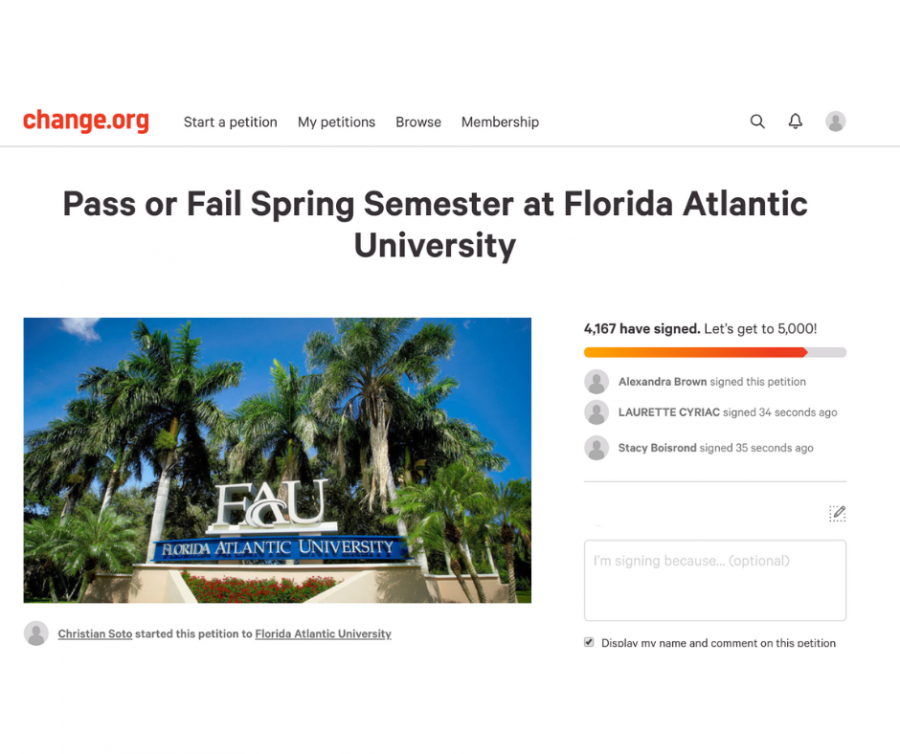 Screenshot of a petition calling for FAU to make all classes pass/fail for the rest of the semester.

After classes were moved online for the remainder of the semester, an FAU student started a petition recommending a pass/ fail option or a curve. In less than 24 hours, it gained over 3,000 signatures.

The petition, started by junior Christian Soto outlined that, because of the campus closure, “it is likely that [student] academic performance will be deeply affected… We believe that the next step is to allow class the option for pass/fail or a generous curve.”

It also referenced that institutions like Massachusetts Institute of Technology and Smith College have mandated alternative grading for the rest of the school year due to coronavirus.

“We ask that Florida Atlantic University gives us the option to transition from letter grade to pass/fail,” the petition states, “even a generous curve from professors would alleviate stress from FAU students. We hope that Florida Atlantic University enacts this change for the betterment of the student community in these trying and stressful times.”

“I saw other Florida universities doing the same thing: to petition due to the unfairness of the whole situation,” he told the University Press. He also started the petition because of the “added stress for students who learn better in a classroom atmosphere and the fact [that] a good number of people are without work in the hospitality scene, which further adds to stress of paying bills.”

All the petitions stress a central point –– the pandemic’s effects on academic performance.

Each petition has signatures in the thousands and combined, there are over 33,000 signatures from the six schools that have petitions.

But this isn’t the first COVID-19 related petition made by an FAU student recently.

The same day as Soto’s petition, junior Austin Wilder created a petition for students to be reimbursed for classes and housing disruptions.

“Students enrolled deserve and demand some reimbursement in the form of discounted tuition as credit towards their accounts,” he wrote.

And last week before an official announcement, junior Christanie Noel started a petition for all classes to be moved online and received 2,767 signatures in support.

“An end to this epidemic is no where near in proximity. This is our new reality and we must adjust accordingly,” she said.