The OK symbol — called “Owl Fingers” by FAU — is now being used as a white power symbol by Richard Spencer and the Christchurch shooter. But experts say that the gesture is fine to use if it’s in a harmless context.

The Anti Defamation League ruled the OK hand gesture, which is used as a symbol of school pride at FAU, a "racist" hand gesture. But experts say it's fine to use in the right context. Illustration by Michelle Rodriguez-Gonzalez

FAU’s “Owl Fingers,” the OK hand gesture that FAU students have long used as a symbol of school pride, now has a connotation of hate to people beyond the FAU campus.

As of November of last year, the OK symbol has been added to the Anti-Defamation League’s (ADL’s) database of hateful hand gestures, specifically to denote “white power.”

The ADL’s mission, according to their website, is to “have the courage to speak out against anti-Semitism and bigotry, discrimination and injustice — even when we stand alone.” The ADL has databases for hate symbols and incidents of discrimination, which now includes the OK gesture that FAU students would call Owl Fingers.

“Our gesture is meant to represent an Owl,” said FAU spokesperson Joshua Glanzer. “The University of Florida has the Gator Chomp, FSU has the Tomahawk Chop and we have Owl Fingers.”

Owl Fingers used to be seen prominently on FAU’s Traditions webpage, which highlights events like the Weeks of Welcome and fall football bonfire, but now is missing. This change seemed to have happened between May and June of 2019.

Glanzer said this about the removal: “The web pages are changed all the time for any number of reasons.” He also noted that students doing Owl Fingers can still be seen in photos on that page, although there is no description of it anymore.

Lonny Wilk, Senior Associate Regional Director of the ADL, said Owl Fingers at FAU doesn’t concern the ADL or the police if it is not attached to white supremacist incidents.

“In essence, if there are people within the student body that are not white supremacists then there’s nothing that would come up on our radar at all,” he said.

Wilk stated that the ADL Hateful Hand Gestures database is mainly for law enforcement to look for people who are already white supremacists to communicate with each other. There is a warning at the top of the page that tells the reader not quickly judge when evaluating the symbol. 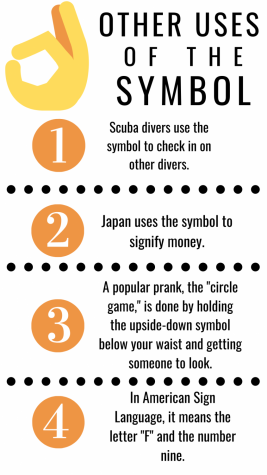 History behind the hands
The symbol has a history of being used by the Greeks as seen in pottery and by Buddhists as seen in some statues. The “OK” symbol in American history, according to the History Channel’s website, began in 1839 as a joke in a newspaper.

A Boston newspaper printed “OK” next to the phrase “all correct” — the joke being that “OK” was supposed to represent the incorrectly spelled “oll korrect,” the History Channel said.

The OK symbol took a turn and began its association with white power after a hoax on 4chan, an online forum used to communicate and spread ideas anonymously.

According to the ADL, users on 4chan took the symbol and falsely promoted the gesture as a symbol of white power in 2017.

“The hoaxers hoped that the media and liberals would overreact by condemning a common image as white supremacist,” the ADL website says. “The hoax was so successful the symbol became a popular trolling tactic on the part of right-leaning individuals, who would often post photos to social media of themselves posing while making the [OK] gesture.”

Brenton Tarrant, the shooter who killed 51 people in a New Zealand mosque last year, used the symbol during his court appearance for the shooting. Richard Spencer, president, and director of the National Policy Institute, a white supremacist lobby group, has used the symbol.

“It is unfortunate that a similar-looking hand gesture is now being used to spread views we find abhorrent and directly opposed to our mission as a higher education institution,” Glanzer said.
How do students feel?
Some FAU students are aware of the connection between Owl Fingers and white supremacy — but believe that context matters.

Michela Iosipov, a junior majoring in communication studies, said, “I would still use [Owl Fingers] because I grew up using that symbol as being ‘OK,’ and just because something bad and traumatic has happened using that symbol doesn’t mean I am for that negative symbol.”

“Outside of FAU, I wouldn’t use it, but it all depends on the context,” he said.

Eisha Baig, a freshman biology major, said, “I would not pin it on people that still use [the symbol], but if they’re not using it that way, they shouldn’t use it.”

Marcy Wilder is the web editor for the University Press. For information regarding this or other stories, email [email protected]