FAU shot poorly in both games against FIU while blowing a 14-point lead. 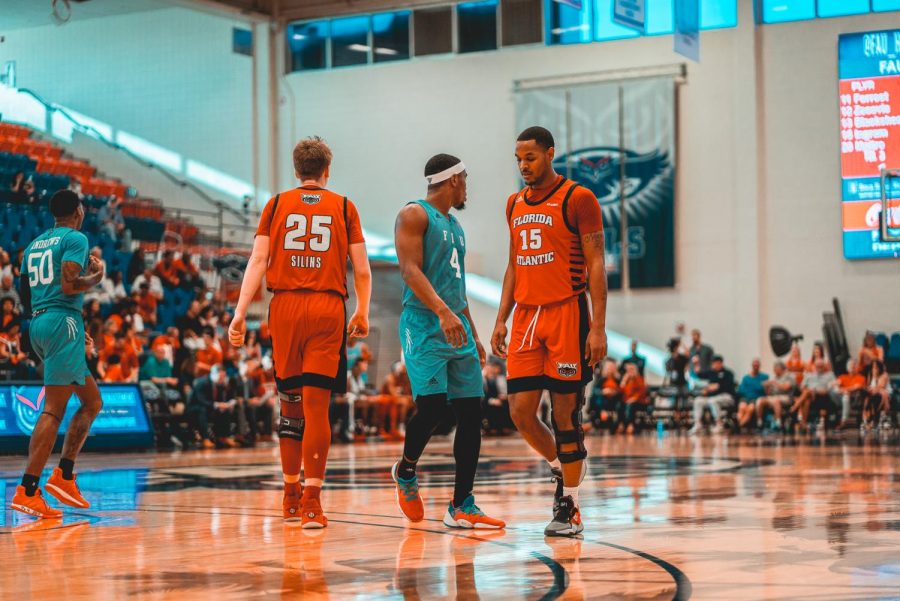 Karlis Silins and Jailyn Ingram combined for 21 points in the second loss to the Panthers in the season series. Photo by: Alex Liscio.

It was Rivalry Week across men’s college basketball, and in South Florida this week, the Florida Atlantic Owls and the Florida International Panthers battled twice, with both games ending poorly for FAU.

The first game, played Wednesday at University Park in Miami, was all Panthers. FAU led once in a 69-50 Panthers rout. Aleksandar Zecevic led all Owls in scoring with 13 points and added on five rebounds, but the Owls couldn’t get hot from beyond the arc, making only one of their 16 three-point attempts, which totaled 6.3 percent.

The second game, which was on Saturday, was a tale of two halves for the Owls. FAU forced FIU into more turnovers (14) than made field goals (11) in the first half. Karlis Silins would come off the bench and score 13 points, including a powerful dunk that ignited the packed crowd. It was also senior night at Abessinio Court, and the seniors helped pace the Owls in the first half. Cornelius Taylor hit his first two shots, both from the three-point line. Zecevic added tough interior defense, and the Owls took a 39-27 lead into halftime.

However, the second half would prove to be a struggle, as FAU would miss all of their 12 attempts from beyond the arc in the second half, and FIU’s Antonio Daye, Jr. would score 20 points as the Panthers would come back to beat FAU 66-59.

The story for the Owls was again the poor shooting from beyond the arc. The Owls didn’t make a three-pointer for the rest of the game after Michael Forrest’s successful attempt at 12:15 in the first half and the Panthers capitalized on the missed tries by making their shots, closing the Owls’ lead to six.

“We got stagnant, didn’t move the ball well at times, and we didn’t play the second half like we did the first,” said FAU head coach Dusty May.

This drops FAU to 6-6 in the conference with two conference games left in the regular season.

“We can either feel sorry for ourselves, or we can put our heads down and prepare for Southern Miss,” May said. “We have to continue to get better and find our rhythm, and then just trust each other a bit more.”

The Owls’ next game will be on the road at Southern Mississippi on Feb. 13 at 8 p.m.

After these two games, the conference begins “Bonus Play.” Bonus Play is based on the standings in the conference, and each team will play the other in its grouping in a round-robin style tournament before the true conference tournament starts. May says it’s imperative that the Owls finish strong, despite the close losses.

Joseph Acosta is a staff writer for the University Press. For information regarding this or other stories, email [email protected] or tweet him @acosta32_jp.