FAU were better rebounders on the night as they had 40 boards compared to UTSA’s 28. 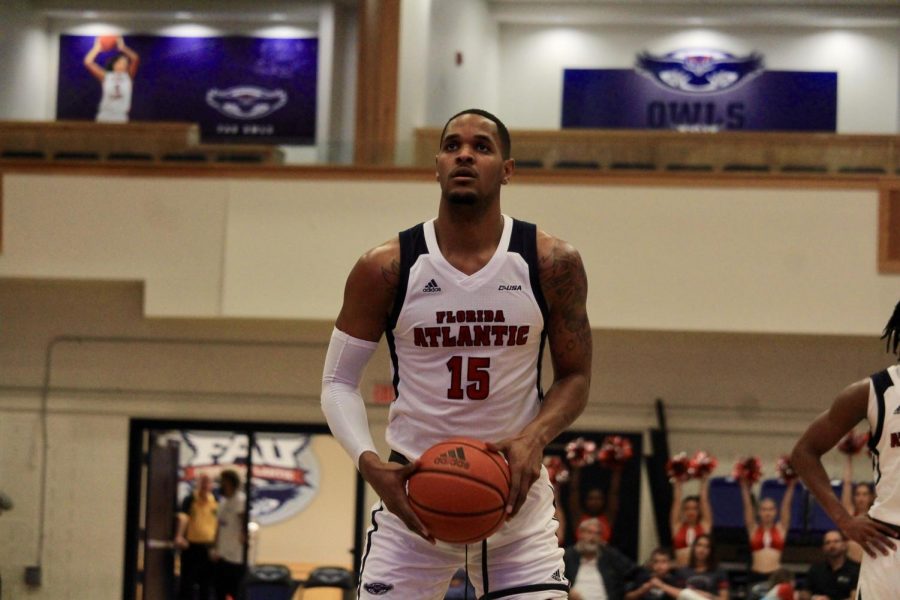 While reaching 1,000 career points for junior foward Jailyn Ingram, he recorded a double-double, scoring 13 points along with 11 rebounds. Photo by: Eston Parker.

In the last home game this season, the FAU Men’s basketball team earned a much-needed win Thursday against the University of Texas at San Antonio (UTSA) in the second game of bonus play, 80-71.

The Owls performed a competitive offensive game, playing consistently on both sides of the floor. FAU was better on the glass, out-rebounding the UTSA Roadrunners 40-28.

“We felt like one of our competitive advantages would be rebounding the basketball,” said Head Coach, Dusty May.

In the first half, FAU played a paced game and made strategic decisions with their ball movement and plays, where they led by 22 points and shot 50 percent from the three.

“It feels amazing just to know that I’m one of 14 that already did it here, it’s just unbelievable,” Ingram said.

In contempt of his leg injury, Ingram put up a total of 13 points and 11 rebounds, finishing with a double-double.

On pace with Ingram was sophomore, Michael Forrest scored the most points for his team with six three-pointers, ending the game with 21 points.

“I feel like last year, [Forrest] was a little more aggressive and I saw flashes of that from last year, tonight,” said Ingram. “He got to his spots, kept moving, got open shots, and knocked down his shots. He’s just buying into his role.”

As the second leading scorer in the nation, guard Jhivvan Jackson led UTSA to a come up with 38 points, while shooting 50 percent from the three.

“He earned all 38, he used every part of the rim, and, man, he’s a challenge to guard. He put on a show tonight,” coach May said.

The UTSA Roadrunners knew that they had to create effective plays that would feed their main shooter.

FAU’s win now puts them at sixth in the conference.