Coming off three straight losses, the Owls came together to win a close one at the RoofClaim.com Arena. 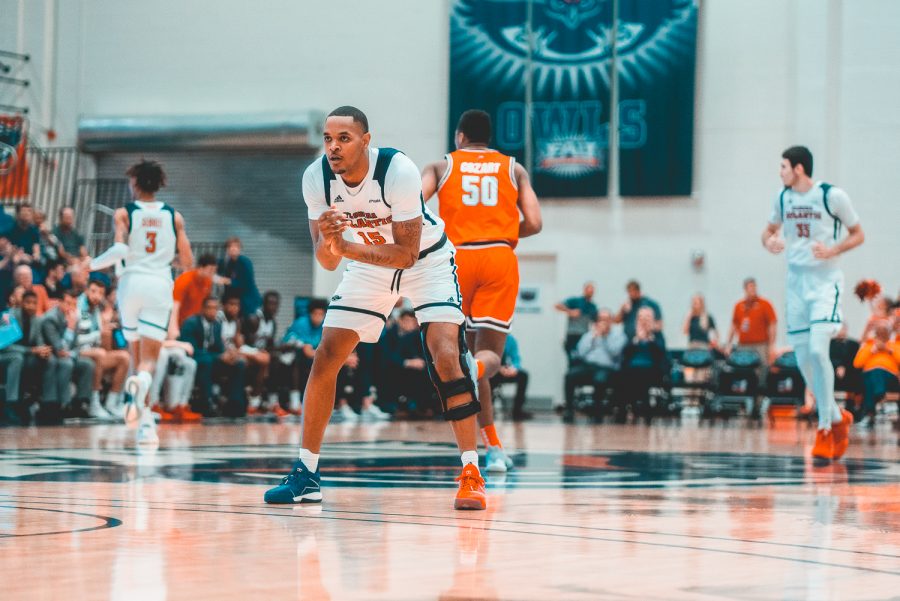 Forward Jailyn Ingram led the Owls in scoring with 16 points while making seven out of his 18 shots. Photo by: Alex Liscio.

It was a slow start for the Owls, who fell into a 12-0 hole to start the game. The Owls didn’t score their first basket until guard Cornelius Taylor drained a three-pointer at the 16:06 mark.

“We came out trying to play their game at first,” FAU forward Jailyn Ingram said. “Once we calmed down and began playing our game, it was fine.”

The Owls were able to climb their way back into the game and led 28-26 for a moment in the first half after two free throws from guard Michael Forrest with 4:56 remaining.

FAU kept it close for the remainder of the first half but trailed 33-30 at halftime.

In the second half, FAU buckled down on the defensive side of the ball, forcing the Hilltoppers to shoot just 35.5 percent from the field in the second half on 11-31 shooting and 1-6 from three-point range.

“Outside of some missed block-outs, I thought we defended really well in the second half,” FAU head coach Dusty May said.

The Owls and Hilltoppers went back and forth throughout the entire second half. There were seven ties and 10 lead changes during the final 14:26.

Ingram made the go-ahead basket for the Owls after rebounding an air-balled three-point attempt to give FAU the lead with 19.8 seconds left in the game.

On the ensuing defensive possession, FAU forced the Hilltoppers into a back-breaking turnover. The Owls called a quick timeout after inbounding the ball and Richardson Maitre was fouled on the possession following the timeout. Maitre sank both free-throws to seal the game for the Owls.

Four of the five FAU starters finished in double figures. Ingram led the way with 16 points, followed by Forrest with 12. Taylor and Karlis Silins finished with 10 points each. Forward Jaylen Sebree contributed 10 points off the bench.

“Jaylen Sebree off the bench came in and made huge shots, [some] nice rebounds and made big contributions,” May said. “[Taylor, Forrest, and Ingram] those guys have to score for us consistently for us to win.”

The Owls will look to carry the momentum from this win into Saturday’s contest against Marshall. FAU and Marshall will tip-off at 4 p.m. from the Burrow and will be broadcast on ESPN+.