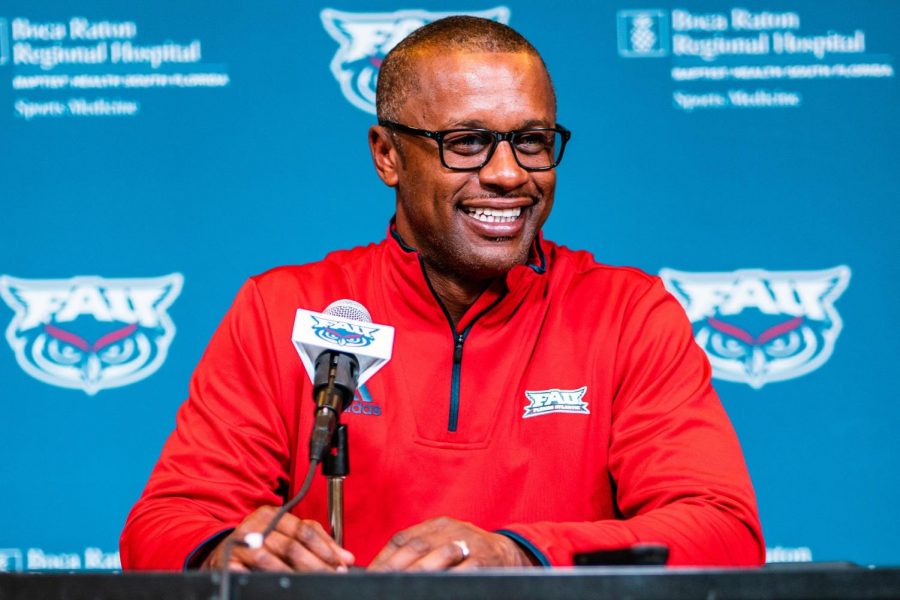 It has been an unusual first season at FAU for Taggart to say the least. Photo by: Alex Liscio.

In Willie Taggart’s first year as head coach for FAU, he finalized his 2020 signing class by adding nine recruits and five transfers on National Signing Day yesterday. This is in addition to the nine newcomers that were inked during the early signing period in December.

“Very, very excited about our class,” Taggart said. “Really impressed with our staff, especially with the short amount of time of putting together a class…Not only did we fill the needs with good football players, we filled the needs with great character kids and kids that are going to be about the right things.”

Taggart also talks about what traits and characteristics he harps on that he saw in the recruits.

“I think each and every one of those guys is a winner,” Taggart said. “I think they’re great character kids and they love playing the game of football. But, we look for tough, smart, highly competitive individuals and you can sense that each one of them has that.”

The new coaching staff has drastically changed since last year as former head coach Lane Kiffin took the job at Ole Miss. Taggart says that the transition will be like any other, learning from new experiences.

“It will definitely be some new learning,” Taggart said. “But we got a group here that’s very close and knows what it takes to win, and I think it’s important for us as coaches to teach our guys so it’s not dramatic, because if so, we take a step back.”

Below is the list of signees, with description, of who were obtained on National Signing Day:

Sound familiar? The son of the FAU head coach played quarterback for Florida State University High School where he threw for 2,165 yards and 20 touchdowns as a senior. He also added 876 yards and 10 touchdowns on the ground.

Going to school at Jones High School in Orlando, Florida, Anderson totaled 84 tackles, four for a loss and two sacks all in his senior season. This addresses a need at the defensive line after the loss of Ray Ellis and Tim Bonner.

Once again addressing a need, offensive lineman Atcavage previously committed to FSU under Taggart. He’s ranked by 247Sports as the No. 118 offensive tackle high school prospect. After the loss of various linemen like Junior Diaz and Brandon Walton, this recruitment was inevitable.

While he’s listed as a linebacker, he was a swiss army knife in his high school career, playing quarterback, running back and wide receiver. Taggart could use Johnson anywhere on the field, which could prove confusing for the opposing defenses. At Berrien high school in Nashville, Georgia as a defensive player, he totaled 120 tackles and five interceptions, but as an offensive player, he had over 1000 all-purpose yards.

At Coconut Creek high school, this linebacker posted 48 tackles and eight sacks in his senior year. As seen by his sack total, Jones could also rush the passer so he can play defensive end.

Jones played on both sides of the ball in high school but will play along the offensive line for FAU. Playing at Zephyrhills Christian Academy in Florida, he was credited with six pancake blocks, but on the defensive side, he had 26 sacks during his senior year.

Attending Edison High School in Miami, Florida, this defensive back totaled 91 tackles and two interceptions. He’s rated as a three-star recruit according to 247Sports.

Adding more depth to the defensive line, Wheeler in his senior season, had 58 tackles, five for a loss and a sack.

Here are the transfers:

The 6’0”, 180 lbs. wide receiver transferred from Florida State and didn’t catch a pass for the Seminoles. He’s a redshirt sophomore and could have an immediate impact.

Transferring from Clemson, he recorded 25 receptions for 206 yards and 3 touchdowns in 41 games during his collegiate career with the Tigers. He won two national championships with the team, their most recent victory against Alabama in 2019. He’ll be a graduate transfer.

Once again, just like Adams, Lamar is a redshirt sophomore who transferred from FSU. The defensive lineman played in four games last season and only recorded four tackles

The wide receiver, who previously enrolled with Cincinnati in 2018, entered the transfer portal in October. He was redshirted in the 2018 season, only catching one pass. He didn’t see the field in the 2019 season but will have a lot of opportunities at FAU.