FAU Baseball: The Owls remain perfect on the season after a series sweep of the Binghamton Bearcats

On a weekend with more weather delays, the Owls were able to remain undefeated. 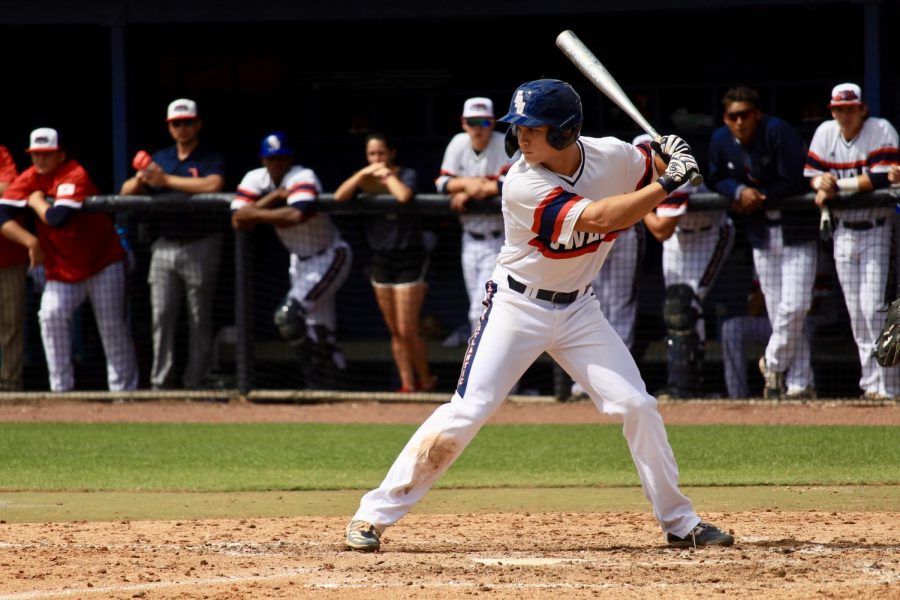 Outfielder/Pitcher Mitchell Hartigan had five hits and racked in five RBIs during the series sweep against Binghamton. Photo by Eston Parker.

The FAU Owls (7-0) faced another weekend of weather delays as they completed a sweep of the Binghamton Bearcats (0-6) to remain perfect on the season.

Sophomore pitcher Jacob Josey got the start on the mound for the Owls in game number one. He pitched 5.1 innings, giving up six hits, earning five runs and striking out four batters.

“[Jacob] Josey will learn from this, he’ll continue to grow, extend that pitch count, and understand the mental side of it a little bit better,” FAU Baseball coach John McCormack said.

Trailing 8-2 in the bottom of the eighth inning, the Owls were able to score six runs to tie things up before heading to the ninth inning. Right fielder Bobby Morgensen started the scoring for the Owls in the eighth inning when he ripped a two-run double into left field, cutting the Bearcats lead to 8-4.

Left fielder/Pitcher Mitchell Hartigan hit a single into right field that would score Morgensen. A few batters later, infielder Alex Arauz, hit a three-run home run that tied things up headed to the top of the ninth inning.

Mike Entenza pitched a scoreless 1-2-3 inning for the Owls in the top of the ninth. Hartigan hit a sacrifice fly in the bottom of the ninth scoring Morgensen for the walk-off win by the final score of 9-8.

While the Owls were able to escape Friday night with a win, Coach McCormack wasn’t satisfied with their overall performance on the night.

“We didn’t play well, we made a fair amount of mistakes both on the mound and in the field,” McCormack said. “In the end, the Owls win and that’s a good thing.”

Arauz led the Owls on offense, going two for three with four RBI’s. Entenza recorded the win for FAU, his second of the season.

Game number two was supposed to be played on Saturday afternoon, but due to the poor weather and field conditions, the game was postponed to Sunday morning.

The Owls were on the board first in game two when first baseman Andru Summerall singled to right centerfield scoring second baseman Francisco Urbaez.

Outfielder Jackson Wenstrom led the Owls offense in game two, going two for four from the plate with three RBI’s.

Adrien Reese recorded the win for the Owls pitching 2.1 innings in relief and gave up two runs on four hits and struck out four batters.

The Owls would go on to win game number two by a score of 9-4.

Game three started thirty minutes after the end of game number two. Freshman pitcher Dante Visconti drew the start in the final game for the Owls.

Summerall started the scoring for the Owls in the third inning when he was walked with the bases loaded, scoring Wenstrom from third base. The Bearcats would tie the game at 1-1 after an RBI double in the top of the fourth inning.

Wenstrom hit a three-run homerun in the bottom of the fourth inning to give the Owls a 4-1 lead. It was Wenstrom’s first homerun of the season.

The Bearcats cut the lead to 4-3 after scoring two runs in the top of the sixth inning. Entenza came into the sixth with two outs and runners on the corners. He delivered a strikeout to end the Bearcats threat and dealt a clean 13-pitch seventh inning.

Nicholas Toney, Morgensen, and Wenstrom; combined to go 7-14 with six runs scored, seven RBIs and each had a home run.

“We hit some home runs, Nick Toney, [Jackson] Wenstrom, we did some good things,” McCormack said. “Overall in general we just got to play better.”

Hartigan would come in to pitch a scoreless 1-2-3 inning in the ninth to seal the 11-4 win for FAU.

The Owls will head into their most difficult stretch of the season with the next five games coming against teams ranked in the top 15 nationally.

“It’s always good playing the first seven at home and to get them under our belt,” McCormack said. “Now we have some challenges ahead of us, but we’ll be ready.”

The Owls will head to Tallahassee for three tough games this Friday and Saturday. The first game will be at 1 p.m. against the number two team in the country according to baseballamerica.com, Texas Tech, and will then play number 12 Florida State later Friday night and again on Saturday.

Jensen Jennings is a staff writer for the University Press. For information regarding this or other stories, email [email protected] or tweet him @Jensen_Jennings.