The Center for IDEAs hosted Yusef Salaam on Friday to talk about his wrongful conviction and lessons he learned about hope and fear. 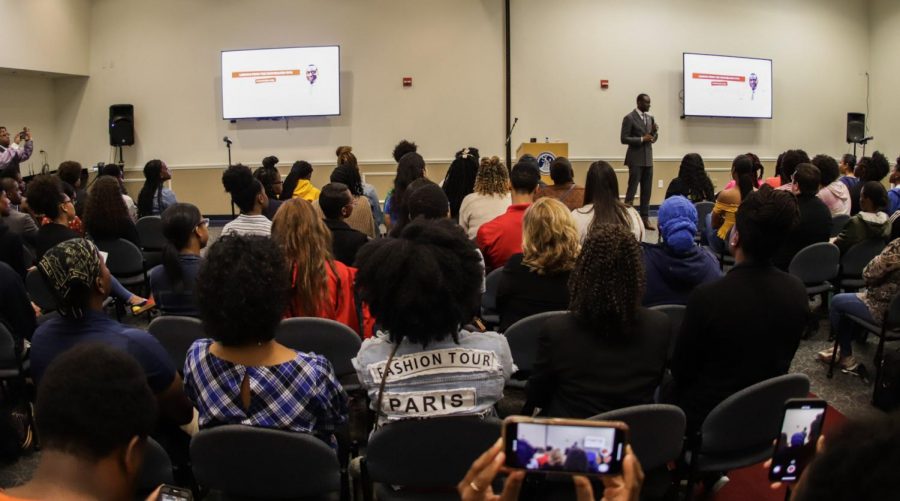 Yusef Salaam, one of the Central Park 5, spoke at FAU last Friday. Photo by Jesse Gann

Yusef Salaam spent six years and eight months in jail for a crime he didn’t commit.

He’s one of the “Central Park 5,” a group of five teenagers — four Black, one Latino — that were convicted in April 1989 for raping and assaulting a woman in New York. They spent between six to thirteen years in prison and were all exonerated years later.

“They would rather have us occupy a jail cell than a college dormitory,” Salaam, now 45, said to a group of around 200 FAU students and faculty on Friday in the Majestic Palm Room. Salaam discussed his story of survival through the conditions of injustice while also interweaving lessons on the importance of living a full life.

For this year’s Black History Month, FAU’s Center for Inclusion, Diversity Education and Advocacy (IDEAs) is honoring African-American heritage and paying tribute to the civil rights activists who paved the way for racial equality and empowerment through a series of events.

Salaam was just 15 years old when he was arrested. The other four boys spent up to 13 years behind bars. They became known as the “Exonerated Five,” after another man confessed to raping the jogger. Netflix released an adaptation of Salaam’s and the four others’ stories called “When They See Us” last year.

Through bits of laughter between quoting Cardi B and belting out a few rap lyrics of his own, Salaam addressed serious topics, like the value of unity in marginalized communities during times of hardship and importance of perseverance against all odds.

“To leave anger and bitterness in the past so that it does not shape your present, students can be the change they desire to see in society,” he said. “Creating visions in one’s mind and  connecting them to your reality to manifest your desires. Remember that you have a purpose and to conquer your fears.”

One of the most notable responses to the incident was Donald Trump’s. Two weeks after the assault, Trump placed four full-page newspaper ads worth $85,000, the Guardian reported, that said: “I want to hate these muggers and murderers. They should be forced to suffer and, when they kill, they should be executed for their crimes. They must serve as examples so that others will think long and hard before committing a crime or an act of violence.”

“I love events surrounding the Black community, especially events that bring light to marginalized groups,” said Rachelle Saint Louis, director of the mental health programming branch of Student Government, PEP Talk. “This is something that needs to be talked about and something that we need to change for the better. I am so thankful that we had Dr. Yusef Salaam here to speak to us because it adds that personal touch.”

Salaam centered his speech around one main lesson: to live a full life. He felt it was important for the students of today to “project yourselves,” into the future by staying optimistic.

Salaam closed his speech with this statement:

“The Central Park Jogger Case is not what most people think it is, this thing, that people have found and heard about is actually a love story between God and his people. It is a story of a criminal system of injustice turned on its side in order to produce a miracle in modern time. A story of how people can be brought together only to rise because the truth can never stay down. It is a story of people buried alive and forgotten,” he said. “Instead of a social death, we emerged like a phoenix from the ashes, because as they built a fire to consume us, they forgot the oil.”

Darlene Antoine is a contributing writer for the University Press. For information regarding this or other stories, email [email protected]