Around 90 students listened to educated panelists on mental health stigma in the Black community. 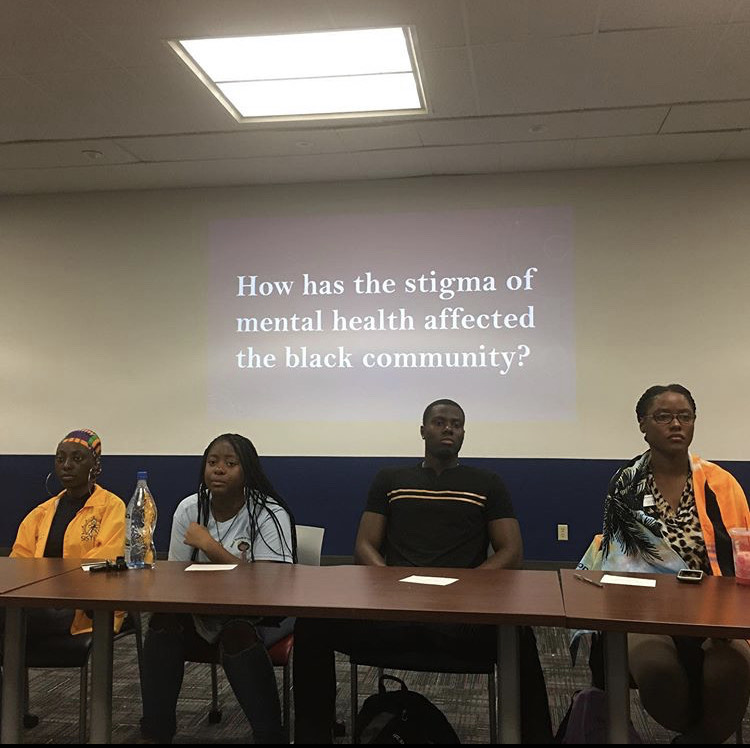 Left to right: Aaliyah Fisher, Ronelle Harper, John Mitchell and Samantha Dupuy at this week's panel on mental health in the Black community. Photo courtesy of Center for IDEAs

Editor’s note: If you have thoughts of suicide, support is available. FAU’s Counseling and Psychological Services crisis hotline is 561-297-3540 and you can see their hours here.

FAU student and panelist Nathaniel Clerveaux-Jean chose to speak up about mental health in the Black community on Feb. 4  because he has been on the other side of the issue with his little brother who recently became hospitalized for 42 days due to mental health conditions.

Clerveaux-Jean said, “I’ve been in conversations where people with mental health issues were looked at as weird. I even have a little brother, who recently went to the hospital around Thanksgiving for mental health conditions. He was always looked at as weird because he would never really socialize with people his age. By the time I was already off at college, he was having a big break down because he felt really alone.”

Clerveaux-Jean believes that when people do not understand the stigmas surrounding mental health, it is best to educate others instead of talking about somebody with mental health conditions in a negative way. He wants to encourage others to discuss mental health in the Black community and be open to communicating with others when they are unaware of the battle’s people are facing.

Konbit Kreyol, a Haitian organization on campus, was one of many organizations that came out to discuss mental health. Other organizations and departments on the mental health panel included the FAU Chapter of  Progressive Black Men Incorporated, Sistuhs Incorporated, Alpha Phi Alpha Fraternity, The National Council of Negro Women, Black Women in Medicine, Caribbean Student Organization, Student Health Advisory Council, and Counseling and Psychological Services.

Here are the four main takeaways these organizations wanted people to know about mental health:
Breaking the stigma
A common goal the panel has is to break the stigmas surrounding mental health in the Black community.

Senior biology major Alieia Dennis representing the Carribean Student Organization said, “The stigma of mental health has impacted the black community in a negative way. Black people don’t feel inclined to speak about the things that bother them, we internalize everything that happens … it creates tension in your body.”

Rachelle Saint Louis, director of Student Government’s mental health organization PEP Talk, wants to create a safe space for students to address mental health. Opening up the conversation, Saint Louis performed an original poem titled, “Recipe For a Girl Like Me” that depicts her experience navigating mental health as a Black woman.

“We want to help people address mental health stigma … so that’s why we host events like this so that you do feel comfortable speaking up,” said Saint Louis.

Higher education leadership graduate student Samantha Dupuy thinks mental health stigmas are a “negative aspect that prevents you from being able to showcase and share what is going on in your mind,” as she stated representing National Council of Negro Women.

Psychology major and PEP Talk associate Tiara Wilbert says, “A mark of disgrace associated with a particular circumstance, quality, or person. So, we have to understand that the stigma starts with you in order to stop with you … we must speak up in order to stop the cycle and break the chain and be more aware to be more knowledgeable about what’s happening in our world.”

“I believe we did learn to talk and express how we felt but when we did it was pathologized, when we did there were disorders created to say that there was something completely wrong with who we were. So, I think beyond the stigma there is a sense of self-protection because of what the field I’m in did to Black folk” said Bratini.

Dupuy believes that stigma prevents people from actually showcasing what resources are actually available to us. While the lack of communication is a factor contributing to mental health stigmas, the lack of concern for mental health until it takes the lives of black youth needs to change.

“Last year I was a third-grade teacher, I’ve literally seen eight-year-olds say, ‘I want to kill myself.’ It’s unfortunate, but again, that’s why we’re here” said FAU alumni Austin Harris.
Know the warning signs
Many African-Americans have problems recognizing the signs and symptoms of mental health conditions, which leads to the misunderstanding of it and the impacts a mental disorder can have on individuals.

Each mental illness has its own symptoms, but common signs of mental illness in adults and adolescents can include the following, according to the National Alliance on Mental Illness: excessive worrying or fear, feeling excessively sad or low, confused thinking or problems concentrating and learning, extreme mood changes, including uncontrollable “highs” or feelings of euphoria, prolonged or strong feelings of irritability or anger, abuse of substances like alcohol or drugs, and thoughts about suicide.

“To think that someone is just sick or weird is pretty closed-minded. Thinking about how complex we are as people just push for open-mindedness” says Alpha Phi Alpha Fraternity member John Mitchell.

Assistant Director for the Office of Diversity Education and Training David Bynes challenged the audience to start educating yourself first about mental health.

“You have to educate yourself first, it doesn’t start with the kids, it starts with you. You have to see things for what it is, not what you want it to be. A lot of what causes mental health from the stigmas to the actual outcomes of it is socially engineered,” said Bynes.

Following this information, audience members joined in a game of Kahoot centered around mental health-related topics and ate free pizza.
Take care of yourself before others
PEP Talk encouraged students to invest in self-care as they handed out adult coloring books, essential oils, pens with motivational statements, buttons, flyers and CAPS pamphlets.

Harris responded, “Mental health means maintaining your peace of mind, without peace of mind you really can’t be you. Exert the kind of energy that you want to receive in this world.”

Following these questions, blank pieces of papers were passed out to the audience for an ice breaker activity called “I am” to become comfortable with the skin that you are in.

Joshua Mokua wrote down that he is strong and said, “Mentally, it’s good to be strong. Going out in the world times get hard, you always must have a strong mindset and know what is going on internally. Hold yourself accountable and keep yourself grounded so the things of this world don’t sweep you off your feet.”

Audience members learned practices outside of therapy such as meditation, yoga, or breathing techniques can be a benefit to develop self-expression and take care of individual mental health.
Don’t be afraid to ask for help
The panelists wanted students and community members to feel comfortable asking for help when dealing with mental health issues.

Dupuy said, “If you don’t know why this is happening, then you won’t know how to solve it.”

The discussion closed with a poem read by Wilbert and following this with a powerful song performance from FAU freshman and health science major, Kimberly Nolan of “I’ll Rise Up” by Andra Day.

Senior and health science major Danielle Thomas has an appreciation for events like these and says, “Mental health needs to be talked about more to decrease stigma and help everyone in our community.”

Destiny Harris is a contributing writer with the University Press. For information regarding this or other stories, email [email protected]