The film directed by Bong Joon-Ho is now playing at the Living Room Theaters at FAU and has been nominated for six Academy Awards. 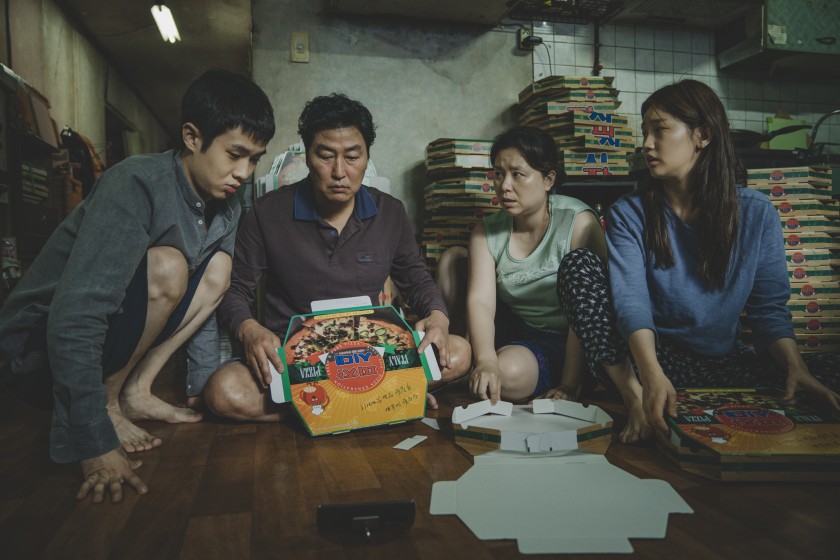 The Kim family (shown above) is the focal point of Bong Joon-Ho's "Parasite," now playing at the Living Room Theaters at FAU. Photo courtesy of NEON.

“Parasite,” directed by South Korean filmmaker Bong Joon-Ho, could be one of the most thrilling and funniest movies of the year. Now playing at the Living Room Theaters on the Boca campus, the Oscar-nominated film is a must-watch and its social commentary make it a standout.

Joon-Ho presents a fresh interpretation of class struggle that’s similar to his previous films, “Snowpiercer” and “Okja.” But “Parasite” is just another example that showing class struggles is his biggest strength. The South Korean filmmaker integrates the themes with his characters and the setting gives the film an extra spark.

The film focuses on a low-income family that lives in a semi-basement apartment in South Korea. The living conditions are so desolate that the family steals Wi-Fi from the building next door. They open their windows when the neighborhood is being fumigated and, on occasion, they deal with a drunk man who urinates right outside their place.

Their only source of income is by folding pizza boxes for a delivery service until an opportunity arises for Ki-Woo (Choi Woo-shik) and his family.

A childhood friend plans to go abroad and offers him a job in his absence to tutor a young girl from a wealthy family. Once he accepts the job, he conceives an elaborate plot to employ his entire family and get a taste of the upscale life in the process.

They cleverly act like they’re not related, taking individual jobs at the house which include the father Ki-taek (Kang-ho Song) as the chauffeur, his daughter Ki-Jung (Park So-dam) as an art therapist and the mother Choong-sook (Jang Hye-jin) as the housekeeper.

The Kim family is very meticulous in overtaking the house within their positions in a way that’s parasitical in nature. This builds up through the first half of the movie to act as a social satire in the way the upper and lower class counter each other. But really, the way the first act is paced is near perfect.

One of the best compliments to this film is how Joon-Ho shifts the tone of “Parasite.” Compared to comedies released this year, the film’s humor is clever and never feels forced or pushing for a cheap laugh. The family in focus has a sense of humor about the way they live and once their plan goes into fruition it keeps that light-hearted tone.

But, there comes a turning point in the film which takes the story from black comedy to a nail-biting rollercoaster.

When the movie shifts into a darker, serious tone, it feels seamless. There’s never a tonal battle because the situation feels so real, which is due to the performances by the actors. Everybody gets the spotlight whether it be from the two opposing families. You feel connected to each character, seeing their motivations and weaknesses.

The screenplay deserves a lot of credit here, but the masterwork of Joon-Ho behind the camera is hard to ignore. The visual cues in the film emphasize the theme of social classes and the difference between the two. The subtlety of showing the rich Park family living comfortably while everyday, the struggling Kim family has to take countless amounts of stairs down to their home shows this class conflict.

Another example in the film is the Park family looking at the elegance of a rainstorm while at the same time the poor family’s home is flooding and causing destruction to their home. While those scenes are throughout the movie, it never holds your hand explaining its intelligence.

A highlight in the film is the rich Park family looking at the elegance of a rainstorm while the poor family’s home is flooding during the same time.

Most of the film takes place in the Park family house, and over time, the setting becomes its own character as the audience uncovers more and more about the secrets that it holds.

Brilliantly crafted, “Parasite” is almost flawless all around. The only criticism that popped out was that the ending felt it had multiple endings. You thought it was going to end, but it kept going and going. However, it’s a minor flaw that gets overshadowed by the acting, cinematography, screenplay and visual storytelling.

Released in October, “Parasite” was nominated for six Academy Awards, has made $137,222,594 worldwide and is now playing at the Living Room Theaters at FAU.