Staff predictions: FAU takes on UAB in the Conference-USA championship

This is FAU’s second C-USA title game in the last three years. 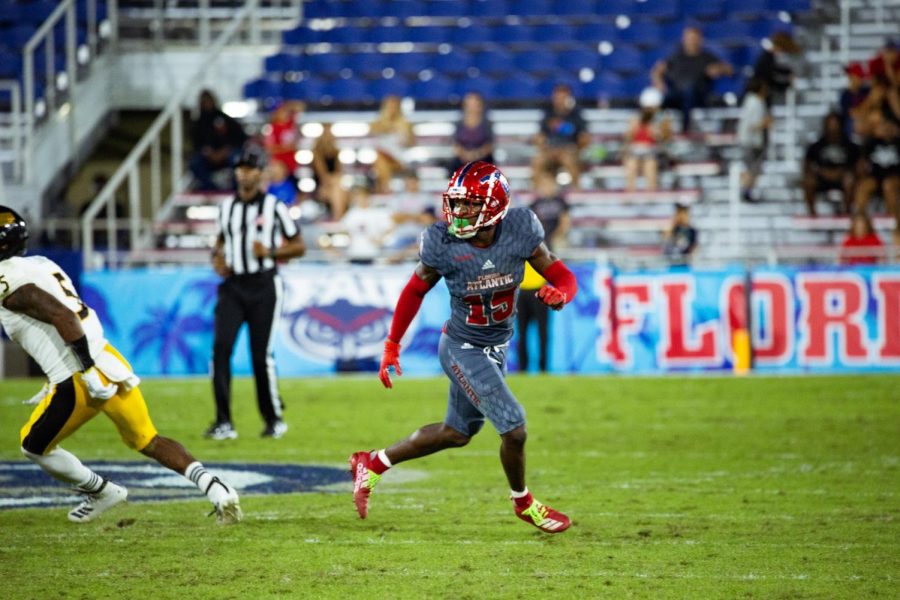 The defense for the Owls has been a standout this season, especially cornerback Meiko Dotson who recorded two interceptions in the win against Southern Mississippi. It brings his total to eight which is the most interceptions in a single season in program history. Photo by: Alex Liscio.

FAU looks to win its second conference championship in the last three years against the defending champion, the University of Alabama at Birmingham Blazers on Saturday. With the win against Southern Mississippi last week, the Owls won the East and have the benefit of the game being played in Boca Raton.

Here are the predictions from the University Press sports staff:

The highest-scoring offense in the conference versus the defense that allows the fewest points. FAU v. UAB is a marquee matchup in Conference USA. However, this game could very well be a low scoring affair because of the dominant defenses on both sides. UAB has sacked the quarterback at a fantastic rate, with a total of 43 on the season, so the offensive line for the Owls needs to come up big to give quarterback Chris Robison time in the pocket to make his progressions.

While only allowing 18.5 points per game, the eye-opening stat may very well be that the Blazers have let opposing running backs rush for 92.3 yards per game. Despite the resurgence of BJ Emmons and the potential of Malcolm Davidson, FAU will have a hard time running the ball due to the speed and athleticism of UAB’s defensive front seven.

Let’s not forget how good FAU’s defense has been, leading the nation in interceptions with 19. Quarterback for UAB Tyler Johnston III has been prone to causing turnovers, throwing 13 picks this season. For the Owls to squeak out the conference championship with a win, their defense needs to be stout with the offense being just good enough to outscore the Blazers.

An important key in this game is going to be the FAU offense going up against one of the top defenses in the conference and nation in UAB. According to the NCAA, UAB is fifth in the nation in rushing yards allowed, only giving up 92.3 yards on the ground, and seventh in the nation in yards per carry, allowing 2.81 per every run.

They’re also among the best at getting after the quarterback, registering a sack on 8.73 percent of opponent passes and averaging around three sacks a game. Their defense heavily resembles UCF’s, a team that FAU lost to badly earlier in the year. UAB plays a lot of man-to-man defense, and has an aggressive pass rush led by linebackers Kristopher Moll and Jordan Smith. If the Owls can protect QB Chris Robison and give him time to get the ball to receivers John Mitchell, DeAngelo Antione and tight end Harrison Bryant, the Owls will win this game. If not, it could mean trouble in paradise.

UAB is a team that relies heavily on their defense to win games. The Blazers are only allowing 18 points in their eight conference games. Their offense has played great against C-USA teams with losing records, averaging 28 points in those five matchups. When they’ve gone up against teams with a winning record and a solid defense they tend to struggle offensively, averaging 11 points in those three games with a record of 1-2. If the Owls are going to win this game, their defense will need to continue to force turnovers and get the ball back in the hands of the offense.

UAB’s quarterback, Tyler Johnston III, is only completing 59 percent of his passes and has thrown 15 touchdowns and 13 interceptions. Johnston has missed three of the last four games for the Blazers. Redshirt freshman Dylan Hopkins has started in his place and has completed only 53.1 percent of his passes for 483 yards, two touchdowns and three interceptions. This should be another game where the Owls will be led by their defense. If Chris Robison and the offense get out to an early lead, I don’t think UAB will have the horses offensively to keep pace.

This will be the toughest test yet for FAU’s rushing game as they face a tough defense in UAB’s front seven. The three headed attack of Emmons, Charles and Davdison will need to produce early as FAU’s offense relies on using the run to set up the pass. Harrison Bryant continues to make big time plays all over the field, and provides a matchup problem for any defender who covers him. Expect Robison to lean on him as he has done all year when the Owls need a big catch. FAU’s offense has been surprisingly good all year, and this game should be no different.

Defensively, the Owls are the most opportunistic team in the country. They lead the nation in interceptions with 19 and CB Meiko Dotson is tied for the most individual picks with 8. If they can turn the ball over with the same success they have enjoyed all year, UAB will be in for a very long day.

Realistically, UAB defense will need to hold the Owls well under their 34.1 scoring average. They lack the offensive weapons to win a shootout and are not built to make big comebacks. If FAU establishes the run early, this one could be all Owls.

UAB’s defense will be a tough challenge for Chris Robison and the Owls, as they rank 15th in the nation in points against per game (18.5) and fifth in the country in yards against per game (269.8). This unit is led by linebacker Kristopher Moll, who currently has 86 total tackles, eight sacks, and three forced fumbles.

As we’ve seen in FAU’s losses this season, the Owls don’t match up well against teams with pass rushers like Moll. I think that UAB will be able to put enough pressure on Robison to get him rattled, which will ultimately cost the Owls the game.

We saw what happened in this same situation against Marshall. UAB seems to be the team that could truly force the Owls offense to make the most mistakes, which is why I have the Blazers winning this one in a close, low scoring affair.

UAB provides as tough a challenge as a team can provide for FAU. UAB head coach Bill Clark is one of the best coaches in Conference USA and can provide a game plan that is tough to stop for FAU. UAB plays as good defense as anyone, leading Conference USA in yards allowed (269.8), sacks (43) and rushing yards allowed (92.3). UAB running back Spencer Brown caught fire last week, rushing for 111 yards and a touchdown on 19 carries and could provide some problems for FAU. FAU’s defense, which leads the league in turnover margin, should be able to continue that consistency this week, as UAB quarterback Dylan Hopkins has thrown four interceptions on just 78 attempts.

FAU enters this game at 9-3 overall. They also have some good momentum as they have won their last five games and have outscored their opponents 37.4 to 15.4 points per game over that stretch. The Owls went 4-2 at home this year and will have home-field advantage against the Blazers. UAB has had a solid 9-3 season thanks in large part to their elite defense, which ranks top five in total defense in the NCAA. The Blazers come in with some solid momentum as they have won their last three games in a row but they have gone a mediocre 3-3 on the road this year.

FAU quarterback Chris Robison has 22 touchdowns to just five interceptions and has amassed 3,129 yards passing. The Blazers don’t possess the same offensive firepower as the Owls and FAU’s offense has gotten more dynamic as the season progresses, but UAB’s defense is absolutely stifling. With that being said,the game will be decided by the Owls ballhawking secondary who will seize the day against the Blazers lackluster offense.