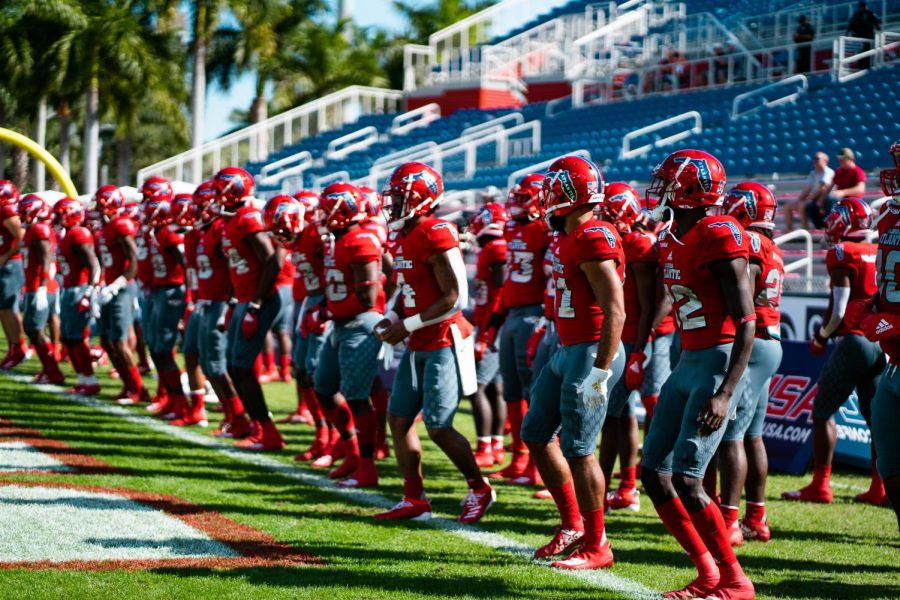 FAU Owls on the sidelines during a game against the UAB Blazers on Dec. 7th. Photography by Photo editor Alex Liscio.

In Willie Taggart’s first signing day as the new head coach for FAU, the program saw nine newcomers join for the 2020 season.

Wednesday was the first day of the Early Signing Period and also when high school seniors and junior college players can sign their letters of intent.

The period goes through Friday with the general signing day being on Feb. 5.

Below is the list of players, with description, who will join the Owls in 2020:

The 6-1, 288 lbs. Defensive tackle from East Central (Miss.) Community College was the first to commit to coach Taggart. According to 247 Sports, Dempsey is ranked No. 80 junior college (JC) player, No. 8 JC DT and No. 18 Florida JC player.

He could contribute early for the Owls as their depth at defensive linemen is shortening year after year because of players being in their final or penultimate season.

Another huge signee for the Owls was the 6-5, 295 lbs. offensive lineman from Copiah Lincoln Community College. Dolcine is ranked by 247 Sports as the No. 20 junior college player, No. 2 JC offensive guard and No. 3 overall Florida JC player.

Building up the trenches was a priority for this team and Dolcine is one of the few recruits that Taggart has brought in to help in that area.

The Alabama native plays defensive end and 247 Sports has him as the 80th best player in the state.

In high school in his junior year, he had 56 tackles, 20 of them for a loss and four sacks. The 6-2, 280 lbs. Lineman forced four fumbles, recovered one and blocked two punts on special teams.

Krakue, a 6-2, 210 lbs. defensive end attends Sprayberry High School in Marietta, Georgia and is set to graduate with the class of 2020. 247 Sports has Krakue ranked No. 41 defensive end in the country and the No. 89 ranked player in the state of Georgia.

This was a significant move for the Owls as Lamas is expected to play center with Junior Diaz being in his final season of eligibility.

Lewis, a linebacker that attended Tampa Bay Tech High School, was FAU’s first official signing and committed to the Owls in December of 2018. He was expected to join the team over the summer, but he was recovering from a gunshot wound to the back.

In his senior year at Tampa Bay Tech, he had 63 tackles, 14 for a loss and four sacks.

The Georgia native recorded 24 tackles in his senior year at Carrollton High School. He also had 7.5 tackles for loss, five of those ended up being sacks.

The signing of McKithen was a necessity for FAU as wide receiver depth was getting thin because of Deangelo Antoine and Dante Cousart being in their final year.

He averaged 23.8 yards per catch and had eight touchdowns this year at New Hampstead High School in Bloomingdale, Georgia.

While he’s listed as a Safety, Toombs is a swiss army knife, meaning he’s a multi-position player. He was a finalist for the Naples Daily News defensive player of the year.

In his senior season at Immokalee High School in Florida, he had five interceptions, one returned for a touchdown.

While that covers the signees and the one transfer, there has been one major decommitment.

Frank Gore Jr., who committed with FAU in June of 2019, has flipped and is signing with C-USA rival Southern Mississippi.

While Gore Jr. hasn’t said his main reason for the decision, one could speculate about many different reasons.

According to 247 Sports, his main recruiter was Kevin Smith, former running backs coach for FAU that has since joined Lane Kiffin at Ole Miss.

Also, running back is arguably the deepest position on the Owls as Malcolm Davidson, Larry McCammon III, James Charles, BJ Emmons, and Chauncey Mason are eligible to return next season.