The Owls held the Golden Griffins to only one three-pointer in another close game at home. 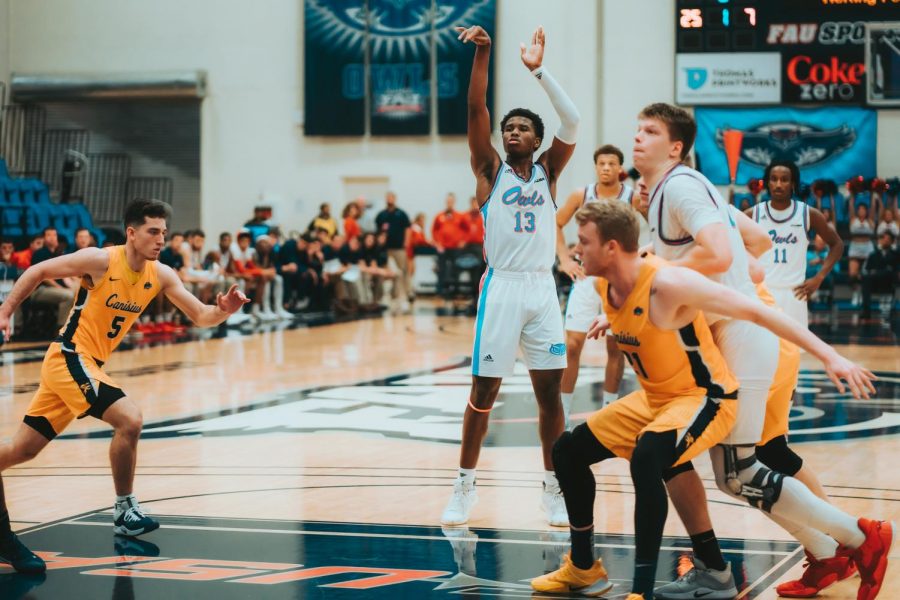 Kenan Blackshear was a major contributor for FAU in last nights win over Canisius where he scored nine points to go along with seven rebounds. Photo by: Alex Liscio.

FAU continued their streak of games coming down to the last second with a close 62-59 victory over the Canisius Golden Griffins Wednesday at Abessinio Court.

In a game with 19 lead changes and 10 ties, every point mattered. The Owls, despite only shooting 38 percent from the field for the game, made six of their 20 three-pointers. The Golden Griffins were held to just one three-pointer made on 16 tries, coming out to just 6 percent.

“Our guys did a great job in the second half when they were away from our bench, and we were changing into our defenses,” FAU head coach Dusty May said. “We haven’t been great in our zone this year, so for us to be able to use that as a weapon in this game like this when everyone is tired and fatigued, and we found a way to out-rebound them late.”

That Owls defense held Canisius’ leading scorer Malik Johnson to 12 points, where he shot five of 16 from the field. FAU also outrebounded Canisius by four, and those rebounds came up big in the later moments of the game.

The Owls offense was spearheaded by Karlis Silins, leading all scorers with 15 points, including two three-pointers made and he added some clutch rebounding late.

But it was the performance of unsung players like freshman Kenan Blackshear and sophomore Madiaw Niang that propelled the Owls on a night where neither Cornelius Taylor nor Jailyn Ingram were especially efficient offensively. Blackshear had only nine points, but contributed seven rebounds and multiple hustle plays, including diving into the announce table to save the opening tip. Niang was a menace on the boards, grabbing six total rebounds, including multiple clutch offensive rebounds.

“It just shows how deep our team is. On a night where Scoot [Taylor] or J.I. [Ingram] might not have the best performance, other guys can come and fill the role,” Silins said.

This moves FAU to 5-4 on the season, with another home game up next on December 14. The Owls will be looking to add on to their winning ways when they host High Point University from High Point, North Carolina, in Boca Raton at 4 p.m.