From now on, Owlsley will have some company on the field: a smaller owl mascot named Hoot. 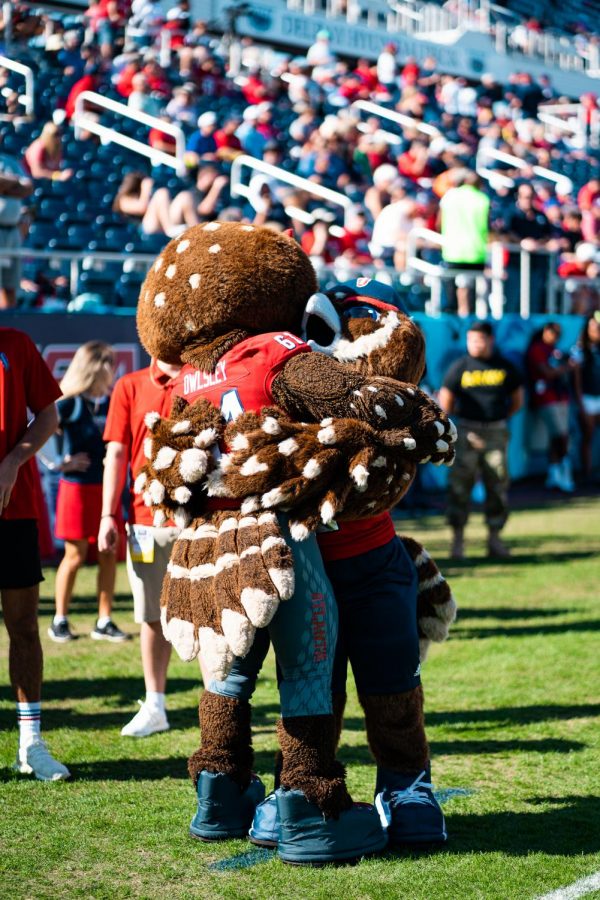 In the eight years since Owlsley was introduced to the FAU community, the mascot has become a popular fixture at athletic events and a photo opportunity for students. This semester, the university introduced an additional smaller mascot named Hoot. But who is Hoot?

Hoot, according to their official page on the FAU website, is an “adventurous” partner to Owlsley.

“Walking through the FAU Preserve, Owlsley met a gopher tortoise who spun a tale of an adventurous baby burrowing owl…Looking high and low, Owlsley soon tripped over a small burrow and Hoot emerged. They talked for hours about life, love, and FAU. After that, the two were inseparable,” the website reads.

But in reality, Hoot is the result of years of creative planning, said Assistant Director of Student Activities Richard Mahler. Hoot was added to the FAU Spirit Team this Fall at the FAU-FIU football game in November.

FAU created a second mascot to grow the mascot team and allow for mascots to be present at more sporting events.

“Hoot was an idea that was in the works for the last few years,” says Mahler. “The team knew that they wanted a smaller Owl with Owlsley-like characteristics but with a more cartoon-like appearance.” Mahler also says that the inspiration for a second mascot came from his predecessor, Jamie Ortiz.

FAU partnered with the costume company Street Characters to make the suit for Hoot, according to Mahler.

“Because Hoot’s appearance is standardized with a jersey, shorts, and sneakers, the additional cost of Owl feet and accessories did not apply as it does with Owlsley,” he said.

The Hoot costume would cost about $8,500 with a lifespan of four to five years, in comparison to Owlsley, which cost the university over $10,000 per complete suit, according to Mahler. FAU is looking for two students will be taking on the role of Hoot. Those students will get paid different amounts, depending on whether they’re selected as part-time or full-time. Part-timers will receive $2,500 per semester, while full-time students will receive $5,000 per semester.

FAU places a height limitation on being Owlsley, which limits the opportunity to only people who are 6 feet or slightly over, according to Hoot’s concept sheet that outlines his benefits and purpose. Hoot is gender-neutral, and students shorter than 6 feet can wear the suit — which FAU has two slots for.

“Only one person is Hoot at this time. We are looking to add one more Hoot for the 2020-21 academic year and have received approval from Student Government during our budget request process,” Mahler added.

Another one of Hoot’s jobs is to help with marketing and outreach to the A.D. Henderson School, the K-8 school on the Boca campus.

“The team was looking to grow, not only in membership but also in their reach across campus and the South Florida community,” Mahler said.

On the concept sheet, Hoot has smaller eyebrows and larger cheeks than Owlsley. The miniature Owl is designed to only wear a jersey and shorts, while being almost a foot shorter than Owlsley, standing at around five feet.

The addition of Hoot also allows for the coverage of more events, per the concept sheet. Mahler added that “Hoot and Owlsley will both be at home football games. For all other events and sporting contests, attendance by either or both will vary based on availability.”

“From a logistics perspective, having two mascots eases game day scheduling for both pre-game and on-field activities. It allows team members to rest more often and cover more ground,” he said.

Many schools around the country have two mascots, the concept page points out. One of the most notable duos is Albert and Alberta from the University of Florida. Albert was created in 1970 and Alberta joined him in 1986, according to the mascot’s website. A group of eight to 10 members play Albert or Alberta during the school semester, and they normally work anywhere from three to 15 hours a week.