This is FAU’s second C-USA title in the last three years. 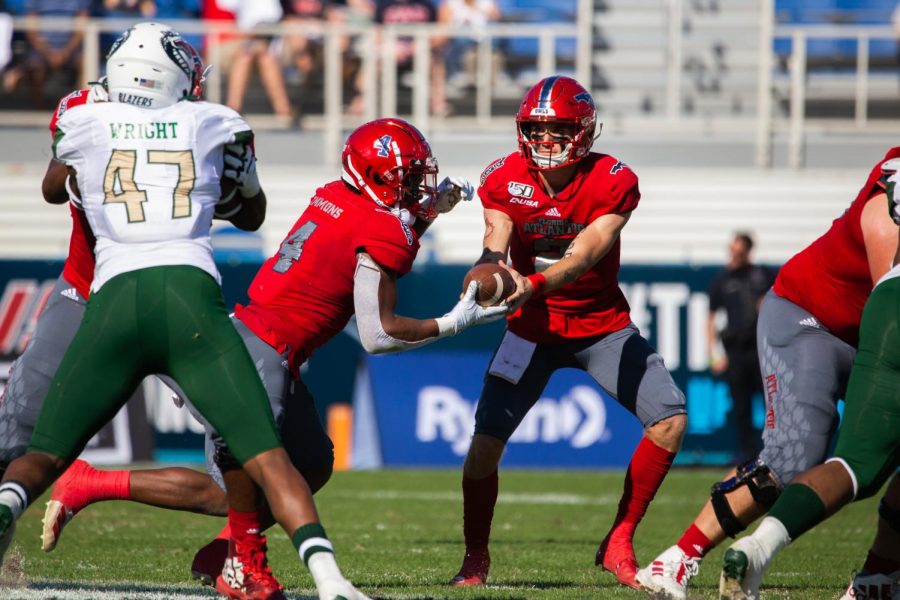 Quarterback Chris Robison was named Conference USA championship MVP as he threw for 267 yards to go along with four touchdown passes. Photo by: Alex Liscio.

The Owls blew out the defending Conference USA champions, the UAB Blazers, 49-6 in what is their second championship in three years.

With rumors floating around during game week about Lane Kiffin accepting the head coaching job at Ole Miss, a concern was if that would get in the way of Saturday’s game planning.

The Owls looked dominant in all facets throughout the whole game. The most surprising? The offense.

Why would FAU, the highest scoring offense in the conference coming into the game, have trouble?

UAB’s defense ranked top five in total defense in the nation, holding the opponent to 269.8 yards per game. The Owls managed to amass 585 yards in the game, 286 of those yards being through the ground game.

Teams that have faced the Blazers this season have had trouble running the ball against them, allowing opponents to rush for 92.3 yards per game.

However, running backs Malcolm Davidson and BJ Emmons were huge parts of the Owls success getting on the board early. Both totaling for 168 yards and two touchdowns, they kept the chains moving and found opportunities that the offensive line made for them.

An effective running attack led the way for Chris Robison to be productive, enough to earn him the C-USA championship MVP award. He threw for 267 yards, four touchdowns passes while also throwing an interception.

Coach Kiffin had a lot to say about Robison and his development over the last couple of years.

“It’s great, talking about a young kid who’s only a sophomore so his future is extremely bright here,” Kiffin said. “I wouldn’t be surprised if he was conference player of the year, it’s probably a toss up with Harry [Harrison Bryant], he did a great job of taking care of the ball and being a real quarterback.”

Robison involved all his pass catchers, most notably Deangelo Antoine and Harrison Bryant. A huge highlight was when Robison on the first play of the drive connected with Antoine on a slant route which he took the distance for a 75 yard score. On seven targets, he caught five balls for 112 yards.

Harrison Bryant made history Saturday eclipsing the 1,000 yard mark, which is only the third time ever a C-USA tight end. He had four catches for 39 yards and a touchdown.

“Coach Kiffin and Weiss put me in the position to succeed with the offensive scheme and Chris [Robison] throwing perfect balls all the time,” Bryant said, “It was a good feeling, but during the game they thought I didn’t hit 1,000 so I was ready to get back in but then they told me I did, so it was very cool.”

While the offense exploded for 49 points, the defense for the Owls shut down the Blazers making them virtually nonexistent.

FAU made UAB punt eight times, while also picking them off twice. The Owls led the nation in interceptions and they added two more in this game bringing their total to 21, breaking the program record. Meiko Dotson had another pick today who’s now at nine on the season, also leading the nation individually.

Linebacker Akileis Leroy, who recorded seven total tackles and one for a loss, was proud of they way the defense played, holding the Blazers to two field goals. He went back to the phrase that he harped on all season about the defense: mob mentality.

“Coach was emphasizing a lot about how aggressive we are on the field,” Leroy said. “As far as we watch film and our mindsets are, we know we can be a dominating force so we can give the offense the ball and let them do their thing.”

After the game in his post-game conference, Kiffin strayed away from any questions about his future and wanted to focus on the success of the Owls.

“Today is about this team, these players, these assistant coaches, these fans,” Kiffin said. “We’re looking at three years here of two conference championships, two double-digit win season. This a special team, I think these kids did a great job of avoiding distractions.”

He had high praise for the culture at FAU.

“You don’t win two conference championships because you hire a head coach, you have to have a lot of things in place and a lot of people helping you,” he said.

As Kiffin takes the next train to Oxford, Mississippi, he left the program with a bang, bringing them two conference titles and two 10 win seasons. Defensive coordinator Glenn Spencer will serve as the interim head coach for FAU’s bowl game.

Zachary Weinberger is the Sports Editor of the University Press. For information regarding this or other stories, email [email protected] or tweet him @ZachWeinberger.