This will be the fourth bowl game that FAU has played in. 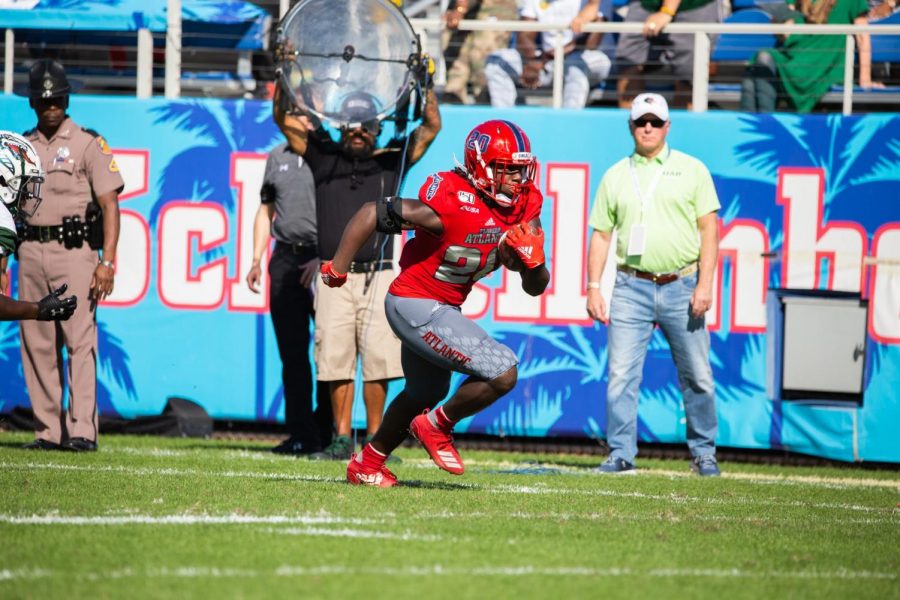 Running back Malcolm Davidson ran for 128 yards on 11 carries in the Conference USA championship game Saturday. Photo by: Alex Liscio.

FAU (10-3) will stay home in the final game of the year, as they accepted the invitation to play the Southern Methodist University Mustangs (10-2) in the Cheribundi Boca Raton Bowl on Dec. 21, announced Sunday.

The news came after the Owls blew out the UAB Blazers in the Conference USA championship on Saturday, 49-6.

The same day, it was also announced that Lane Kiffin is leaving to become the new head coach of Ole Miss, with Defensive Coordinator Glenn Spencer stepping in as the interim head coach.

“We’re thrilled to accept an invitation to the Cheribundi Boca Raton Bowl. We’re looking forward to what we know will be a great experience for our football team,” Director of Athletics Brian White said. “We’re also very excited to play one more game here in paradise in front of our fans. Plus, it’s great exposure for us with network television on ABC.”

The Cheribundi Boca Raton Bowl will be the Owls fourth bowl appearance, their second in Boca. Their first came in 2007 when they beat the Memphis Tigers, 44-27, in the New Orleans Bowl. A year later, they faced Central Michigan in the Motor City Bowl and won a close one, 24-21.

While both of those bowl wins were under former head coach Howard Schnellenberger, it was Lane Kiffin who brought the Owls back to bowl eligibility, nine years later. In the 2017 Cheribundi Boca Raton Bowl, FAU dominated Akron, 50-3.

SMU just enjoyed their first double-digit season since 1984, with their last bowl game in the 2017 DXL Frisco Bowl where they got outmatched by Louisiana Tech, 51-10.

The game will be broadcast on ABC at 3:30 p.m. at FAU Stadium as the Owls look to stay undefeated in bowl games.