FAU’s resident assistants are some of the best-paid RAs compared to other Florida universities. But some RAs say their compensation — $13 per hour for 20 hours a week — doesn’t actually cover the total time they work. 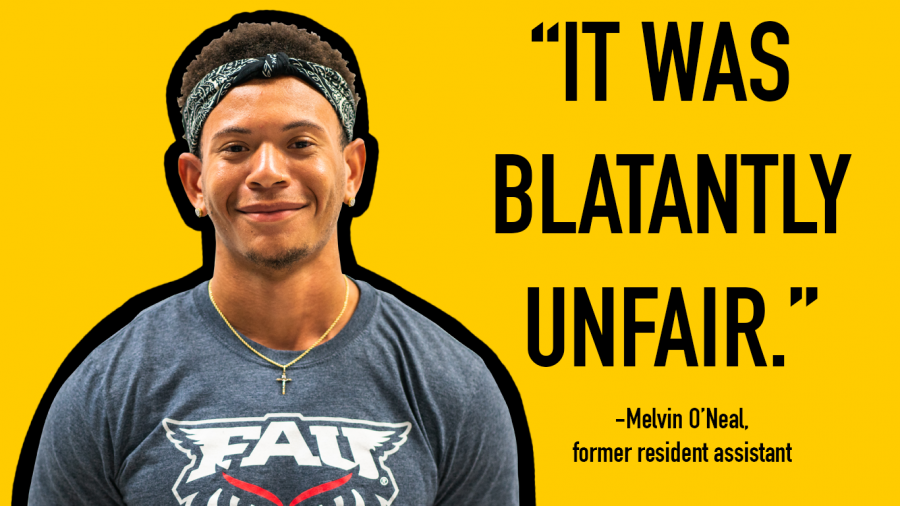 Resident assistants (RAs) at FAU are paid for 20 hours per week, but say they work many more than that, and their stipend doesn't reflect that. Melvin O'Neal, who worked as an RA at Fairfield Inn, said it was "blatantly unfair." Photo by Alex Liscio

Editor’s note: This story is part of our special issue on student-employee pay at FAU. To read our stories on graduate teaching assistants, orientation leaders and student-athletes, click here.

Melvin O’Neal was a resident assistant (RA) at FAU for three years. He worked in several buildings: Glades Park Towers, Heritage Park Towers, and Jupiter’s dorm. But during his semesters at the Fairfield Inn, a hotel where around 100 students live due to a shortage of on-campus dorms, he worked twice number of the shifts he did while working on campus — and still got paid the same.

The increase in shifts was sparked by the decrease of RAs at the Fairfield. There were only three working RAs at the hotel, including O’Neal, while on-campus buildings had up to 12. Even though he worked twice the shifts, which sometimes amounted to over 30 hours per week, he still got paid for 20 hours per week.

Resident assistants are the students who live and work on the floors of each residence building changing hall decorations, responding to noise complaints, and checking rooms for drugs and alcohol. The 86 RAs at FAU are some of the best-paid compared to other major Florida public colleges, but RAs say there are still several hours they work that are unaccounted for in their paychecks. A labor lawyer said that’s not illegal, but FAU could do a better job keeping track of how many hours RAs work.
How often do RAs really work?
It’s hard to quantify exactly how many hours RAs work. Since they live on campus, and their jobs are to supervise the residents they live with. They’re never truly off the job. If a resident knocks on their door at 4 a.m., they’re expected to answer and help solve the resident’s problem — whether it’s replacing a lost key or breaking up a big party.

But according to the Housing department, they’re paid for 20 hours a week. The stipend is based on $13 per hour, for 20 hours per week. The University Press obtained the most recent RA contract from a public records request. (The more detailed RA handbook is pending.) The contract states…

Official RA evening duty begins at 5 p.m. and continues until 8 a.m. (during the week) and 5 p.m. the following day (during the weekend). Additionally, RAs will be required to work their building front desk from 6 p.m. to 9 p.m. each night.

Those shifts may be called “on-duty” or “on-call” shifts. That means they’re not allowed to leave their building unless they’re called to help with an emergency in another residence hall — which is rarely the case.

But O’Neal and the other two RAs at Fairfield had to work up to four shifts per week since there was less staff and the same amount of hours to work.

Jacob Auerbach, a Boca-based labor lawyer, explained why Housing’s practice paying RAs for less hours than they’re on-call is OK: as long as RAs’ financial benefits combined — which include discounted housing — amount to at least the minimum wage, there’s no breach of Florida’s overtime laws. 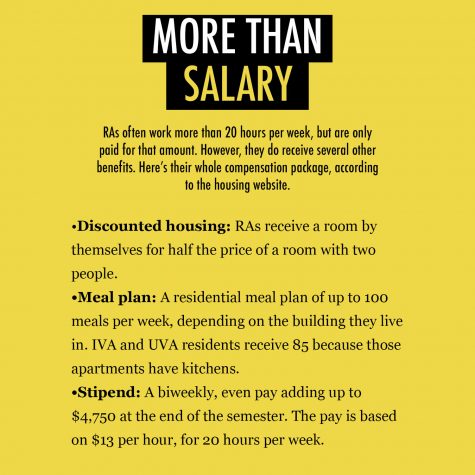 But since the hourly pay is distributed via even stipends rather than clocking in hours, the pay doesn’t reflect when you work under or over the 20 hours per week — which would’ve helped  To make sure that RAs aren’t reaching the 40-hour mark, which is that of a full-time employee, Auerbach thinks FAU should solidify a way to see how many hours RAs work.

“The safest approach is to have some sort of clocking in and clocking out system in place,” he said.
Paying attention to pay
Despite Auerbach’s suggested improvements, their current stipends are much more than those of other Florida public universities. University of South Florida resident assistants don’t even make money, according to their website.

One of the reasons why FAU RAs got paid so much was the Resident Assistant Council (RAC). The RAC acted as a union of sorts for RAs and consisted of around two people from each building. One of its members was a full-time staffer from the housing office, or “pro staff.” However, this was discontinued in Fall 2018 because of “change in departmental leadership,” said interim Vice President of Student Affairs Larry Faerman.

Jayde Cowan, a former RA and RAC member, said RAC was part of the reason RAs received a pay increase in the 2018 Fall semester. Their previous stipend was based on $10.50 per hour for 15 hours per week.

Cowan was an RA for three years and joined RAC during the tail-end of her run as an RA. Before she graduated, she said she launched a petition online to bring the RAC back and said it garnered about 100 signatures.

Cowan said she brought it to the upper echelons of the housing office, but never received acknowledgment. Interim Housing Director Catherine Kellman said that current housing staff was unaware of a petition, but hopes to bring RAC back by the end of the Fall semester.

“We want to provide a competitive compensation for two primary reasons,” Kellman said. “First, we know how demanding the position is on our students. Second, we want to provide opportunities for students who might otherwise have to work off campus, to remain engaged in the academic and social fabric of FAU.”

But the pay increase brought more responsibilities, Cowan said. She never worked at Fairfield, but she did work when Housing rolled out a new requirements: Owl Chats.

Owl Chats are biweekly check-ins RAs must have with residents to see if their mental health, finances and grades are in good standing. RAs can have up to 100 residents sometimes on their floor. When Cowan had to have Owl Chats with her 60 residents, she said it would take her hours to look for all of them.

“You have to spend one hour on each resident, and that’s if you can find the resident,” she said. “Some residents you can’t find at all …. so you have to track them down.”

O’Neal didn’t regret being an RA — he was satisfied with the benefits and enjoyed meeting new residents regardless of what building he was working in. And he knew he was going to break up late-night fights and confiscate drugs, but he still thinks he could’ve been paid more fairly for all the extra shifts.

“It would have been the right thing to do,” he said.

Kristen Grau is the managing editor of the University Press. For information regarding this or other stories, email [email protected] or tweet her @_kristengrau.