Opinion: Why we reported Tuesday’s death the way we did

Somebody died on campus yesterday. We found out everything we could and reported it. You might’ve disagreed with our headline and framing — but now, we want your feedback. 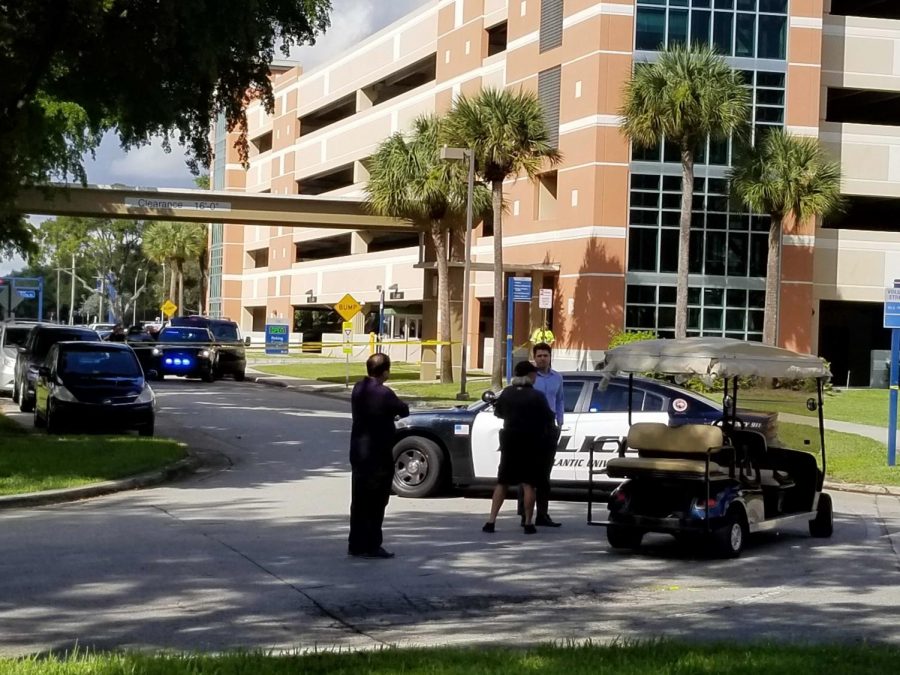 Police responding to the death on campus Tuesday morning. Photo by Kimberly Swan

Journalists have a fine line to walk when covering a suicide. Yesterday, we walked that line while reporting a breaking news story titled, “Death near parking garage causes blockage.”

It’s exactly what it sounds like: A student died near Garage 1, and police blocked off the surrounding area for three hours. We never mentioned the victim’s name — or even called it a suicide — because we don’t yet have that information.

But within minutes of posting the story, we received criticism that our story was impersonal and lacked empathy toward the victim. So our questions to you are: What headline would you have preferred to see? What additional information would you like to know?

But before you answer, we want to explain our reasoning for telling the story the way we did.

We followed the industry standard

The UP’s reporting follows guidelines set forth in the Associated Press Stylebook, an instruction manual of sorts which most professional journalists follow. Here’s their most recent entry on reporting on suicide:

“Generally, AP does not cover suicides or suicide attempts, unless the person involved is a well-known figure or the circumstances are particularly unusual or publicly disruptive. Suicide stories, when written, should not go into detail on methods used.”

If this was a suicide, which we haven’t confirmed from police reports, we followed our industry’s standard. (The reason we included the detail of a self-inflicted gunshot was to let people know there was a gun on campus.) This particular industry standard is impersonal by nature, but for good reason: When a suicide is publicly disruptive, people want to know when their roads will open again and how their day is impacted.

That approach was the best one to take in the moment.

Professional journalists do the same

At the scene, students began to speculate what happened, and why they’d been waiting for hours to get to their cars. For our staff, and under the circumstances, the best way to cover the story was to explain what happened, like a professional journalist would. And we did it the way other journalists do:

There were tough choices beyond the headline we had to make. We had a picture of the victim’s car which we unpublished because of privacy concerns. We didn’t explain what the crime scene looked like. We didn’t go into detail about the methods the victim used. We published contact information for counseling services on campus.

The story doesn’t end with one article

Right after we broke the news, we asked for the police report that will contain more details. And before we even published the article, we decided to write another story remembering the person’s life and their impact on campus, if the person was in the public eye on campus.

The reason we didn’t write a memorial article yesterday is because those types of stories take time. We know that because this isn’t the first time we’ve covered suicide. When Marjory Stoneman Douglas alumni and FAU student Sydney Aiello died by suicide earlier this year, we did two stories: a breaking news story with a brief summary of what happened and a longform story about her life and legacy that came out three months later.

But when students started to criticize how we covered the death, we wanted to be more transparent than just a tweet. As the student newspaper, we care about what students are upset about — especially if it’s us. We want you to hold us accountable and more importantly, give us feedback on the way we write things. We, of all people, know that words matter.

So yes, yesterday’s story glossed over the late student or faculty member’s life. But we want to hear from people who knew them personally so we can write an obituary remembering this person’s life. Please reach out to us at [email protected] so we can learn more about this person.

One last thing: We take mental health seriously. Our last print issue, which you can read here or pick up on stands, was dedicated to mental health. If you have thoughts of suicide, reach out to Counseling and Psychological Services or the National Suicide Prevention Lifeline at 1-800-273-8255.

Kristen Grau is the managing editor of the University Press. For information regarding this or other stories, email [email protected] or tweet her at @_kristengrau.

Cameren Boatner is the editor-in-chief of the University Press. For information regarding this or other stories, email [email protected]