The Owls scored 21 unanswered points in the second quarter, moving them closer to a Conference USA title berth. 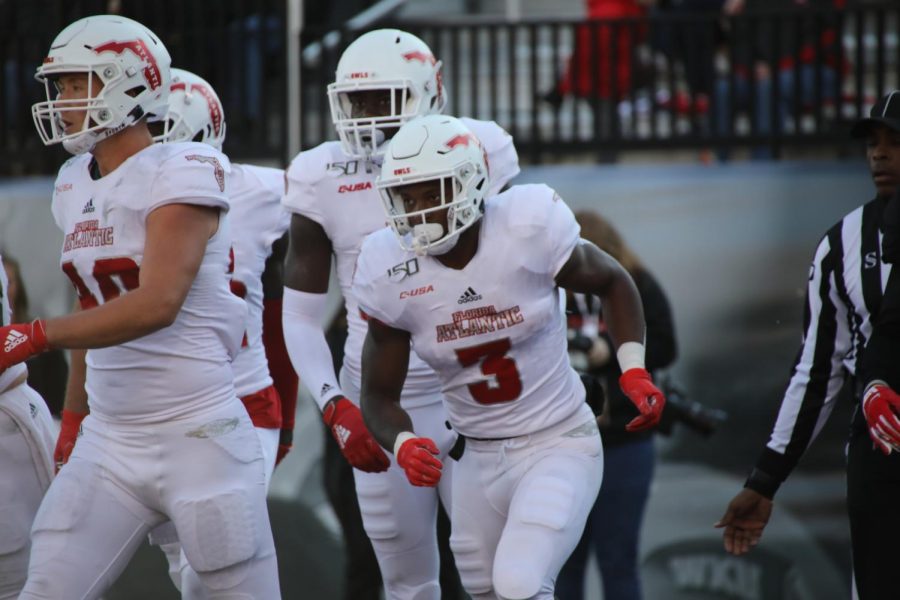 Freshman running back Larry McCammon III had one of two rushing touchdowns leading to the win against WKU. Photo courtesy of FAU Athletics.

Behind a huge second quarter that would see the Owls score 21 unanswered points, FAU outlasted the Western Kentucky Hilltoppers 35-24 yesterday in Bowling Green.

After Western Kentucky quarterback Ty Storey ran in a two yard touchdown, the Hilltoppers went up on the Florida Atlantic Owls 14-0 early in the first quarter.

The Owls had no life offensively, and the defense allowed a long touchdown pass earlier in the game. The Owls needed a spark, a momentum swing that would give them the edge in a hostile road environment.

On the opening drive of the second quarter, linebacker Akileis Leroy and defensive back Chris Tooley provided that spark. Leroy forced a Storey fumble on a sack, and Tooley scooped up the ball and ran 25 yards into the end zone.

This defensive touchdown was the shot in the arm that the Owls needed. The Owls rattled off 14 more points in that second quarter, and never looked back.

The passing game for the Owls began catching fire in the second quarter. Quarterback Chris Robison completed 18 of 29 passes for 208 yards, along with a pair of touchdowns.

The first of his two touchdowns would come on a nine yard grab by wideout Tavaris Harrison in that second quarter barrage. Robison then connected with receiver Willie Wright, who snuck past the defense to run 51 yards into the end zone untouched — his second touchdown of the season.

Despite missing injured running back Malcolm Davidson and only having -11 rushing yards in the first half, the Owls ground game rounded into form in the second half, and was essential in closing out the game.

In total, FAU finished with 189 rushing yards, James Charles and Chauncey Mason accounting for 125 of those yards. Larry McCammon, who missed last week’s game due to an injury, scored a touchdown on the ground as well, an 11 yard run in the second quarter.

The offensive line for the Owls was able to wear down the stout Hilltopper defense late in the game, opening up holes for the ball carriers who seemed to get stronger as the game progressed.

Defensively, it was important that the Owls continued their strong play headed into the game, and outside of a shaky first quarter, the Owls defensive speed and physicality overwhelmed the Hilltopper offense. The Owl defense held a solid WKU rushing attack to just 64 rushing yards. Akileis Leroy and Rashad Smith were all over the field, finishing with 12 and 10 total tackles, respectively.

The passing defense didn’t have the best game in terms of passing yards allowed, but the defensive backs made big plays when they counted. The group forced Storey into three interceptions, two of which were from defensive back James Pierre, and Zyon Gilbert added to his impressive season by intercepting Storey the third time to ice the game.

The Special Teams unit for the Owls also played well. Punter Matt Hayball added to his already impressive season by averaging 50 yards per punt, pinning Western Kentucky deep in their own territory multiple times. He also added a booming 77 yard punt to his resume.

Next Saturday, the Owls come back to Boca Raton for the always pivotal Shula Bowl against Florida International, a rivalry game that could have huge implications.