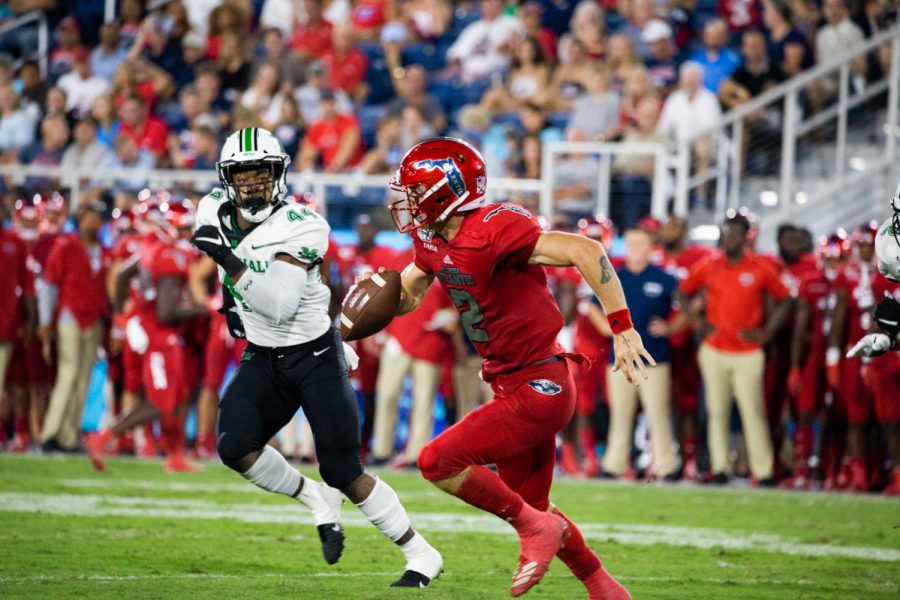 Quarterback Chris Robison completed 21 of 39 passes for 362 yards with no touchdowns and one interception in the loss against Marshall. Photo by: Alex Liscio.

In a hard-fought matchup, the FAU Owls have fallen for the first time in four weeks, as the Marshall Thundering Herd came out with a 36-31 victory.

Marshall opened up the scoring on their opening drive after settling for a 30 yard field goal after a 63-yard drive.

FAU then took the game over, scoring one-yard rushing touchdowns to go up 14-3, but that lead did not last long, as the momentum shifted in Marshall’s favor.

The Thundering Herd answered back in explosive fashion, including a 59 yard receiving touchdown from Marshall receiver Armani Levias to make the game 14-10 just 57 seconds later.

The Owls then marched back down the field with ten minutes to go in the third quarter with a 91-yard drive that was capped off with a one-yard rushing touchdown for Chris Robison that put FAU up 24-22.

DeAngelo Antoine made a big play of his own, making a spectacular catch at the two-yard line that set up a Malcolm Davidson touchdown that put the Owls up 31-30 with 3:34 left in the game.

Afterward, Marshall went on a 77-yard drive which resulted in a 17 yard Brenden Knox touchdown with 36 seconds left on the clock to make the score 36-31 following a failed two-point conversion attempt.

Chris Robison threw an interception on the following drive, as Steven Gilmore secured the 36-31 victory for Marshall.

Running back Brenden Knox stole the show for Marshall, racking up 220 yards on 23 carries, adding two touchdowns in what was an atrocious day for the FAU rush defense. In total, the Owls allowed Marshall to rack up 254 yards on the ground.

Chris Robison had a decent game, going 21-39 and adding 362 yards, no touchdowns and one interception.

One big problem, according to Head Coach Lane Kiffin was the team’s ineffectiveness on Run Pass Option plays.

“They’re called RPOs, not RPHOs. We can’t be holding the ball, we have to make a play” Kiffin said.

Chris Robison held himself accountable for said mistake, saying “on the safety, I blew a read on an RPO and held the ball, that’s a mistake I can’t be making.”

The Owls look to bounce back against Old Dominion on Saturday, October 26th in Norfolk, VA.