This comes after controversial calls during FAU’s loss to Marshall Friday night, 36-31. 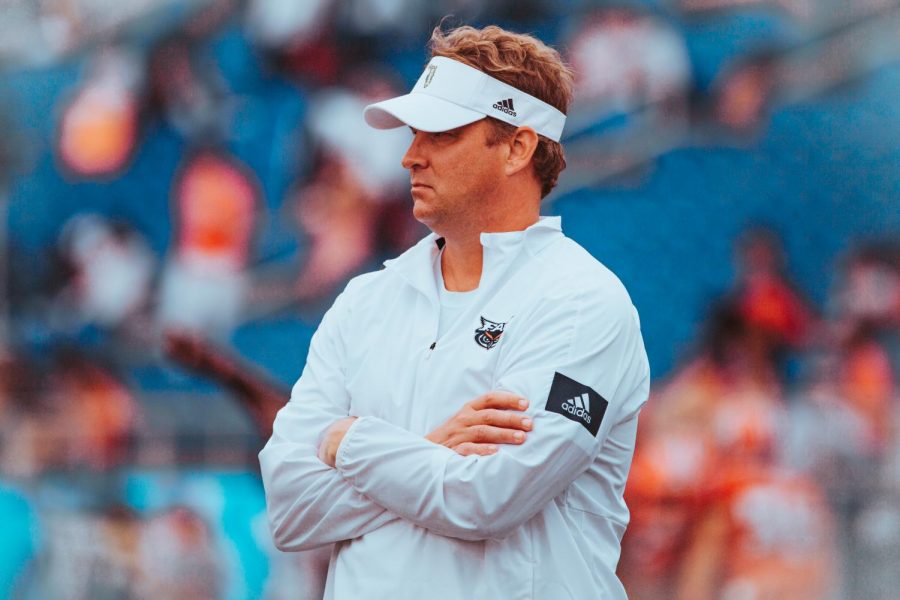 Head coach Lane Kiffin and the Owls come off of their third loss of the season against Marshall. Photo by: Alex Liscio

Head coach Lane Kiffin was fined $5,000 by Conference USA for “violating the league’s sportsmanship policy,” according to a C-USA statement, after tweeting a picture criticizing the referees Sunday night.

The image showed referees wearing glasses made for visual impairments supported by seeing-eye dogs on the field, implying they were blind. Kiffin tagged the official C-USA Twitter page.

“I sent what I thought was kind of a funny tweet,” Kiffin said during a Sunday evening press conference. “Guess they didn’t think it was as funny as I did.”

This comes after FAU lost to C-USA rival Marshall Friday night, 36-31, dropping the Owls to 4-3 on the season.

After the loss, Kiffin said in his post-game press conference that he wasn’t going to get so wrapped up about the officiating.

“I already made the decision I’m not going to get into officiating,” Kiffin responded Friday.

Kiffin criticized multiple controversial calls by the referees, most notably pass interference calls that went in Marshall’s favor that FAU didn’t seem to receive. The Owls were penalized nine times for 90 yards.

One play in the first quarter Kiffin questioned was when receiver John Mitchell was hit by a Marshall defender while Chris Robison’s pass was still in the air. No flag was thrown on the play.

Another incident of controversy involving the referees was a penalty that was handled on Marshall’s game-winning drive. An unsportsmanlike flag was thrown on offensive linemen Josh Ball during a 30-yard gain from Brenden Knox.

Instead of negating the penalty which would have pushed the Herd back, the official called it a dead ball foul, which led to Marshall scoring the go-ahead touchdown.

Besides the fine, the conference publicly reprimanded Kiffin.

“Conference USA has specific rules and standards regarding sportsmanship which have been adopted by our membership,” commissioner of C-USA Judy MacLeod said in a statement. “We have an obligation to enforce our rules, including the prohibition of public criticism of officiating.”

Kiffin also said that he spoke to the conference directly about his stance on the officiating Friday.

“They’re in agreement with me that the officiating was definitely not on point during the game,” Kiffin said. He added that the conference officials he spoke to said there were “some inaccuracies.”

The tweet is still online as of publication time.

The Owls next game is set for this Saturday as they travel to Norfolk, Virginia to take on Old Dominion.