With the esports arena coming next year, new opportunities are opening up for FAU’s esports club. 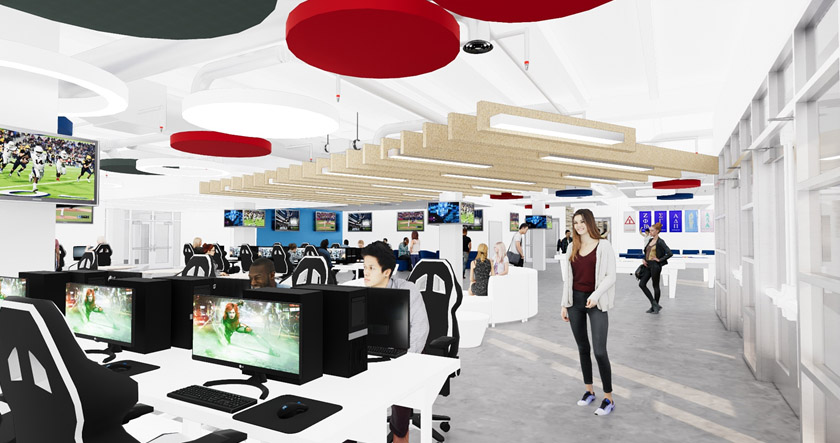 Rendering of esports arena in the Student Union, image courtesy of FAU.

This semester, FAU is constructing a gaming arena in the Student Union, open to all students, faculty, and staff. And while they may not be considered “student-athletes,” the FAU eSports Club and its nearly 200 members and enthusiasts will have a space dedicated to the growing online sport.

The arena will make FAU the first public university in the state to have a competitive gaming center and official competing teams. It will include 40 to 45 gaming stations, console areas, and wall monitors with an estimated completion date sometime in 2020, according to the Student Union website.

The Student Union has always been a space where students can play video games and meet people. But as esports has grown, FAU decided that it was time to give these students a space of their own.

While eSports club member Petar Pejc is sad about the closure of The Burrow (he said it had “really good food”) he’s eager for the new arena to open and to start playing competitively.

“We’re not just a bunch of nerds sitting in a room,” he said. “Esports is just as competitive as soccer or football.”

You don’t have to be competitive to join. However, with the club’s Super Smash Brothers Ultimate, Rocket League, and League of Legends teams announced in late September, the teams will be participating in different events with scholarships as prizes.

Freshman Christian Marquez, a new member of the club, said, “I’m surprised, that one, it has so many people that are in it, and two, that it is so welcoming to everyone.”

FAU esports club president Julie Tomanio said with all the connections she’s made through gaming, she’s excited to see how people interact together and use the technology to further their skills since the club opened its doors for new members earlier this year.

“I’ve made so many new friends and met fantastic people. At FAU, I’ve created a community of people who can not only gain friends but gaming partners. It’s more fun to play [in groups] as opposed to solo.”

Alongside the new esports arena, there will be some new editions that are projected to be completed by 2020. These additions are as follows:

Grand Palm will be remodeled into four separate meeting spaces

This construction started in October 2017 and has been behind, according to the “The New U” site. The first phase was to be completed by Aug. 15, and the second on Sept. 15.

Marcy Wilder is a contributing writer with the University Press. For information regarding this or other stories, email [email protected].