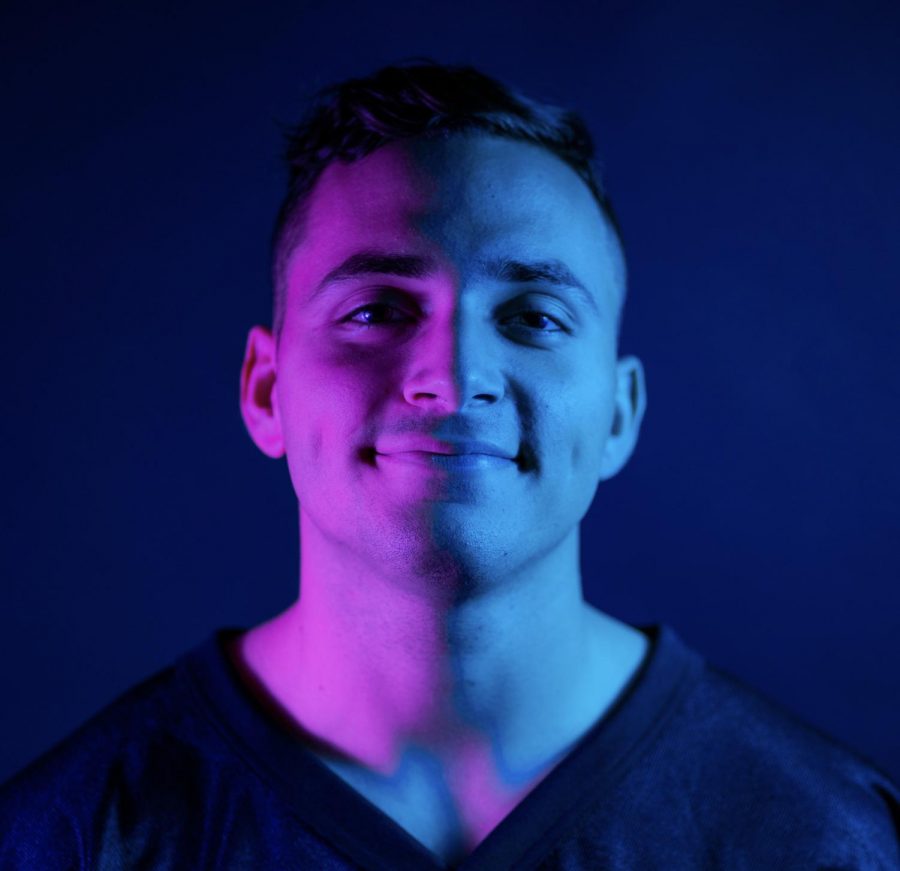 Sebastian Riella. Riella is a football player who spoke up about mental health on Twitter, which spurred Athletics to launch different mental health awareness programs. Photo by Alex Liscio

It was the day before FAU punter Sebastian Riella’s last game during his senior year of high school.

He was in class, when all of a sudden he felt as if his vision was sinking into his head. He said his body had lost control of itself and all he could hear was his heart beat racing throughout his whole body.

His first thought was that he was having a heart attack. But after his mom rushed him to the hospital, he was diagnosed with two mental illnesses: anxiety and derealization disorder, or recurring out-of-body sensations.

“I felt as if I was watching my life unfold through a movie, like I was standing behind a glass and watching every little thing I did. I remember looking at my hands and feeling as if I wasn’t real. I thought I was alone. Days with this turned into months of a constant battle of what to me seemed like I was in a dream and I was just waiting to wake up,” Riella said.

College teams need to start implementing mental health classes into their programs. Lot of guys come from messed up backgrounds and don’t know how to cope with certain things. Not only will it help now, but in the future. Just a thought.

Riella wanted to voice his opinion because of the stress that school and football season brings.

“I knew I wasn’t the only one going through that. I know what it’s like with teammates and having people around,” he told the University Press.

He admits he didn’t think anyone would notice the tweet. But it caught the attention of Jessica Poole, a spokesperson for FAU Athletics.

This is a great suggestion @SebastianRiella Please let us know how @FAUAthletics can help you be the very best on and off the field!

The next month, FAU Athletics announced at a back to school event for student athletes that they will start having mental health seminars once a month to support students. Guest speakers and psychologists will talk to athletes about ways to cope with stress, how to alleviate the pressure that comes with being a student-athlete, and other mental health-related topics.

Riella said he suspects his tweet may have had some influence on the decision, since he met with Poole after that to discuss some future mental health ideas.

Poole said that each year the Student-Athlete Advisory Committee (SAAC), a group of two student-athletes from each team and acts as a liaison between the teams and Athletics administration, comes up with goals each year. This year, mental health awareness is one of their primary goals. One initiative that’s still in its planning stages is the idea of “green games,” where the football team encourages fans to wear green in solidarity for this with mental illness.

Riella feels there’s a stigma attached to speaking out about mental or personal problems. “It’s perceived as a sign that an athlete was weak or unfit to play”, he said. But he believes that stigma is slowly going away.

“The stigma surrounding athletes is changing with how vocal athletes are being [with] just about everything — not just mental health, but with their beliefs. I feel like social media has opened up a realm in a way that we didn’t have before to speak our minds,” he said.

Riella noted that there is more of a burden put on college athletes in comparison to regular students. Because of this, he said, mental health should be prioritized.

“They say you’re a student athlete but in reality they always see you as an athlete, they don’t see you as a person. They just see you as what you’re seen as on social media or on TV,” he said.

He meets with Dr. Raphi Wald, the football team’s designated psychologist, when he feels his stress levels are high.

“I’ve been talking to [Wald] every weekend. He’s amazing. He’s really helped me just calm the nerves of everything that’s going on around you because we live in a chaotic world and it’s easy to implode,” he said.

Football players can see Wald by appointment and simply tell their trainer what’s going on and they are free to meet with Wald.

“Between conditioning, practice, travel, study hall, games, treatment, and team meetings, they barely have a moment to breathe. This creates an opportunity for a lot more stress, anxiety, and other psychological problems to arise,” said Wald.

He sees about 25 athletes a week. Some just for quick 15-minute check ins and other full sessions which last 45 to 50 minutes. He also has  informal conversations with student athletes and coaches and talk to teams in small groups.

Wald believes that FAU has done a great job acknowledging the need for mental health services for student athletes but believes more can be done.

“As a psychologist with a bias toward mental health, I always believe there is more that can be done at any institution. As time goes on and there is less and less of a stigma attached to mental health problems, more and more people seek help rather than suffering quietly,” Wald said.

Over 40 million adults in the U.S., or 19.1 percent, have an anxiety disorder which leads to panic attacks, according to the National Institute of Mental Health. Up to 75 percent of people in the U.S. experience at least one derealization episode in their lives — like Riella did his senior year — meaning they persistently or repeatedly have the feeling that they are observing themselves from outside their body or have a sense that things around them aren’t real, according to the National Alliance of Mental Illness (NAMI).

“The best thing that my therapist has told me is that although you may feel like you may have a certain illness or like you’re dying, you know that you’re not. You know that you’ve gone through these same symptoms and that nothing has happened so just know, at the end of the day, you will be okay,” Riella said.

Top athletes in all sports have spoken up about ways to help and destigmatize mental health. In 2016, Michael Phelps opened up about his battle with depression to Sports Illustrated. And in August, Andrew Luck, a quarterback for the Indianapolis Colts, retired from the NFL because he felt “mentally worn down,” according to ESPN.

Riella’s days are busy, with practice beginning at 6 a.m. and ending at noon, but the next few hours are filled with classes, meetings with professors, studying, and homework.

This leaves little time for him to focus on himself, but Riella still tries to find a way to detach himself from his stress.

Kennedy McKinney is a contributing writer with the University Press. For information regarding this or other stories email [email protected].