The Owls get ready to start the second half of their season on a three-game winning streak. 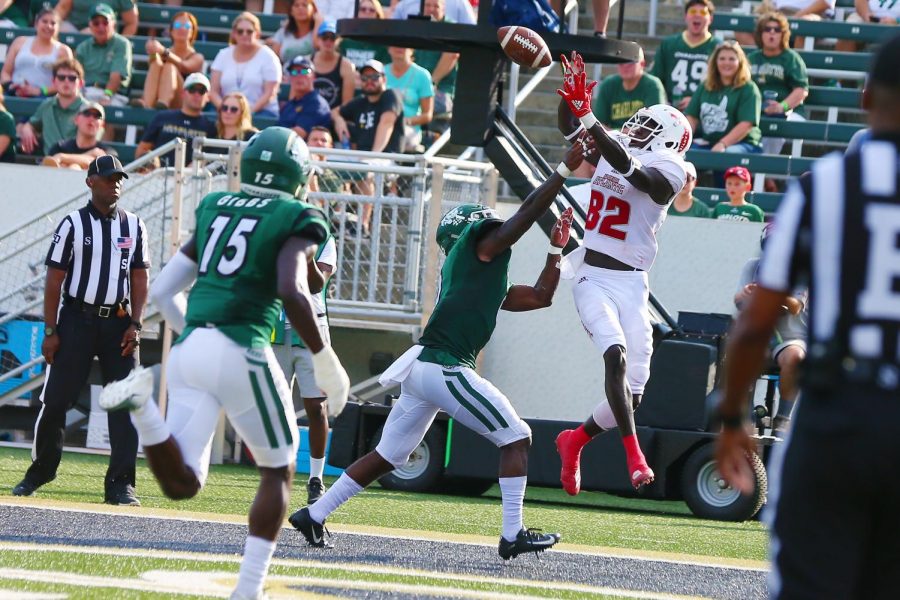 As FAU prepares for action after the bye, the recievers need to stay consistent, especially Tavaris Harrison who recorded a touchdown against Charlotte. Photo courtesy of FAU Athletics.

The Owls look to begin the second half of their season riding a three-game winning streak and carrying an undefeated record in conference play.

Here are five takeaways from the first half of the season:

1. Chris Robison is the offensive MVP though the first five games.

Robison has played lights out to start the season. Through the first five games he’s already matched his total of touchdown passes from last season, 12, and has only thrown two interceptions.

The Owls will need Robison to continue his steady play if they are going to have a successful season. Robison has more playmakers to get the ball to this season and if he continues to limit the turnovers, the offense can score on anyone.

2. The receivers have been a difference maker for the offense.

There were a lot of questions heading into the season about the Owls receiving unit. Other than tight end Harrison Bryant, there weren’t a lot of players who you could count on to make a big catch when necessary.

Through the first five games, we’ve seen the receiving group provide big plays for this offense. Wide receivers John Mitchell and Deangelo Antoine have both had record breaking days this season. Antoine and tight end John Raine lead the team in receiving touchdowns with four each.

Bryant is leading the team in receptions and receiving yards with 21 receptions for 345 yards. 11 different Owls have at least one reception on the season.

3. Rashad Smith is the defensive MVP through the first five games.

The Owls linebackers have been the strength of the defense and the leader of that group has been Smith. During the first five games of the season, Smith has racked up 36 tackles, 4 tackles for loss, 3 fumble recoveries, 1.5 sacks and 1 interception.

Smith’s 36 tackles and 4 takeaways are both team leaders in each statistic. If Smith can keep up his solid play, there’s no reason he won’t be first or second team all C-USA.

4. The defense has done a better job of limiting big plays.

Against Ohio State and UCF, the Owls defense surrendered a lot of big plays to the opposing offenses. During their three-game winning streak the defense has done much better slowing down the opposition and limiting their big plays.

Since those first two games, the Owls are allowing an average of 21.7 points per game. The defense also has 12 sacks, 5 interceptions and 5 fumble recoveries during their first five games of the season.

If the Owls defense of the past three games continues to show up, they will be one of the better defenses in C-USA and will take pressure off of Robison and the offense.

5. The Owls are on track to make their 2nd bowl game in three years.

The FAU owls are already halfway to bowl eligibility and their toughest remaining conference games are all at home.

They’ll face Middle Tennessee, Marshall, FIU and Southern Miss, all in the friendly confines of FAU Stadium. Since taking over for the Owls in 2017, head coach Lane Kiffin has a 12-4 record at home (7-2 C-USA).

Western Kentucky will be the most difficult remaining road test for the Owls. The Hilltoppers are 3-0 in C-USA play with wins over defending C-USA Champion UAB, FIU, and Old Dominion.

If the Owls can take care of business at home, there is no reason they shouldn’t be playing in their fourth bowl game in program history.

FAU will kickoff the second half of their season against Middle Tennessee at 4:00 p.m. Oct. 12th at FAU Stadium. The game will be broadcast on the streaming service ESPN+.