The Owls rebound off of a Homecoming loss with a landslide victory. 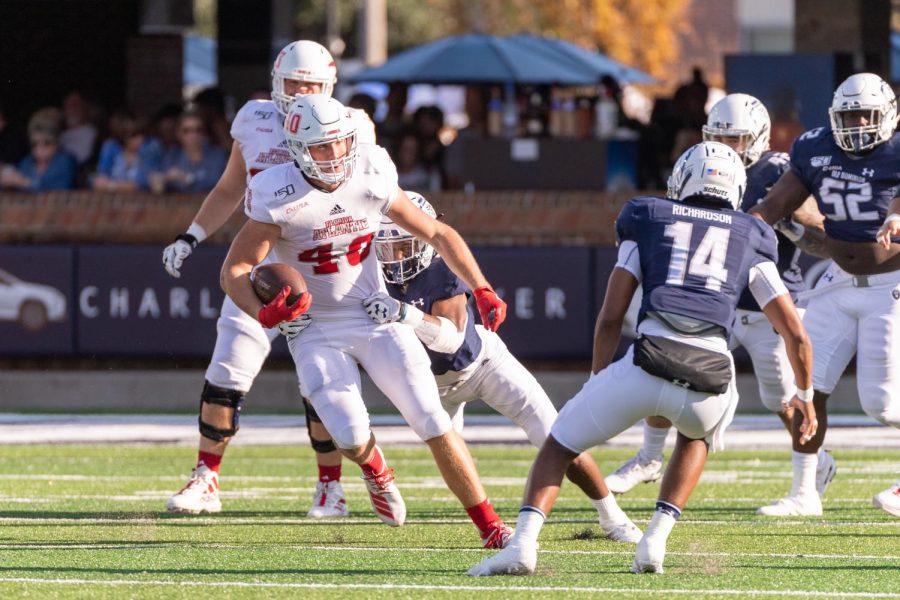 TE Harrison Bryant had a huge game catching eight passes for 92 yards and a touchdown, his first of the year. Photo courtesy of FAU Athletics.

The FAU Owls went to Norfolk, Virginia looking to rebound from a loss to Marshall on Homecoming — and rebound they did.The Owls took care of business on the road, against a then 1-6 Old Dominion Monarchs team that, despite their record, played a lot of teams close.

The Owls dominated all three facets of the game en route to a 41-3 victory over the Monarchs. The offense started out fast, scoring on three of their first four drives. QB Chris Robison threw for 208 yards and a pair of touchdowns on his birthday before leaving the game before the third quarter. The first touchdown going to TE John Raine for his fifth touchdown on the year, and the second going to Harrison Bryant for his first touchdown grab of the season.

The ground game was potent as well, despite RB Larry McCammon not making the trip. Eight Owls got at least one carry, and the group totaled 159 yards on the ground. DeAngelo Antoine had another exciting play, as he took a reverse 48 yards to the endzone. Malcolm Davidson also added a short TD run. WR Willie Wright also got into the endzone for the first time this season, on a 22 yard pass from QB Nick Tronti.

The Owls defense was just as dominant, allowing only 204 total yards on the game, and a mere 70 yards rushing. ODU QB Messiah DeWeaver was flustered by a hoard of Owls all game, as the defense tallied six sacks, led by defensive end Leighton McCarthy, who had two of his own. Linebackers Rashad Smith and Akileis Leroy both continued their stellar seasons, combining for 13 tackles and two sacks. This pressure contributed to the Monarchs lack of a rushing offense, and led to a Caliph Brice interception late in the game.

The Owls Special Teams unit was also stellar Saturday afternoon. Kicker Vladimir Rivas was a perfect two for two on field goals, and five for five on his extra points. Punter Matt Hayball also continued on a great season by averaging 47 yards per punt.

Despite the win, there was a significant cost. The injuries started to pile up for Florida Atlantic. Chris Robsion left the game and did not return after halftime with a left shoulder injury. RB Malcolm Davidson also did not return after an undisclosed injury sustained. An additional three Owls were dinged up during the game as well.

These injuries, along with McCammon being out, could impact the rest of the season, especially next week as the Owls go to Western Kentucky for another pivotal game in Conference USA.

The victory puts them one win away from bowl eligibility.