Quarterback Chris Robison ties FAU record for most passing touchdowns in a game with the help of WR Deangelo Antoine. 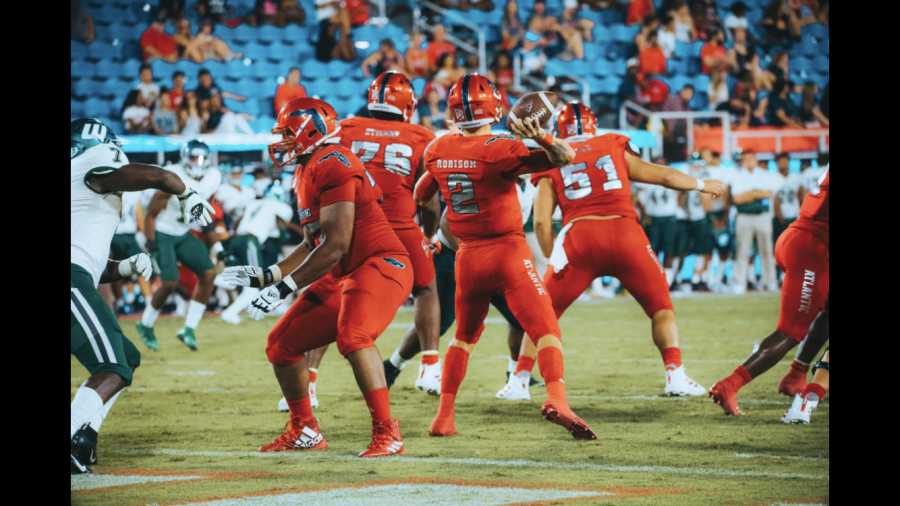 Chris Robison was sharp Saturday night as he threw for 379 yards and five touchdowns. Photo by: Alex Liscio.

The FAU Owls notched their second victory of the season Saturday night in a 42-7 rout of the Wagner Seahawks after tremendous individual performances from QB Chris Robison and breakout WR Deangelo “Delo” Antoine.

In a game that appeared to be all but over by halftime, the Owls made seemingly easy work of a completely overmatched opponent. The FAU offense scored early and often while the defense held the Seahawks to -6 yards rushing and allowed only one touchdown.

Robison, a redshirt sophomore, completed 25 out of 36 passes for 379 yards and tossed five touchdowns, a feat he hadn’t accomplished since high school. This tied him with FAU legend Rusty Smith for the most passing touchdowns in a game in school history.

Deangelo Antoine caught four of those touchdowns and made 11 total receptions for 173 yards.

Two of Antoine’s scores came via screen passes, including a 28-yarder that saw him traverse the entire width of the field behind the line of scrimmage, only to double back to the other side of the field again and take it the final 28 yards to the house. The fourth TD came on a 57-yard strike from Robison late in the third quarter, which made the score 35-7 and put the game out of reach.

“I just wanted to make the best of the opportunity,” Antoine said after the game. “This is my last year, so every game I just want to go out there and play hard. I don’t want the feeling that says ‘Man, I wish I could’ve played harder that game,’ so I just leave no doubt.”

Entering the game, Antoine, who transferred from University of South Florida in July, had recorded just 3 receptions for 16 yards this season. He now holds the FAU record for the most receiving touchdowns in a game with four.

On the other side of the ball, FAU played swarming defense, led by Rashad Smith who made 10 total tackles and an interception, and Akileis Leroy who had 2.5 tackles for loss. Except for one drive, the Owls thwarted the Wagner attack headed by QB Christian Alexander-Stevens, the player who transferred from Florida International University after leading the Panthers to victory in the Bahamas Bowl last season.

Alexander-Stevens was harassed all evening and managed only 218 yards on 22 for 38 passing. He connected with WR Joshua DeCambre for the Seahawks’ lone score late in the first half. DeCambre hauled in eight passes for 124 yds and was the only bright spot for Wagner during a dark evening in South Florida.

Still, it wasn’t a perfect game for FAU by any stretch. The Owls racked up 12 penalties for 95 yards, with the majority being called against the offense. Keeping penalties to a minimum is always a point of emphasis from head coach Lane Kiffin.

“We addressed it at half and in the locker room after the game,” he said. “Most of them were offensive line penalties, and then we had some defensive penalties that kept some drives alive…After watching [the game] again I’ll probably be disappointed in the offensive line play.”

Robison too, after a night in which he threw for the second-highest passing yards total in his college career, was unsatisfied.

“Even tonight we missed a lot, I missed eleven passes, a lot of those I should have hit,” he said. “We still left a lot out on the field and I think we should have way more than 42 points against this opponent.”

Next week FAU football looks to make it three wins in a row as they travel to Charlotte for a pivotal Conference USA matchup against the 49ers.

John DeStefano is a contributing writer for the University Press. For information regarding this or other stories, email [email protected].