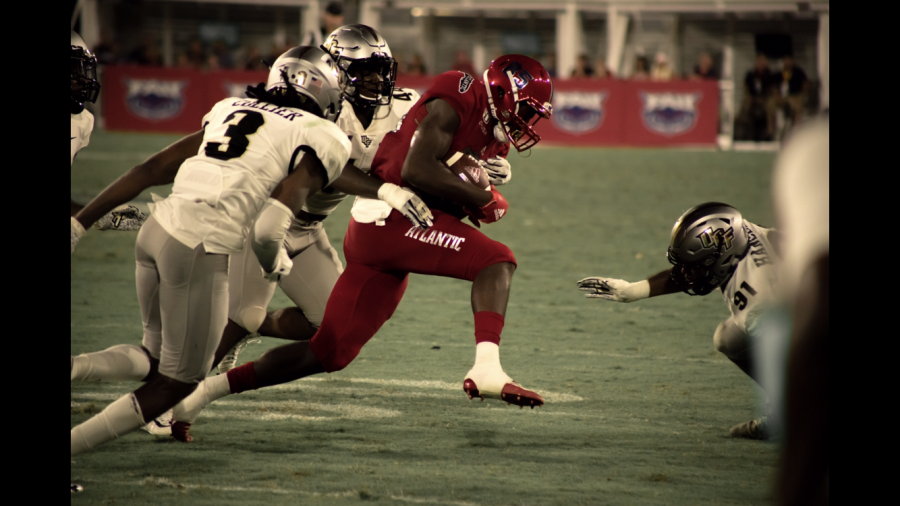 Senior wide reciever John Mitchell wasn't too involved in the passing game as he only caught two passes for 15 yards. Photo by: Michael Hoyos

In the home opener for FAU yesterday, the No. 18 UCF Knights defeated the Owls 48-14 in Boca Raton.

While the Owls start the season 0-2, they are the only team in the country whose first two games were against ranked teams.

The Owls looked impressive in the final three quarters of last week’s game against No. 5 Ohio State, where the Owls were outscored 21-17. Because of that, UCF was on high upset alert going into the game, despite not losing a regular season contest since November 2016.

Saturday was “an embarrassing performance by us in a big game for a lot of people,” head coach Lane Kiffin said. “If you play bad early against these guys, they pull you out of the game.”

The offense just couldn’t find an answer Saturday as they failed to score a touchdown until the fourth quarter. While starting quarterback Chris Robison had a forgetful performance — only completing 45 percent of his passes for 177 yards and an interception — he was under pressure by the UCF defensive front seven too early and too often to make his progressions.

Kiffin mentioned in the post-game press conference the offensive line has been a concern for him since the first day of camp, and hopes they can improve going into week three.

Robison said he had room to improve from his performance in the home opener.

“I think throughout every single week, I can definitely get better,” Robison said. “I can specifically say what it is, but at this point it’s just to get better for my teammates.”

After BJ Emmons suffered a broken ankle last Saturday, Larry McCammon II and Malcom Davidson took the most carries with 18 and eight, respectively. McCammon racked up 48 yards to go along with a touchdown.

While the scoreboard says differently, the defense for the Owls gave opportunities to the offense to score some points during the first half. But when you’re facing a top team in the country like UCF, you need to start fast and never stop. Unfortunately, FAU was stagnant.

The defense imploded in the second half, giving up big play after another. With the final score so high, you would think UCF starting quarterback Dillion Gabriel played tremendously, but he only completed seven passes for 245 yards and two touchdowns.

Most of the damage came on the ground, where UCF running backs totaled 312 yards for five touchdowns. This should be a key area of concern for FAU defensive coordinator Glenn Spencer as the season goes along. They need the defensive front seven to shut down Conference-USA backs and set the edge.

One of the only bright spots on defense was middle linebacker Akileis Leroy who totaled eight tackles, two of them for a loss, and recorded the only sack of the game.

FAU looks for their first win as they travel to Muncie, Indiana on September 14 to take on the Ball State Cardinals.