With the season approaching, we take a look at the trenches, which returns four starters on offense, and two on defense. 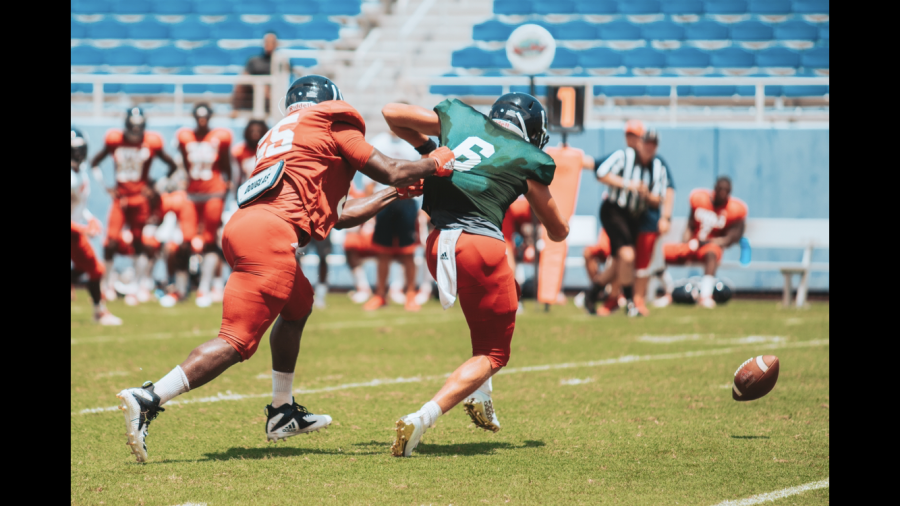 Defensive end Damian Horton is just one of many defensive lineman on the FAU roster. Photo by: Alex Liscio

If the trenches win football games, like new defensive coordinator Glenn Spencer believes, than the experience that the Florida Atlantic Owls have on both lines will play a critical part during the season.

“It’s the toughest guys on the team,” Glenn Spencer told reporters earlier this fall. “I told them that at the first meeting. I separated them from the room and said, ‘look, it’s all on you guys.’”

On the offensive side of the trenches, the Owls return a majority of an offensive line that was partly responsible for Devin Singletary’s success in both 2017 and 2018, where Singletary ran wild for 3,266 rushing yards and 25 touchdowns.

As a unit, the offensive line brings back four starters, with left tackle Reggie Bain the one departure.

Replacing Bain is senior Brandon Walton, who shifts from the right side to the left. Last season, Walton was named to Phil Steele’s C-USA Third Team, and was one of the most important parts of the Owls’ offensive line.

Filling the empty spot in the starting lineup is offensive guard Nick Weber, who was placed on scholarship during fall camp. Weber has just one start in his college career when he filled in for BJ Etienne in the Owls’ loss to Charlotte last season.

Center Junior Diaz may hold the key to the unit’s success. Diaz is in his second year with FAU, transferring from Tulane before last season. In the offseason, Diaz was named to the 2019 C-USA Preseason Fourth Team by Athlon Sports.

On the defensive side of the trenches, the introduction of Glenn Spencer as defensive coordinator means the Owls will likely see more nickel defenses, which will introduce more defensive backs on the field.

Unlike the offensive line, the defensive line loses two starters from last season, including Hunter Snyder, who finished 2018 with 3.5 tackles for loss and was named to the Ted Hendricks watch list, which awards the best defensive end in the nation. The Owls also lost defensive tackle Steven Leggett, who finished his senior season with 19 total tackles, and two for loss.

Sixth-year senior Ray Ellis III had a strong camp and may have played himself into a starting spot to begin the season. Ellis battled injuries for a lot of his career, but was able to play in all 12 games last season. Ellis finished last season with 19 total tackles and a career-high in tackles for loss (1.5).

Look for defensive end Tim Bonner to take the next step for the Owls. The senior defensive end is best known for his appearance on the Netflix show Last Chance U when he was a member of East Mississippi. During his two seasons at FAU, Bonner has four sacks, including three last season. Bonner will likely get the start against Ohio State to begin the season.

The Owls have also introduced a hybrid linebacker and defensive end role, which is referred to as the “LEO.” The LEO role relies on an athletic player, who can both pass rush, and drop back into coverage. During the spring and fall, Leighton McCarthy and David Belvin III have primarily played that role.

Kevin Fielder is a contributing writer for the University Press. For information regarding this or other stories, email [email protected] or tweet him @TheKevinFielder