Position Preview: A look at the secondary and special teams as the season approaches.

James Pierre will lead the Owls Secondary this season, as FAU looks to bounce back this season. 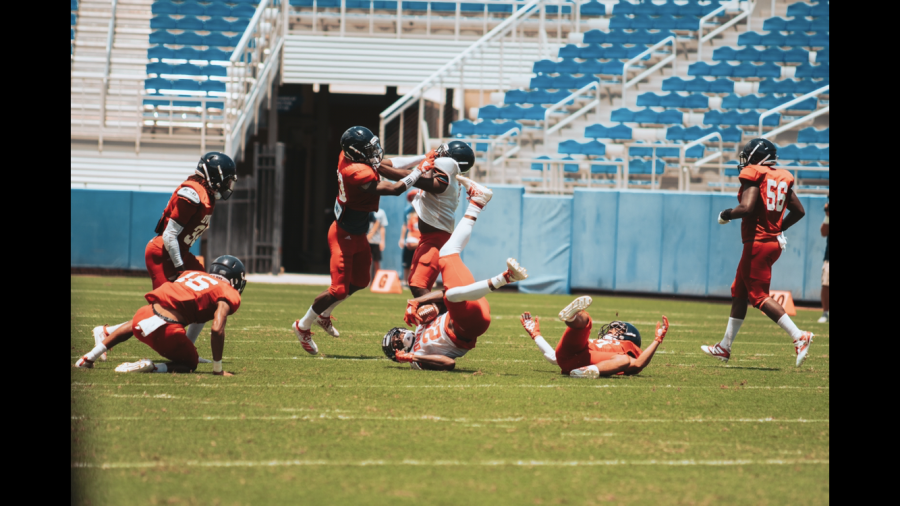 The defensive backs's goal is to be all over the field and disrupt anybody on the opposing side. Photo by: Alex Liscio

Going into this season, the secondary will likely be one of the most looked at positions for the FAU Owls, and they will definitely be tested by Justin Fields and the Ohio State Buckeyes in their season opener.

Junior Cornerback James Pierre headlines that group, as he looks to improve off of his Sophomore season, which saw his tackle numbers rise from 21 to 55, although going the entire season without any interceptions.

Senior Chris Tooley will likely line up on the other side of Pierre, where he looks to bounce back after a slightly disappointing 2018 season which saw his numbers drop from previous years, with his interception numbers falling from 4 to 1 and his tackle numbers taking a hit as well.

As for the safeties, Da’Von Brown and Zyon Gilbert round out the starting defensive back unit for FAU, with Gilbert looking to build off of a solid 2018 campaign that saw him total 51 tackles.

Brown, on the other hand, is looking to have a breakout 2019 campaign, as he builds off of the 36 tackles and 3 pass deflections he had in the year prior.

All-in-all, this starting unit could be a problem for opposing teams if it sticks to the “mob” mentality they’ve established over the offseason, as they look to win their second C-USA title in three years.

The special teams unit comes back improved as well, as kicker Vladimir Rivas comes back with more confidence than he had in his disastrous freshman season where he missed six field goals in his last six games, including two that helped decide two three-point games against Middle Tennessee and Charlotte that cost FAU a shot at a bowl game last season.

The punting situation, on the other hand, seems a bit rocky with sophomore Sebastian Riella battling injury. His replacement, for the time being, will be potential starting quarterback Chris Robison, who has punted in the past.

Anyone who watched at least one FAU football game last year could tell how horrid that punting unit was, and it isn’t looking much better now with Robison potentially serving as the punter, but Redshirt Freshman Aaron Shahriari could challenge him for the job.

As for returners, BJ Emmons and Dante Cousart will serve as the kick and punt returners respectively, filling the void that Kerrith Whyte Jr left.