All university events are cancelled from 1 p.m. on Saturday, Aug. 31, through Wednesday, Sept. 4. 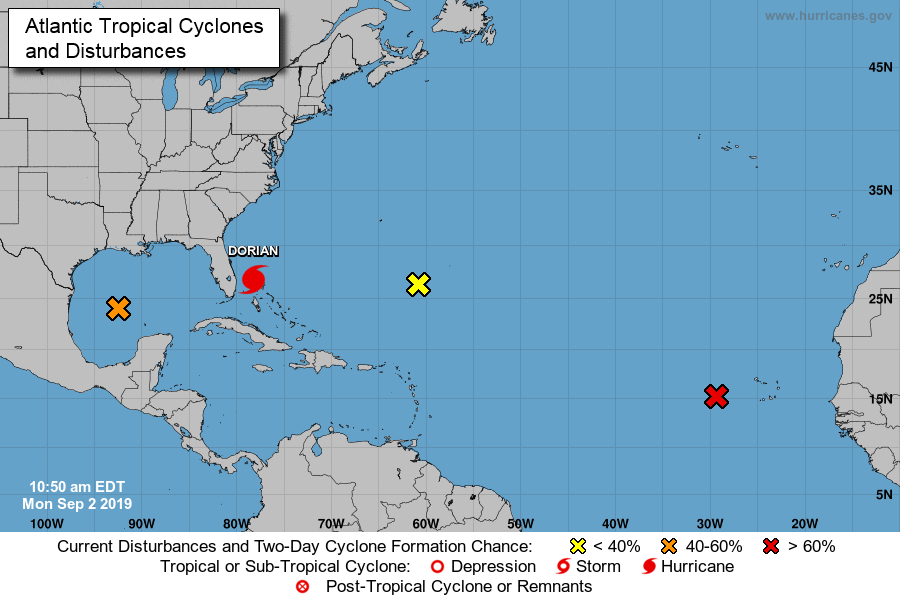 Hurricane Dorian's projected path as of 10:50 a.m. EDT on September 2, 2019. Courtesy of the National Hurricane Center.

FAU has canceled all classes beginning Friday at 12:30 p.m. and the university will close through Wednesday, due to Hurricane Dorian’s projected path.

As of 5 p.m. on Saturday, the areas between Deerfield Beach to the Sebastian Inlet are been under a tropical storm watch, according to the National Hurricane Center’s latest update.

Students that live on campus in Boca Raton may stay on campus but are advised to communicate with their housing office regarding their departure or if they plan to stay.

Students are advised to not return to campus until any information is announced.

Those at the Courtyard Marriott and Fairfield Inn are not required to vacate but any campus services and personnel will not be available to them.

Dining halls will also be open during the weekend for those residing on campus.
Friday, Aug. 30

Dining Hall – hours to be determined

FAU Athletics also announced a change to their schedule this weekend. All Friday matches will take place as regularly scheduled but the volleyball team’s Saturday match against Niagara has been canceled.

The men’s soccer game against St. Bonaventure scheduled for Sunday has been canceled, while Friday’s game against James Madison will be played as scheduled at 7 p.m. at the FAU Soccer Stadium.

FAU’s Living Room Theatres also will be closed Saturday through Tuesday due to the weather. They announced that anyone who purchased tickets for these dates is eligible for a refund.

On Twitter, some students criticized FAU on Thursday for sending out an initial announcement at 4:40 p.m. and not earlier. The university has yet to make a decision about canceling class on Tuesday but will make an announcement as soon as more information is available.

Yo this hurricane boutta hit Florida, and FAU hasn’t said a WORD about it

me seeing that uf canceled classes for tuesday and fau can’t even make a decision before we get our butts handed to us by another hurricane pic.twitter.com/CiAIMN0ybo

Check back with the UP for more updates.

Israel Fontoura is the news editor with the University Press. For information regarding this or other stories, follow @israelofontoura on Twitter or email [email protected]