Analysis: The FAU Owls take on the Ohio State Buckeyes in season opener

The Owls defense must contain Justin Fields in his Ohio State debut if they want to win in week one. 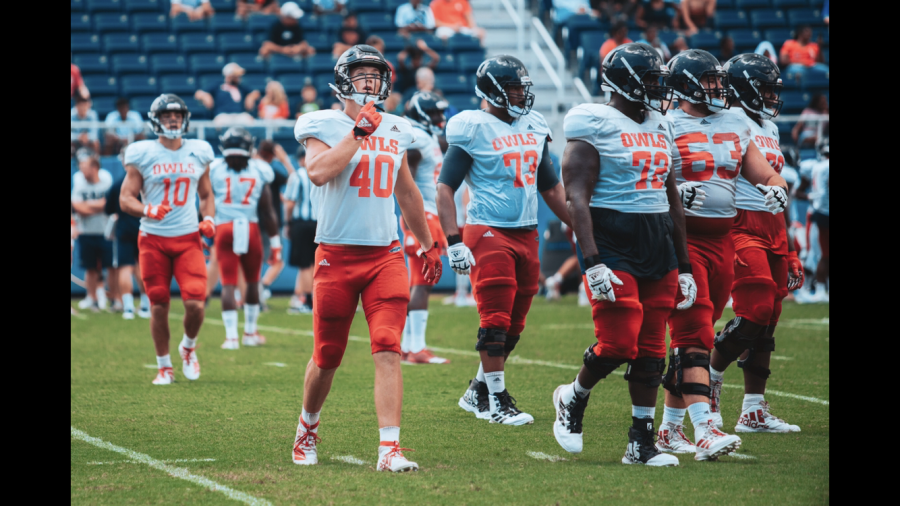 Harrison Bryant and the offense need to score more than usual if they want to level with the Buckeyes. Photo by: Alex Liscio

The FAU Owls are looking to start the 2019 season off with a victory against the fifth-ranked team in the country, the Ohio State Buckeyes. They play away Saturday at noon.

Ohio State coach Ryan Day will be making his head coaching debut with one of the most talented teams in the country, a team that had just finished sixth in the country last year and is looking to make a return to the College Football Playoffs.

The Buckeyes did lose quite a few players to the draft, including starting quarterback Dwayne Haskins, but they will replace him with Sophomore Georgia transfer QB Justin Fields who was the highest-ranked QB in the 2018 high school class by ESPN, ahead of Clemson’s Star QB- Trevor Lawrence.

The Buckeyes also have some players for Fields to use, including early Heisman dark horse running back JK Dobbins who is leading the rushing game and Senior K.J. Hill leading the receiving core.

FAU had an opportunity to do something similar last season, facing Oklahoma in their season opener with Kyler Murray replacing Baker Mayfield, but Murray wound up burning the Owls defense in a 63-14 loss.

If the defense can’t contain Fields and the Buckeyes offense, they are going to have to score some points on offense, which will be hard after losing offensive talents like Devin Singletary and Kerrith Whyte Jr. to the draft.

The Owls ground game now consists of BJ Emmons and James Charles, who will have to fill the void for the one-two punch that worked so well for FAU last season.

The passing game, which will likely be lead by Redshirt sophomore QB Chris Robison, who had a solid season last year that saw him win C-USA Co-Freshman of the year. Included in that season was a record-setting performance against Air Force in FAU’s home opener.

It is key for Robison to play like he did in his best moments last season, avoiding some of the inconsistency he had which cost the Owls a few games last season.

Harrison Bryant will likely be Robison’s best target at the tight end position with Willie Wright and Tavaris Harrison being the best of the wide receivers following the exit of Jovon Durante.

For the Owls to win this game, Robison will have to get all of his targets involved, as well as a huge game from Harrison Bryant and the running backs.

It will be hard for the Owls to reach that feat, as the Buckeyes defense boasts studs like junior safety Jordan Fuller, who had 81 tackles last year, and sophomore cornerback Shaun Wade, who lead the Buckeyes in interceptions as a Freshman with three.

This game will be a chance for the Owls to showcase themselves against one of the nation’s best teams on national television, as even a close loss could garner the program some attention going forward.