The laws laid out in sorority and fraternity constitutions vary by organization, but some of those differences are harder on women. 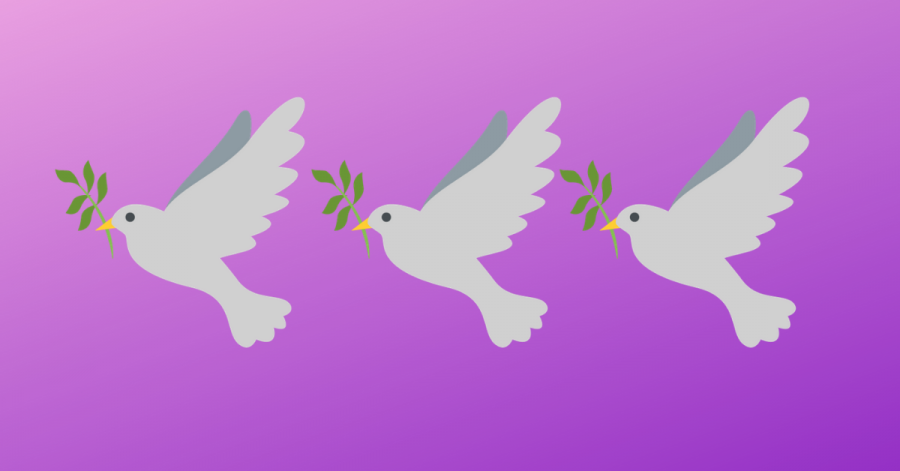 If members of the sorority Sigma Kappa make social media posts deemed inappropriate by another member, they're sent dove emojis that notify them to remove the post, according to their constitution. No such policies are on fraternities' constitutions. Illustration by Kristen Grau

Editor’s note: This piece does not include co-ed fraternities because they are not a part of the North-American Interfraternity Council or the National Panhellenic Conference.

If you’re in a sorority at FAU, you aren’t always allowed to wear pants to events.

And if you’re in a fraternity at FAU, your social media posts won’t be monitored as much as someone in a sorority.

Each fraternity and sorority has their own constitution, which lays out the rules they go by and the fees members must pay. These rules have to line up with the North-American Interfraternity Council (IFC) and the National Panhellenic Conference (NPC), which manage fraternities and sororities in the United States, respectively.

But a closer look at the chapters’ rules reveals several differences between what it’s like being a man versus a woman in Greek life — especially when it comes to dress codes and social media policies.
Dress codes
There are 14 fraternities at FAU, and four of their constitutions mention a dress code during meetings or events. That’s about 29 percent.

Sigma Chi’s dress code is representative of the other three: their members must wear “business casual” clothing at chapter meetings, which the constitution defines as a collared shirt, khakis or slacks, a belt, and closed toe dress shoes with no hat. You’ll be marked with an unexcused absence if you don’t follow the dress code.

Out of the 12 sororities’ constitutions at FAU, seven mention a dress code during meetings or events. That’s about 58 percent.

Some are simple — Theta Phi Alpha, for example, just calls for women to be “dressed appropriately.” But others, like Sigma Kappa, detail everything from the right type of necklace to whether you can wear pants or not.

Sigma Kappa’s dress code is the longest of the bunch, and specifies what can and can’t be worn during formal meetings, informal meetings, or “ritual events,” such as pledge or initiation meetings.

Formal meetings call for dresses, skirts, and dress pants, but you can’t wear mini-skirts or khakis. The dress code for ritual events is pre-determined: members must wear a white dress and white shoes. Pants are not allowed.

Even the specific kind of white that members have to wear is set in stone — “winter white” or “off-white” are not acceptable, according to the constitution. And you can only wear the sorority badge, “tasteful” pearls, and an engagement ring for jewelry. Watches aren’t allowed.

Delta Phi Epsilon has a similar kind of dress code. Ritual attire is all black, and members can’t wear pants or “excessive” jewelry. Your shoulders must be covered, so spaghetti straps aren’t allowed. Neither are backless dresses, or dresses that are low-cut in the front or back. Members risk getting kicked out of an event if they don’t fulfill these codes.

These kinds of rules are remnants of a strong patriarchy, according to Dr. Jane Caputi, a professor for FAU’s women, gender, and sexuality studies department. When women were considered property of men, their dress was meant to indicate class status and adherence to traditional feminine values like chastity and agreeability, she said.

Sigma Kappa’s constitution states that “dress for formal meetings should be appropriate as to show respect for the ideals upon which Sigma Kappa was founded.” The sorority was established in 1874.

“This whole kind of greater emphasis on women having to adhere to a stricter code is [similar] to adhering to proper gender, which in the view of feminism, does not serve women well,” she said.

However, others argue that dress codes reflect tradition and nothing more.

Sophomore Annie McGrath, a Sigma Kappa member and education major, said the dress code “doesn’t feel restrictive or anything. It’s just that we’ve had the same traditions since 1874 … We all want to look uniform.”

And freshman Holly Browder, a communications major and member of Alpha Xi Delta, said that sororities take their history seriously.

“We have a ritual book, and it’s a book that was created a long time ago, and we’re just continuing the tradition,” she said. “It’s like a bond that we have that only Alpha Xi Delta has.”

But Student Government’s Boca campus Gov. Luke Turner, who is a member of Pi Kappa Phi, said that tradition doesn’t have the same pull in fraternities as it does in sororities. Philanthropic and ritual events take up the traditional space, while clothing and other factors do not.

The UP reached out to Sigma Kappa President Sarah Coleman and multiple fraternity members for comment, but they did not respond as of publication time.
Social media
Clothing isn’t the only thing that sororities keep tabs on more than fraternities. Social media is another focal point.

While two of the 14 FAU fraternities (about 14 percent) have social media policies, four of the 12 FAU sororities (about 33 percent) have policies as well. And just like with dress codes, the sorority rules tend to be stricter.

Phi Delta Theta has the longest of the fraternity social media codes: You can’t post anything about underage drinking, drug use, nudity, inappropriate gestures, or “slander” of fraternity brothers. Pi Kappa Alpha’s code only says to not post about drugs or underage drinking.

However, it’s different in the sorority Sigma Kappa.

Members can’t post profanity, “disrespectful” comments, or pictures with “clothing that is unsuitable or distasteful.” Underage drinking is prohibited, but other photos with alcohol logos may also be deemed inappropriate.

There’s also a system for temporary, 24-hour content like Snapchat and Instagram stories. If any sorority member sends a dove emoji to another member, the member who received it is at fault and needs to delete the offending content from her social media within 12 hours. Screenshots of the content and the dove message are required, and timestamps must be provided as well.

And although the laws shift from sorority to sorority, the idea of supervision stays the same.

In Alpha Delta Pi, members need to give the director of standards and ethics viewing access to all of their social media accounts. In Alpha Xi Delta’s constitution, it states that members are required to sign a social media contract saying they won’t post inappropriate photos or comments, understanding that the consequences of breaking the rules are probation or suspension — although Browder said she never had to sign a contract.

But no fraternity constitutions mention members having to follow organization leaders on any social media platforms. Turner was surprised that this can be the case in sororities.

“This is America,” he said. “Normally you’re not friends with these people, [so] why are you following them?”

Browder said the expectations can help members “stay on track” and not post anything that may look bad to a future employer. McGrath agreed, saying that the social media regulations make sure members put a “clean” image out to the community and job market.

However, Caputi worries that these social media policies may have a subconscious effect on sorority members, even though sorority involvement is voluntary.

“By subjecting women to this kind of scrutiny, is it encouraging the kind of behavior where women are going to be asking themselves, ‘Am I perfect enough?’ … They may want to re-think that, and encourage a little autonomy, confidence, and more tolerance for a greater range of individual expression,” she said.