Despite struggling with depression and her best friend’s death, Aiello constantly went out of her way to take care of her friends. 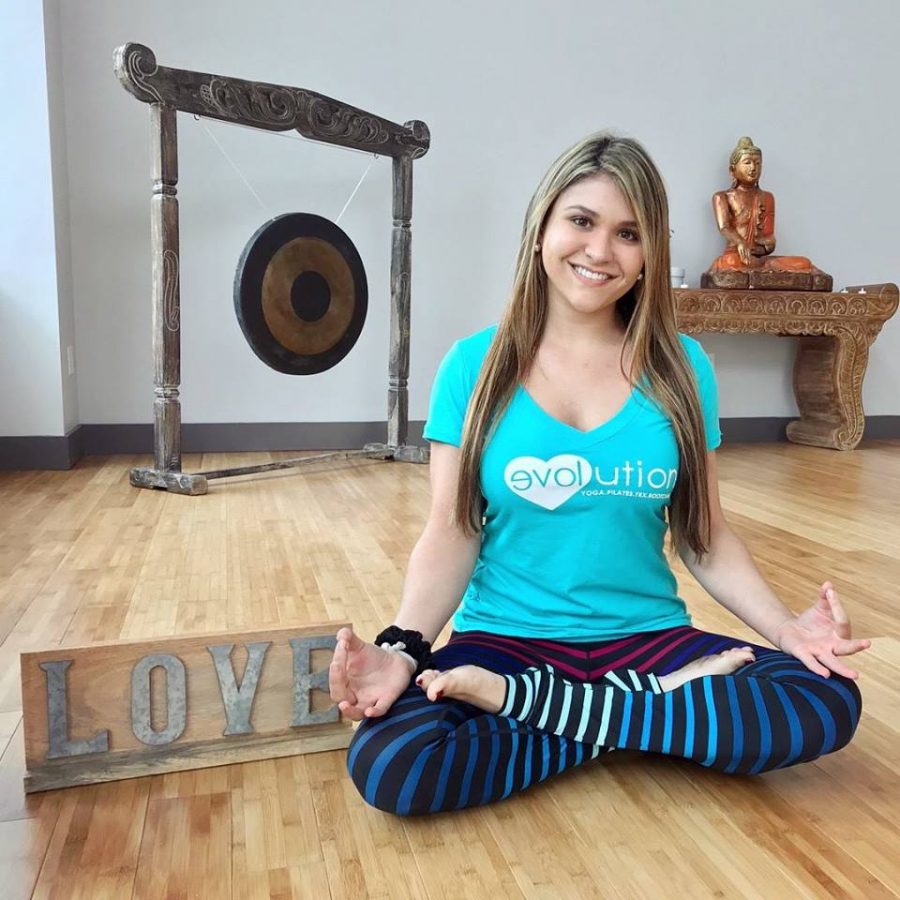 Sydney Aiello, a FAU student and Marjory Stoneman Douglas High School alumni, died in March. Her friends and teachers remember her for her selflessness, her love for yoga, and her "youthful spirit." Photo: Aiello's Facebook page

Editor’s note | If you need emotional help or support, FAU has free and confidential counseling centers on the Boca, Davie, and Jupiter campuses. Visit their website for more information, or call them at 561-297-3540.

Sydney Aiello received her yoga instructor certification last summer after months of training. She spent five days at a retreat in Costa Rica, where she — and other Marjory Stoneman Douglas students — would spend eight hours a day, every day, learning new breathing techniques and yoga positions.

Normally, when aspiring yoga instructors finally get certified, they take time off afterward and delay their first yoga class by months. It’s a “nerve-wracking thing,” said Brooke Wechsel, a friend of Aiello’s who got certified alongside her. “I’m actually still scared to do it.”

But Aiello wasn’t scared. She didn’t take a year off, or even months. She started teaching yoga the week after she got certified.

“She held her own class, and she got as many people as she could to come because she wanted to start helping as soon as she possibly could,” Wechsel said. “Because she knows what yoga gave to her and how it does actually help [with] a lot of feelings and internal conflicts.”

That’s what Aiello’s friends and teachers remember her for: her eagerness to help others — despite her struggle with depression and an eating disorder. Aiello was a Marjory Stoneman Douglas alumni and FAU freshman when she died by suicide in March.
A passionate yogi
Aiello held many things near and dear to her: cheerleading for Stoneman Douglas, being with her French bulldog, Riley, and dreaming of someday living in California. But the nearest and dearest, her friends said, was yoga.

Amy Kenny, Stoneman Douglas’ yoga teacher, guided Aiello on her yoga journey throughout high school. She had both Aiello and Wechsel as students and accompanied them both in Costa Rica, spending those eight hours a day by their sides.

During the week after Aiello got certified and before she taught her first paid class at a studio in Coral Springs, she worked closely with Kenny, trying to make sure that everything would go smoothly.

They organized Post-It notes that Aiello would put reminders on for her first paid yoga class to ensure it went smoothly. They were pink and had listed all the different poses she would do and were scribbled on from top to bottom, side to side.

“She was nervous, but she did it,” Kenny said. “And she was really good at it — she had a lot to teach and a lot to give.”

She was so good at it, she didn’t use the Post-It notes, she texted Kenny later.

“She absolutely lived and breathed for yoga,” said Elizabeth Stout, the former captain of Douglas’ cheer team, who cheered with her for three years. Because of yoga, “she really started to learn to love herself and to love her body and to love the way she looked … She just wanted to do what she loved.”

[aesop_quote type=”pull” background=”#282828″ text=”#ffffff” width=”content” align=”center” size=”1″ quote=”She had a lot to teach and a lot to give. ” cite=”Amy Kenny, Marjory Stoneman Douglas yoga teacher” parallax=”off” direction=”left” revealfx=”frombelow”]
A mental health advocate
Aiello was always one to make sure her loved ones were doing OK — even though for quite some time, she wasn’t.

According to her friends and teachers, she struggled with depression and an eating disorder throughout her junior year of high school. But she was so concerned with other people’s well-being that you could never tell.

“She was super happy … her smile was huge,” Wechsel said. “She would come in and you would never know that she had depression.”

Wechsel was also struggling with an eating disorder the same time that Aiello was. Despite this, Aiello would set aside her own “demons,” Wechsel said, to try and console her. And Wechsel would do the same for her, she said.

“Whenever I would feel like I wanted to … act on my eating disorder, I would reach out to [Sydney] and tell her how I was feeling. She would almost talk me out of it, make me feel more worth it, and that I shouldn’t do that because I’m beautiful … and just kind of validate that I didn’t need to do that,” Wechsel said. “We both did that for each other.”

Aiello eventually recovered through outside help and her friends’ support.

“She came out of it so strong and so good,” said Aiello’s AP Psychology teacher, Ronit Reoven, who was aware of her eating disorder. “She turned things around by getting a nutritionist and a trainer … She showed inner strength and came a long way.”

After her eating disorder recovery, she faced another blow: One of her best friends, Meadow Pollack, died in the shooting.

Three days after the tragedy, Aiello posted photos on Facebook of her with Pollack, and photos of football coach Aaron Feis, that read, “Meadow, I was blessed to call you a friend … [Feb. 14] will never be forgotten and these souls will continue to live through us. I love you all, now is time for a change.”

Kenny said that during their Costa Rica trip, Aiello thought of Pollack often, and “would always say, ‘Meadow would’ve loved this.’”

Reoven taught Aiello her junior year, and said Aiello would swing by her classroom during her senior year every so often to keep in touch. Aiello told her she wanted to go into psychology and medicine after college.

“For her, [psychology] was something she wanted to get more out of,” Reoven said. “She thought it was fascinating why people behaved the way they did.”

After the shooting, she participated in March For Our Lives in Washington D.C. and often shared posts on Facebook that promoted Change the Ref, an organization founded by a Parkland victim’s parents that pushes for safer gun practices. But what mattered more to her than changing gun laws was breaking the stigma surrounding mental illnesses.

Aiello was also one of Douglas’ peer counselors, a person who went from class-to-class talking about stress management and mental health — which weren’t things that were preached very much in the classroom, according to Stout.

“I think she wanted to put a spotlight on the mental health issue and that the shooter was mentally ill — and that ultimately led to what he did,” Stout said. Stout argued that people aren’t talking about mental health “as much as they should be,” but Aiello was someone who was frequently vocal about it.
‘She could lift anyone up’
Aiello left school early on the day of the shooting — but Stout was in AP Psychology when it happened.

Stout’s classroom was one of those targeted and where three students were injured and one died. She said that after the traumatic experience, she ran out of the building. Shortly after, a flood of texts and calls from loved ones came in — and Aiello’s name was one of the first ones to appear, she said.

“I remember Sydney was one of the first people that said, ‘Is everyone OK? Are you guys OK? Where are you?’ And we all answered, ‘We’re here … we’re good.’ And she [said], ‘I love you guys, be safe,’” Stout said. “She was just someone that always was there and always would check up on you.”

These acts were not uncharacteristic for Aiello. She consistently went out of her way to make sure the people around her were content.

One of Reoven’s favorite things about Aiello was the way she did so for her two young boys.

Reoven would bring the two to football games. Aiello was cheering on the sidelines, and her boys would rush toward the field from the stands and ask for her pom-poms — and Aiello would lend them without fail.

“She was just a youthful spirit,” Reoven said.

On Aiello’s and Stout’s friend Rachel’s birthday, Rachel was trying to get all her friends in the same room for a birthday party. She badgered and begged her friend group at the last minute, and all declined — except Sydney.

“[Rachel] said, ‘I really just want someone to hang out with me, please just someone come hang out on my birthday.’ And we were all busy, and Sydney was definitely busy,” Stout said. “But she [said],‘I’m gonna come.’”

She was always on top of people about other aspects of their health. MSD cheer coach Patti Thompson said that Aiello “was always on me” about drinking a healthy amount of water.

“She could just light up a room — she could lift anybody up,” said Thompson, who was her cheer coach for a year. “Even though she wasn’t a captain, she was a leader. She would always step up, volunteer, and help with a stunt.”

On cheer trips, Thompson said that Aiello — along with the rest of the team — was “upbeat” while singing and dancing and blasting her music the whole ride.

Thompson said that everyone on the cheer team that knew her, and even some who didn’t, showed up at her funeral to remember her.

Kenny, who Aiello passionately called her “yoga mom” said, “The world is a sadder place because she’s not in it.”

Kristen Grau is the managing editor of the University Press. For information regarding this or other stories, email her at [email protected] or tweet her at @_kristengrau.