Here’s what you need to know about Greek life parties

The UP learned about Greek party rules and myths concerning alcohol, drugs, and more so that you don’t have to. 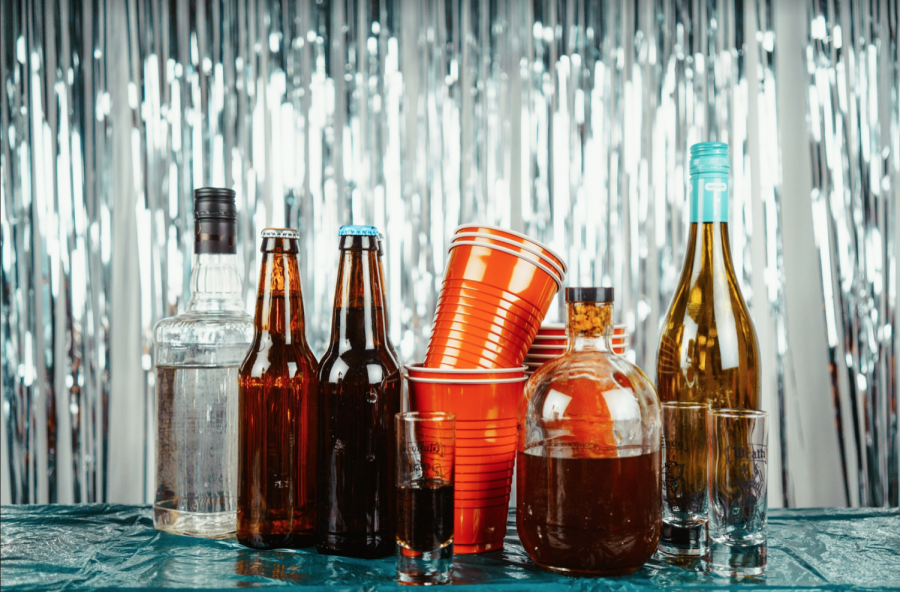 Alcohol is allowed at some Greek life events, but the Interfraternity Council passed a resolution that will ban hard liquor from September 2019 and forward. Photo by Alex Liscio

This story is a part of our April 2019 issue on Greek life at FAU. To view the whole issue, click here.

Editor’s note: The name of a former fraternity member has been changed to protect his identity.

When you think of Greek culture, you may think of wild house parties — usually with lots of alcohol and few rules.

However, FAU’s Office of Fraternity and Sorority Life, the North-American Interfraternity Council, and the National Panhellenic Conference have set strict guidelines for parties that you may not know about. Some are as minimal as when the party can be held, and others outline which booze you can drink.

A former member of Greek life said that party culture was filled with hard drugs and alcohol, while other frat party frequenters deny this.
The facts about Greek parties
The rules for sorority get-togethers are far different than the rules for fraternity gatherings.

“While it’s not illegal for sororities to [throw parties], frats are the ones who hold [them]. However, the National Panhellenic Conference, which governs the country’s 26 major sororities, maintains that sisters can’t swig booze in sorority houses — even as the fraternity down the street throws a keg party,” the Washington Post reported.

And according to Rafael Zapata, the director of Sorority and Fraternity Life, fraternities are usually the ones who do the heavy lifting by throwing the parties. He said he’s never seen a sorority request to have a party, which is important because all parties must be registered on Owl Central.

“Any events hosted by a registered student organization is to be submitted in Owl Central, whether it is on campus or not. Not just outside parties, but also on-campus parties, such as formals,” Zapata said.

Contrary to popular college myths, kegs are not allowed. And following the North-American Interfraternity Conference’s August 2018 vote, hard alcohol like vodka, whiskey, and bourbon will also be banned starting September 2019.

Greek life parties are also required to have a sober monitor, which is a person who makes sure everyone is safe while drinking alcohol. All members are required to undergo this training.
What do former members and students think of parties?
Chad, a former member of Greek life who asked to remain anonymous for safety reasons, said parties may not always adhere to guidelines.

While Chad was in a fraternity at FAU, he was often the sober monitor at parties. He said the main drink at every party was “jungle juice,” which is a mix of hard alcohol and sugary drinks, and that people used kegs despite the guidelines.

“I didn’t even know [kegs] weren’t allowed, it was so common,” Chad said.

Hard drugs were also common at parties, according to Chad — especially cocaine. Greek life formals were just a “getaway to do as much cocaine as possible,” he said, to the point where he was surprised that no one overdosed. They never had to call an ambulance on anyone for taking too many drugs or drinking too much alcohol.

But what stood out to him the most was the treatment of men who weren’t in other fraternities.

Chad said the brothers disliked non-fraternity men, often referring to them as “Goddamn Independents,” or “GDIs.”

The goal of the party was to get “as many females as possible in the house with as little males [as possible]. They wanted the biggest female to male ratio,” he said. “I think their mentality was if there’s more girls and less guys, then you have a better chance at getting laid.”

Ortiz recently attended a Greek life formal, where she said no drug use occurred — she only saw alcohol.

“At the formal, most people just drank. But as far as I know there wasn’t any hard drugs involved,” she added.

Ortiz said alcohol came from cans instead of kegs, and that alcohol use was controlled by sober monitors. She’s never seen any issues with parties, either.

“I think [parties] are fine, like if they’re going on it’s fun, but I wouldn’t say they’re important to everyone,” she said.
What do current members think about parties?
Kevin Buchanan, former president of Pi Kappa Alpha and Student Government president-elect, said parties are important to the social experience of college, regardless of what type of alcohol is allowed.

Buchanan refrained from commenting on whether sober monitors actually do their jobs, and if fraternity parties he attended had vodka or kegs. However, he said that while partying is an important part of “Greek culture,” it’s more than that as well.

“The Greek culture emphasizes leadership and building community. The Greek office every year works to better the safety standards set and creates initiatives that make socializing fun and safe,” he said.
What happens if a chapter violates the rules?
Greek life can have their events disapproved.

“Some reasons would be: not adhering to 10-day reservation room policy, not providing the documentation needed, not meeting with our office to review risk management plan on a timely basis, [or] not being on good standing with office of FSL/FAU,” Zapata said.

According to Zapata, the punishments can vary from probation, which can allow for someone to stay in a Greek organization with some restrictions, to loss of room reservations.

The University Press reached out to members of Pi Kappa Alpha, Pi Kappa Phi, and Alpha Delta Pi for comment on the rules at frat parties, but did not hear back in time for publication.

Sophie Siegel is the Editor in Chief of the University Press. For more information regarding this and other stories, email her at [email protected] or tweet her @SophSiegel.