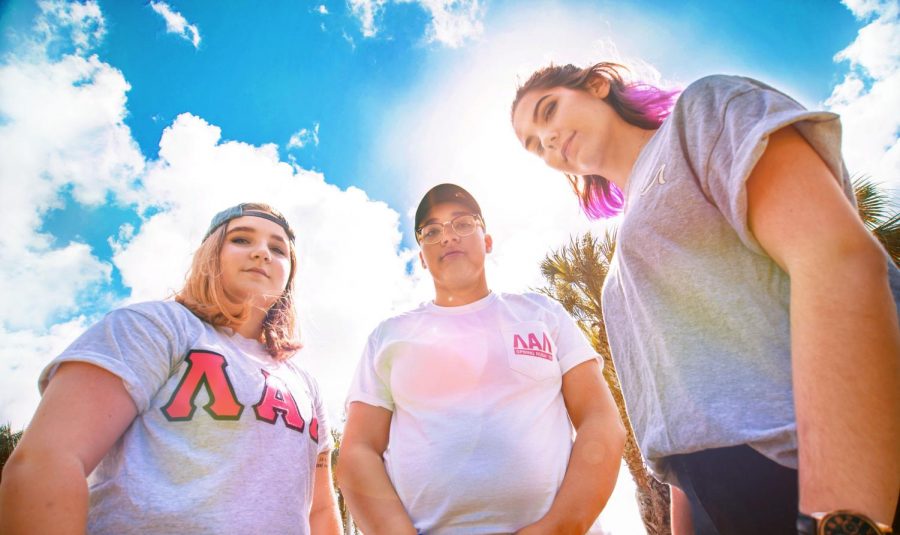 Not to be confused with a fraternity or sorority, LAL is a diaternity, which means it’s open to both men and women — and members of the LGBTQ community. The root, dia, means across or through in Greek, echoing the organization’s commitment to transcending boundaries.

The first of its kind at FAU, LAL is an inclusive space for those who want to be involved in Greek life that centers around activism and community. Open to allies and LGBTQ students, members are encouraged to “Live your truth,” which is the motto of their organization.

“Women in leadership should not be taboo. I hope that this campus can one day be at a point where an all-women [executive] board is no less common than an all-male [executive] board, and being part of that for LAL is one important step forward,” Gallagher said.

However, the diaternity is not recognized under the Office of Fraternity & Sorority Life because they aren’t in a council or an official governing body of Greek life. Even so, to be in a council you have to pay dues, get insurance, and other materials, which has been difficult for the 7-month-old organization.
The Foundation
Miernik originally reached out to other co-ed Greek life organizations in hopes of starting an FAU chapter, but soon came to the realization that she could start her own. Before starting her freshman year, Havens researched FAU’s Greek organizations but couldn’t find anything that fit her interests. That was until she found Lambda Alpha Lambda through a Facebook post. Gallagher found the organization through Havens, who convinced her to apply the week before applications closed.

“Once I went to the informational session and met some of the other members, I was hooked and knew it was something I really wanted to be a part of,” Gallagher said

Regardless of not being recognized in a council under the Office of Fraternity & Sorority Life, they’re not letting that get in their way. During rush week, Gallagher conducts interactive presentations, complete with packets, and trains new members on diversity, domestic violence, and leadership.

“It helps the members learn why diversity is so important to have in an organization and how experiencing that diversity in college helps people be more tolerant in the ‘real world,’” she said.

They also organize a “lifesaver training,” which is focused on suicide prevention. Since they aren’t trained professionals, they go to the Counseling and Psychological Services office to have a dialogue about this topic which deeply affects the LGBTQ community.
Community Impact
The most impactful memory in LAL for Havens was volunteering in Fort Lauderdale at the Covenant House, a shelter for the youth and women with small children.

“A lot of these people are the same age or younger than us,” she said. “Seeing people in our community, helping them, [and] creating a positive environment for them was my favorite thing.”

“It was really impactful to see the people you’re doing stuff to help. It elevated the reality. People are actually directly benefiting from an hour or two of time I’m putting in,” Gallagher said.

“I love how active it is. I love having the opportunity to get involved in the community,” Havens said. “We’re small, but we’re mighty.”

The founders are deeply invested in LAL because they want members to be welcome and validated where they otherwise may not.

“I really like being part of an organization that gives people a safe space,” Gallagher said.

Havens believes that FAU is “getting there” in accommodating LGBTQ students.

They’re currently in the planning stages of their biggest event of the year, the on-campus Pride Parade, which they hope will take place during Ally Week in April. Miernik hopes that, within the next year, the Boca campus will be more inclusive.

Miernik argued that the issues aren’t “people targeting people,” but the lack of accessibility and programming that needs improvement. She cites a lack of LGBTQ-focused events, no gender-neutral housing, and not enough general-neutral restrooms as a few of their most difficult obstacles.
Legacy
Starting a Greek organization and being a full-time student hasn’t been easy for the founders.

“[There] has been times I’ve been frustrated or overwhelmed,” Miernik admits. What keeps her going is “seeing that the members actually care.”

Her long-term goal is to have multiple chapters across the U.S., but for now, she wants to have their flag in the student union. Miernik wants to be remembered for her work with Lambda Alpha Lambda.

For the founders, being a woman in a leadership role has given them the chance to be more outspoken. With the three of them having previous leadership roles, they’re all familiar with not receiving the same level of respect as their male peers may have.

“Women oftentimes are overlooked and talked over in group settings, and I have been in situations where that’s happened to me as a young leader, but growing as a leader, especially in the unique position I’m in, as a member of an all-female [executive] board, gives me the chance to speak my mind without fear that I wouldn’t be heard,” Havens said.

From Miernik’s perspective, there aren’t many women in leadership roles, on or off-campus.

“I think being that representation and putting women in charge will help with [changing] that,” she said.

Although the board try their best to embody inclusiveness, it’s important for them to work alongside women because of their shared experiences.

“As a group of women, we tend to communicate more freely and bring a different energy to our organization than I feel I’ve been a part of in the past,” Havens notes. “I think that we as an all-female [executive] board have a completely different dynamic.”

Gallagher wants to set an example for women who want to equalize leadership on campus.

“Being a woman in a leadership role means breaking barriers that shouldn’t be there in the first place. I love that I have this opportunity to show other women that there are leadership positions on campus, and it’s important for us to take advantage of that,” she said.

Gallagher feels that because two out of three members are freshmen women, “it helps empower other freshman women and hopefully will inspire them to get involved in campus life early.”

Even though it’s her first year at FAU, Havens has big plans in store for LAL.

“[I want] to get Lambda Alpha Lambda’s name out there. The name of our organization is really important to me because, personally, I think we’re doing really great work,” she said.

Gallagher hopes to grow their membership and institute the organization in Greek life.

“It’s probably going to take the four years I’ll be at FAU, but once we’re there, I feel like it will officially establish us as a staple of FAU,” she said.

Israel Fontoura is a student government editor with the University Press. For information regarding this or other stories, follow @israelofontoura on Twitter or email [email protected].