Reggie Bain’s departure opened a competition for one of FAU’s tackle spots. 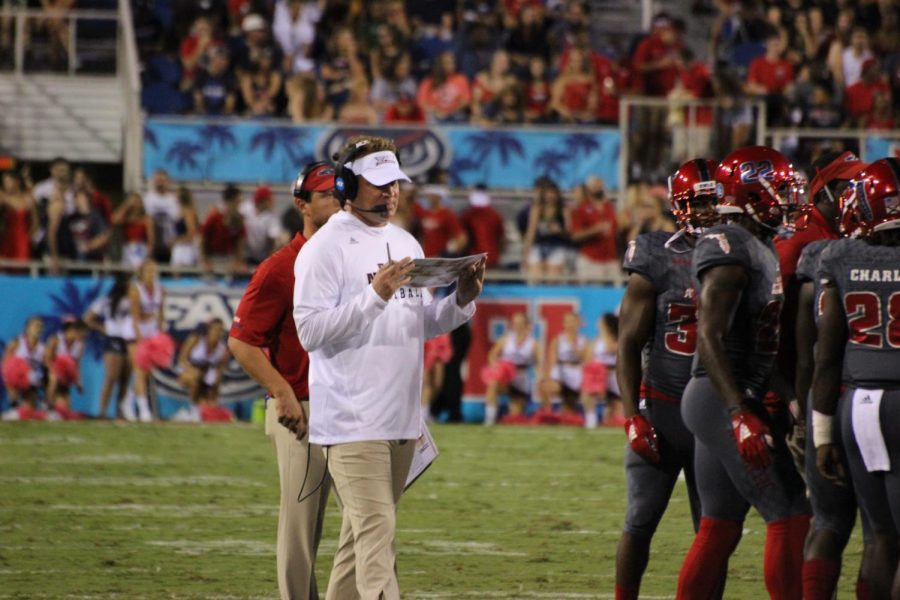 Lane Kiffin is entering his third season as the head coach for the Owls. Photo by: Christopher Blackshear

With FAU losing left tackle Reggie Bain to the 2019 NFL Draft, first-year offensive line coach Jeff Norrid is getting a head start this spring in finding a quality replacement.

Brandon Walton, who started at right tackle the past two seasons, is moving to left tackle to fill the vacancy left by Bain. He said he is focused on improving his pass blocking this spring, as the left tackle has the responsibility of protecting the quarterback’s blind side.

Walton still consults with Bain periodically on how to excel on the left side, as Bain was a standout there over his tenure at FAU.

Redshirt-freshman Marquice Robinson is one of the players competing for the right tackle spot vacated by Walton, and the young player is already drawing high praise.

“Marquice is the next leader,” Walton said. “I’ve never seen a young guy with the work ethic Marquice has, and I feel he is gonna be really good.”

Center Junior Diaz also returns for the Owls, which is huge because he is the anchor to the interior offensive line and provides an important leadership presence.

The Owls will have competition at the guard positions, with returners B.J. Etienne and Nick Weber competing with JUCO transfer Lavante Epson for the two spots, meaning one will be relegated to a reserve role.

Walton said his unit already has trust and familiariltiy with Norrid, as he was an offensive analyst who worked with them last season.

With uncertainty at the quarterback position and star running back Devin Singletary heading to the NFL Draft, FAU has to dominate upfront to be productive offensively. And they working at doing exactly that this spring.