SG will hold their elections at the end of the month. 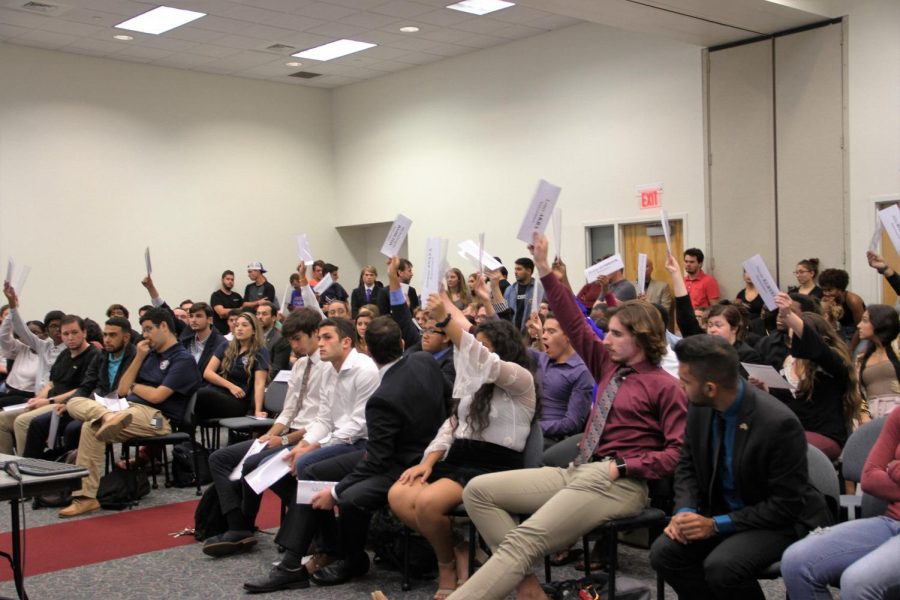 The Boca House of Representatives vote on a proposal during a House meeting, similar to how students will be voting for who will represent them in Student Government later this month. Photo by Hope Dean

Last year, FAU saw scandals and impeachments in the SG elections. Now we have a new election season ahead of us. Take a look below at who’s running and what you can you expect from each candidate.
President and VP tickets

Both are in Greek life — Buchanan previously served as the president of Pi Kappa Alpha. Persaud is currently in Alpha Delta Pi.

“We want to advocate for the students and hear the changes they wish to see here at Florida Atlantic University,” Buchanan said.

Buchanan has been involved with SG since his freshman year.

“I had always wanted to run for president and make a change ever since joining, and I am elated to see what the future holds,” he said.

Marr previously served as the House secretary his freshman year, while Thomas, who’s currently the Ways and Means committee chair, joined the House over the summer. Marr isn’t currently in SG.

“I entered this university with the mindset to make a difference,” Marr said. “I advocated for Greek housing on campus, community outreach and development, the mental health of our students, and academic success.”

Marr said he’s running for office because “I understand the stresses that everyday students go through,” such as balancing work and school.

“It’s experiences such as these that have motivated me to run for student body president,” he added.

Marr said he picked Thomas as his VP because they’re passionate about the same issues.

Prince and Robinson are both first-generation college students, according to their GoFundMe.

Their platform involves increasing student and athletic involvement and getting FAU “back to the heart,” which is their campaign slogan. Neither of them are currently involved with SG.

“Creating a change starts with the heart,” Prince said. “It starts with creating a solution or aid for our student homeless population, impacting our community, assisting DACA students, improving the quality of life for students on and off campus, and [increasing] student involvement.”
Boca Governor
Campus safety is at the forefront of the Boca Raton gubernatorial race. All three candidates agree on their safety issue, but what else do they agree on?

Bravo also wants to protect the burrowing owls on campus.

“We have an on-campus burrowing owl reserve. They are an endangered species, and we should do more to protect them. After all, they are our mascot,” he said.

Bravo recently released on social media that he supports students juuling on campus. FAU is currently a tobacco-free campus.

“I am a self funded candidate,” Colas said.

Zand is a sophomore double majoring in communications and political science.

“I am currently in the process of setting up a meeting with FAUPD to discuss their ideas and suggestions on how I, as the next governor, can make this campus safer,” Zand said.

“Funding for student media is among my major platform points,” Zand said. “Even though it is a university-wide issue I will become an advocate for this on Boca and give it the platform this issue needs.”
Jupiter Governor

Tyndall is the only candidate who already holds office — he serves as the incumbent Jupiter governor. His platform involves bolstering campus safety, improving FAU activities and events, implementing a new bike sharing program, and serving free coffee on the Jupiter campus. He also wants to promote Night Owls, a program that gives students rides around campus at night.

Tyndall said he’s “working with the FAU police in Jupiter to enhance safety measures, such as installing cameras, getting new wide angle lights for around campus.” He also wants to promote the Uber program.

Shah is running against Tyndall for Jupiter governor. The UP reached out to her for comment, but she did not respond as of publication time.
Broward Governor

Melissa Caras is currently running unopposed. The UP reached out to Carasa, but did not hear back in time for publication time.
Save the date
It’s not just election day that should be on your calendar. The presidential debate, where the candidates will talk in-depth about their platforms, and the election itself are still coming up.
Presidential Debate
When?

It will be held in the Boca Student Union’s Live Oak room, and will also be live-streamed on Facebook.
SG Elections
When?

You can vote on Owl Central.

Israel Fontoura is a contributing writer for the University Press. For more information regarding this or other stories, email at [email protected].

Sophie Siegel is the Editor in Chief for the University Press. For information regarding this or other stories, email [email protected] or tweet her at @SophSiegel.