Allan Nalven, an FAU alum, uses his Gameboy to create music — and plays it live to crowds of over 100 people. 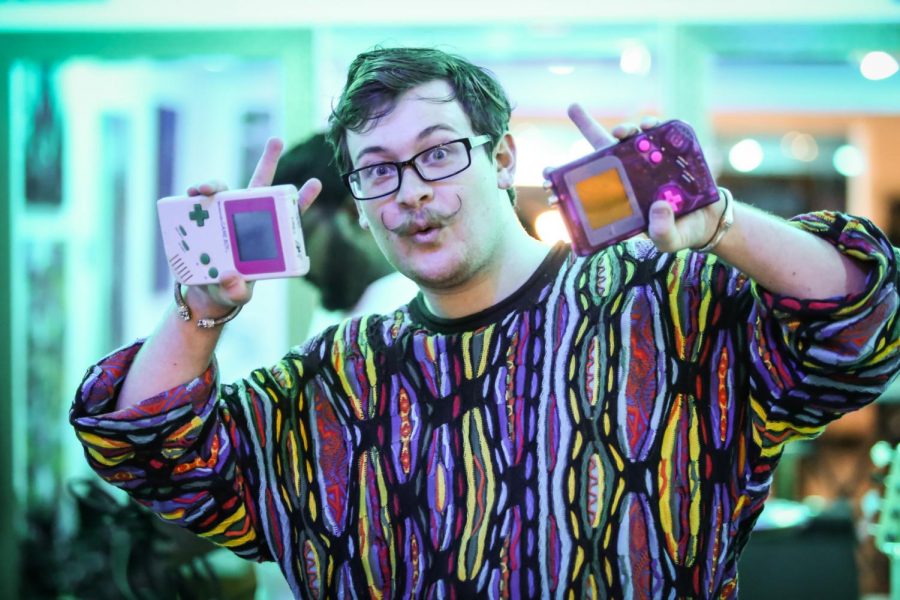 Allen Nalven prepares for one of his performances. Photo by Alex Rodriguez

When it comes to the Gameboy, Allan Nalven is a fan of Pokémon Yellow, Kirby’s Dreamland, and Link’s Awakening. But he also plays something else on the old system — music.

The Gameboy’s 8-bit sounds are the building blocks that Nalven, who graduated from FAU last December with degrees in computer science and sociology, stacks on top of each other to create songs.

The 25-year-old has been fiddling with the software to create music for years but decided last year to branch out into live shows all around South Florida, spanning from Churchill’s in Miami to Subculture Coffee in West Palm Beach. Some of these shows have racked in over 100 people.

“Just growing up I always played these old systems, and you know, it’s something that I always enjoyed doing,” he said. “Those kinds of sounds and melodies from those old pieces of hardware, I’ve always been nostalgic for.”

Nalven produces music with a program called Little Sound DJ, where he pre-composes loops of music and then combines them in different ways, “which is where the live performance aspect comes in,” he said.

The Gameboy wasn’t exactly designed to produce music, so Nalven adds “mods,” or modifications, to the system to bridge this gap. This includes cracking the device open and altering the motherboard. He may also add a new audio chip, or replace parts to enhance the bass.

Nalven learned how to be a Gameboy surgeon through the internet, where his fascination with 8-bit, or “chiptune,” music began in the first place.

He discovered “Anamanaguchi,” a group that plays music with a hacked Nintendo Entertainment System (NES) and a band, in 2011. This caused him to “delve deeper into the scene,” he said.

He tried to create conventional electronic music for a while, “but I almost found that they were too open-ended, that there was too much inherent freedom that the software provided that I never actually produced proper music with them. I’d just kind of always be fidgeting with them,” he said.

To Nalven, the limited set of sounds that the Gameboy can produce offers the “benefit” of restrictions.

“It kind of forces you to be creative in how you bend and break the rules and work within the constraints of the system,” he said. “Being exposed to chip music as a genre and then diving into that kind of gave me a lot of creative freedom that I otherwise didn’t have. And I also just think the novelty of making music on this old gaming device, and using things that they’re not intended [for], is always fun and interesting.”

So Nalven has one thing to say to creators: go for it.

“I think a lot of art, or just life in general, is just being kind of bad at something for a while until you’re eventually good at it,” he said. “So I think if you are someone who is inclined to tinker and do interesting things, then you should just do it and not make excuses as to why you can’t do something.”