Making clothes their future: Running a business as a student

Two FAU students are taking their careers into their own hands by creating and designing clothing brands. 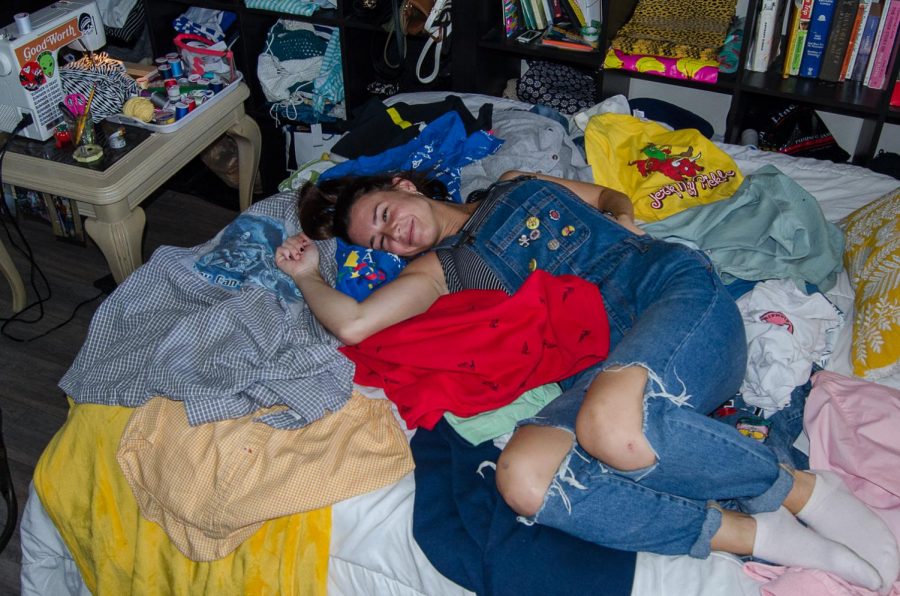 With opportunities to show off their work at pop-up shops and festivals across South Florida, FAU students are starting their own small businesses in fashion.

While creating and designing clothing is their dream, every entrepreneur — young or old — faces some bumps in the road. Here are two students, Julia Cataldo and John King, who are making their dreams into their future careers.

Julia Cataldo’s life was left in peril after her mother died in May 2016 while she was finishing her freshman year at FAU. She said she felt lost, and as if she was losing sight of everything. She wanted to pick up a hobby to get her out of her rut. 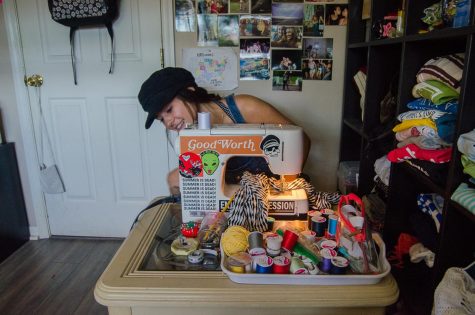 Cataldo said her mom was her “biggest cheerleader.” Photo by Violet Castano

So, Cataldo taught herself to crochet and sew, imagining the clothes her mother wore when she was young. What the 21-year-old journalism major ended up creating a year later was her own clothing line of retro, vintage, and upcycled clothing called “Peppy Debs,” named after her mom. She sells her clothing across the country and hopes to turn it into her full-time job after she graduates.

The only problem is, some people don’t take her passion seriously.

“People don’t really understand that I run everything myself. And that’s one of the biggest challenges, it’s a one-woman show. I’m not Forever 21. It’s just little old me in my bedroom,” Cataldo said. “On the one hand, I do want to get a real job and have a secure salary … but at the same time, I’d love to take Peppy Debs to the next level. Make it a full-time thing. But when I told my dad that, he laughed in my face.”

It took her six months to build up her brand to where she was making profits off her work, and instead of running bids over Instagram like she did in the beginning, she has her own website where customers can order the clothing she makes. Now, she’ll post around ten items at a time, and they normally sell out within three days. She makes around $400 for one round of clothing.

The Fight Against “Fast Fashion” 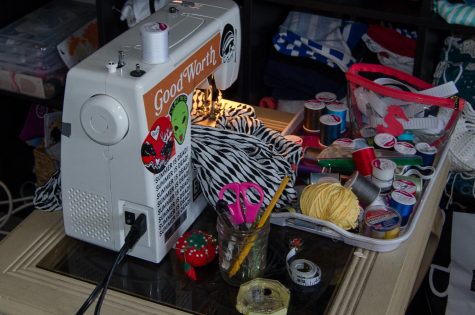 Cataldo is a believer in sustainable fashion, which is “clothing, shoes, and accessories that are manufactured, marketed and used in the most sustainable manner possible, taking into account both environmental and socio-economic aspects,” according to consulting firm Green Strategy.

Fast fashion, or mass produced clothing, is the opposite of sustainable fashion — it’s really bad for the environment. To make Peppy Debs sustainable, Cataldo buys pieces from thrift shops for cheap and transforms them into something new and trendy.

“People don’t realize that stores like Forever 21 and Urban Outfitters and PacSun are all fast fashion retailers, and the textile industry is actually the second largest pollutant behind the oil industry, but people don’t realize that when they’re buying their clothes,” she said. “So just by thrift shopping alone, I really value creating something out of clothes that are already out there.”

She finds name brand clothes and gives them makeovers to then sell for an average of $30 a piece. 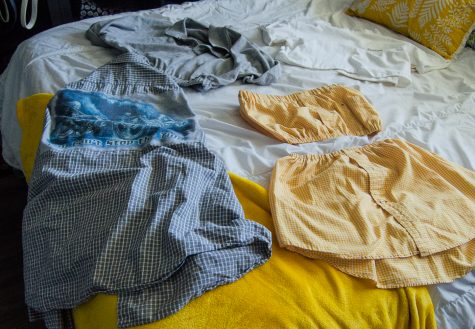 Her company is in the race “against” fast fashion. Photo by Violet Castano

Cataldo has a photo collage on the wall of her and her mother, her friends, and a drawn map of everywhere she’s sold clothes to in the U.S. Sprawled across her bed are some of the clothes she’s made.

Sitting in her room, looking at the photos and her creations, Cataldo thinks about how she got here. The biggest reason…

“My mom. One of the reasons why I started it was because she was my fashion inspiration. She could wear boy clothes and knew how to put all the different styles together and make it cool. When I’m sad and I miss her I just remember that she’d be so proud, and she would be my number one cheerleader,” she said. 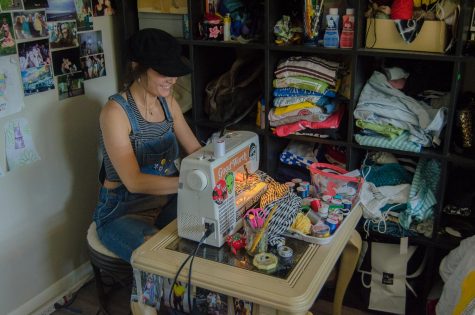 Cataldo works on the clothes in her room. Photo by Violet Castano

Cataldo says Peppy Debs started as a hobby, and nothing came together quickly. It took her a while to perfect her craft — she said she messed up a lot of pieces at first. But through all of the trial and error it took her, she knew her mom was there with her.

“The truth is, no one is an expert overnight. Even the people that are so good at something had to start from somewhere. That’s what I try to tell myself when I mess up on something,” she said.

But the toughest and most stressful trials are the ones Cataldo finds the most humbling.

“I get so caught up in running my own business and going to classes and being a student that sometimes I have to sit back and look at what I’ve done, and all that I’ve created,” she said. “There’s people all over the country that sit by their phones and wait to buy my clothes, and it’s crazy because I’ve dreamed of that since I was a little girl.”

Check out Cataldo’s clothing at PeppyDebs.com. 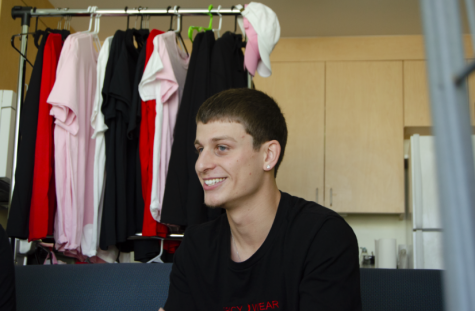 John King, the creator of Spicy Wear, runs the small business in his dorm. Photo by Violet Castano

John King first thought of starting a clothing brand in high school. He had designs of the items he wanted to make and would ask his classmates which ones they liked in surveys. Now, he’s making those goals a reality.

The 20-year-old marketing major started Spicy Wear in summer 2017. What began with a hat and t-shirt, both donning the pepper logo, turned into an entire clothing line and lifestyle brand.

In the beginning, King would try to sell his clothing at FAU, but it didn’t immediately go over smoothly.

“I would post up in the Breezeway with my little pop-up shops and try to sell my clothes, and at first people thought it was a joke. People didn’t take it seriously. You can’t expect everyone to like your things. But honestly, their friends are probably wearing Spicy Wear now,” King said.

Now, King runs his brand out of his dorm. His living room is filled with boxes and racks of hoodies, tank tops, t-shirts, hats, shipping equipment, and a photography set up.

“Every month, sales are increasing, and really I’m just doing this myself. I always said I wanted to be an entrepreneur, and I’ve always been into clothing, style, and what makes a top clothing brand. And I love the satisfaction of someone feeling good in something they buy,” King said. 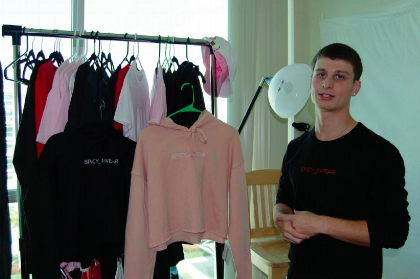 Spicy Wear has thousands of followers on Instagram. Photo by Violet Castano

He got the idea for the brand from a certain look he pegged as “spicy,” which led to the pepper on all his clothes — although some people thought he was representing Chili’s, he said. After he perfected his logo, King took to social media to build his brand and find inspiration for his designs.

“I really look at trends and I study Instagram. It’s a great tool to see trends and what women like. You have to know what people are looking for. I really like to absorb everything I look at,” King said.

And as for the designs themselves, he’s very particular. King says you’re not going to see “crazy, huge designs” on his clothes.

“The Spicy Wear brand is in the name, and I think that’s different from a lot of upcoming clothing brands. They’re all very loud. I like to keep mine clean and simple,” he said.

To further build his customer base, King studied web design and social media marketing to build an online strategy that worked for him.

King says the next step is to bring his clothing to malls. He’s also working on a swimwear and gym line. He says the most surreal part of the job is seeing people feel good in clothes he designs.

“It makes me so happy to see people around FAU wearing Spicy. That’s what I’m in it for. I don’t care about the money. I want people to love it,” King said.

Check out King’s clothing at SpicyWearClothing.com.

Cameren Boatner is a staff writer with University Press. For information regarding this or other stories, email [email protected].