Being a furry—or a dedicated fan of human-like animal characters—at FAU is about having fun, not having a fetish. 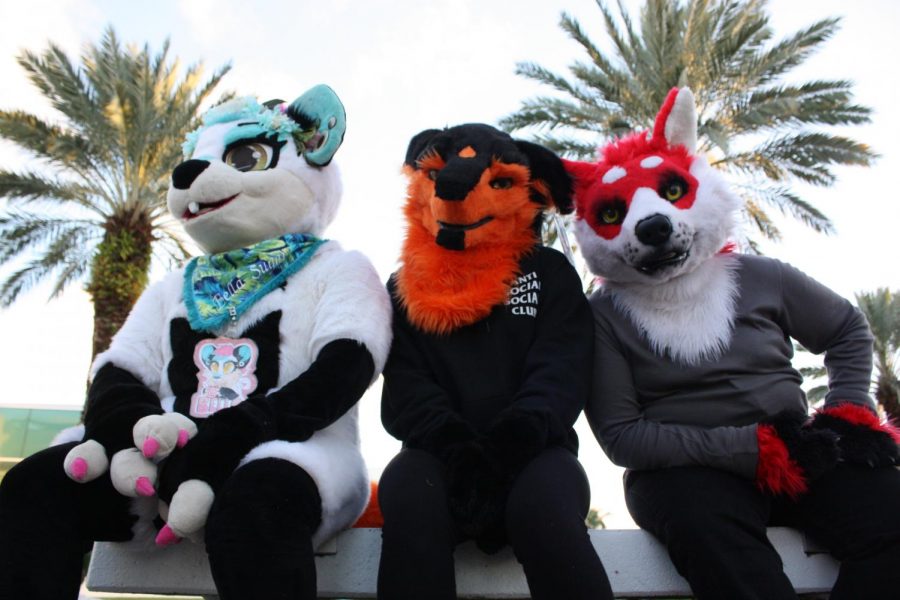 Editor’s Note: Some sources are anonymous or go by altered names in this story to protect their identities.

“My Little Pony was it for me,” Joey DeCelles said. “That was the beginning of the end.”

The animated children’s show about wide-eyed ponies that live in anthropomorphic utopia is what DeCelles, who is a junior communications major at FAU, believes turned him into a furry.

“Furries,” he said, are people with an infatuation for anthropomorphic animals — which are human-like animals such as mascots or cartoon characters. Those who don’t enjoy dressing up as anything from a bird to a sloth fall usually fall into two categories: People who could never fathom such a thing and, as a study from the journal “Society and Animals” found, people who think it’s a great mental disorder.

And whether you know it or not, the community is present at FAU.

DeCelles, like most furries, goes by an alter ego called a “fursona.” Fursonas aren’t simply a name — they’re either a real or fictional animal with their own likes, dislikes, and features. To display these, furries typically either commission an artist to do a digital drawing of their furry, or order full (or partial) customized body suits that resemble those of mascots.

“My fursona is like a guardian for me,” Skyler, an art major who preferred to use her fursona instead of her real name, said. “It’s like the universe is taking care of something for me.”

The world of furries
Furries at FAU like Skyler, whose character is a house cat, argue that their community is just like any other “fandom,” or fan community. But instead of rallying around a tangible fad, they rally around a concept for fun. Skyler thinks furries aren’t going anywhere anytime soon because of this.

“The fandom isn’t based on a TV show or a book … It’s the individuals in the community,” she said.

The individual-driven community flourishes online and at annual furry conventions, often called “FurCons.” These conventions are a hub for furries — a place to buy art, mingle, and meet new furries within the confines of a judgment-free zone.

There were a handful of major national conventions that attract thousands of furries, especially in 2018. The most-attended last year was MidWest FurFest in Illinois, which attracted nearly 11,000 people, according to the convention’s social media. Another notable convention last year was Anthrocon in Pittsburgh, which rang in 8,407 attendees, the organization also said on social media.

But DeCelles believes that not every convention worth going to needs to have a five-figure turnout. As a regular participant in local furry meets like Southeast Florida Furs, which lists 500 members online, he says that the experience is the same.

“I’ve met friends [at furry meets] that I wouldn’t have met under any other circumstance,” he said.

No, it’s not a “fetish”
Furry sex is what one FAU furry, “Alex” — an opossum character chose to remain anonymous in both name and fursona — calls the “elephant in the room.”

The “main misconception,” they said, is that being a furry means you have a twisted fetish.

Part of the reason that this misconception is common is because of the portrayals of furries on television and the internet. One such portrayal was an infamous episode of “CSI: Crime Scene Investigation” called “Fur and Loathing.”

In the episode, a furry is alleged to be a murderer and is brought in for an interrogation. The cops’ line of questioning eventually leads him to admit that he, at some point in the crime’s timeline, participated in a “furpile,” defined as “when all the animals start rubbing and wiggling.”

Furries argue that not only are these portrayals unrepresentative of the community, but they also have unfortunate consequences.

“I had an ex and I was showing him how much I love opossums, and I was showing him a [group of photos] I had on Tumblr… and because my fursona is an opossum, I had a drawing there and he was such a dick about it, honestly,” Alex said. “He took my computer from me and he locked himself in the restroom … It just made me feel really bad … He immediately jumped to the sexual thing and asked, ‘Is this a sexual thing for you?’ He went so far as to imply bestiality.” Bestiality is defined as sexual relations between a human and animal, according to Merriam-Webster.

‘Starving artists’
One of the unifying forces of the furry community is the art that makes fursonas possible.

All furries can describe their fursona in terms of personality and a few specific traits — but transforming that abstract aesthetic into a concrete representation takes a lot of effort and money.

Those representations typically take on one of two forms: digital art or customized animal costumes, much like Owlsley and other mascots. Although the latter may seem more sensational, it’s not all that common. The IARP found that less than 15 percent of furries own a full “fursuit,” as the outfits are called.

This is probably because high-quality full fursuits run upwards of $2,000, which is “lowballing it,” said DeCelles, whose girlfriend has made several full fursuits for people.

“They can take her weeks or even months to make,” he said. “But a fursuit is a luxury, not a necessity.”

Because not many furries opt for a full fursuit, the artists who make them usually can’t make a living in that line of work. That’s why they sometimes also create “partial” fursuits, which are paraphernalia like ears, paws, and tails. According to the same IARP study, over 70 percent of furries own partial suits.

However, Alex said that partial suits can be “dirt cheap.”

“Some commissions that took roughly four hours’ worth of work [were sold for] $10,” they said.

So furry creators often find themselves in an economic dilemma: should they make elaborate full fursuits that are out of reach for most, or make paraphernalia that is financially realistic but worth much less?

But suits aren’t the only way furries spend their money. Fur cons often raise money for animal shelters and other animal-friendly organizations. Last year, Anthrocon raised $42,051 for a dog daycare center called South Hills Pet Rescue in Pennsylvania, and the Midwest FurFest raised over $92,000 for a literacy advocacy group called SitStayRead, according to the respective organizations.

‘Don’t be a jerk’
A furry having their significant other accuse them of bestiality isn’t the worst discriminatory act that’s happened within the community.

During the Midwest FurFest in 2014, 19 furries were rushed to the hospital after coming in contact with chlorine gas. USA Today reported that authorities believed this was an intentional crime.

But despite this, furries try to remain optimistic because they know what they’re doing is “inherently silly,” DeCelles said.

His reasoning: there’s nowhere else you can watch “blue dogs break dancing” to electro-swing music than at fur cons. Skyler added that bowling in fursuits is also a common furry rite of passage.

“We embrace the weird … We say to hell with the people who think low of us,” DeCelles said.

They embrace the weird because, as Alex argues, the community and the friendships cultivated are well worth the weird looks and sexual stereotypes.

“I’ve had friends for over a decade now who have been with me through thick and thin,” they said. “It’s amazing that people can create this connection through something as absurd as anthropomorphized animals … I’m not going to say it’s not weird. Just don’t be a jerk.”

Kristen Grau is the features editor of the University Press. For information regarding this or other stories, email [email protected] or tweet her @_kristengrau.