The identity of the driver and the state of the preacher are unknown. 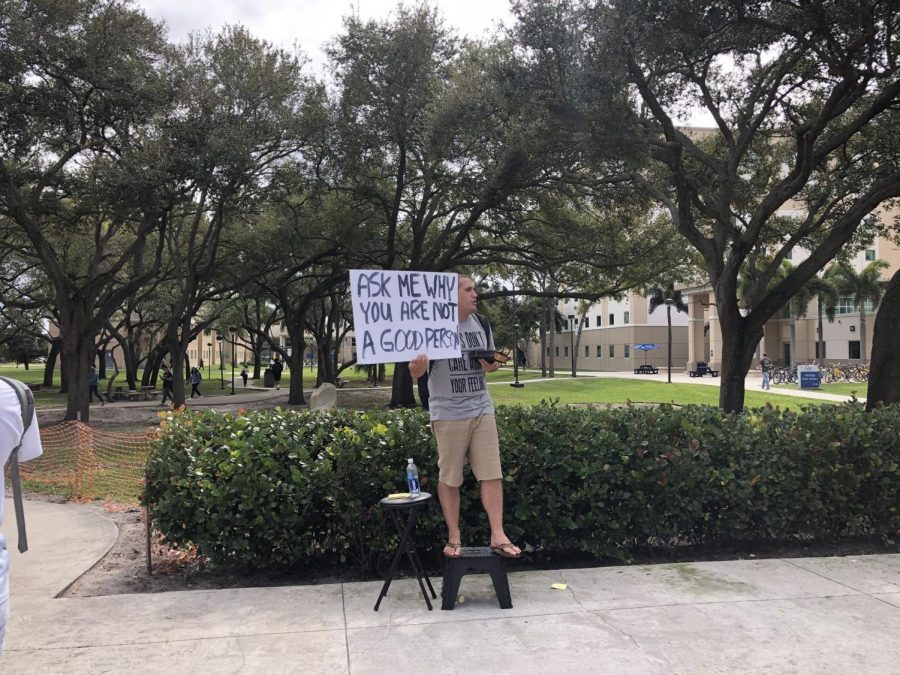 Ken has been at FAU before. Photo by Sophie Siegel

An anti-LGBT preacher who frequently visits FAU’s Boca campus was hit by a golf cart driving at a high speed Monday afternoon.

The University Press previously reported that the man is known around campus as “Ken,” but his name has not been officially confirmed. As of publication time, it is unknown whether Ken was hurt by the hit. The identity of the cart’s driver is unknown as well.

Some students flocked to social media to show their support for the driver.

the highlight of my day was seeing the guy on FAU campus preaching that “bEiNG gAy Is A sIn” get hit by a student in a golf cart,,, karma works in mysterious ways

and i’m proud of the kids at FAU for fighting back and not allowing that shit on our campus. being at one of the most disverse universities is only makes sense that we support each other no matter what race, gender, religion etc.

Welcome to FAU and if you’re a homophobic preacher we will run you over with a golf cart pic.twitter.com/yFoEdI9ds5

Others, however, were not happy.

no matter how much hate someone spreads, violence will never be okay https://t.co/Cc9eFjYrvj

in such a progressive environment, he shouts very hurtful things but he isn’t violent in any way. i don’t agree with anything he says, but i also don’t agree with resorting to violence just because you don’t like what someone says.

Its not a good look for the university and the student government may have to pay the guy’s medical bills + more.

Even if you think that preacher is a total d-bag, Nothing justifies what person driving the golf cart did.

If the guy had run into him on foot I could care less but that Golf cart means FAU is gonna have to cut that guy a check.

Sophie Siegel contributed to this story.