Two new departments with their own directors and staff could be created to fill the need for these events — but they need to be approved by higher offices first. 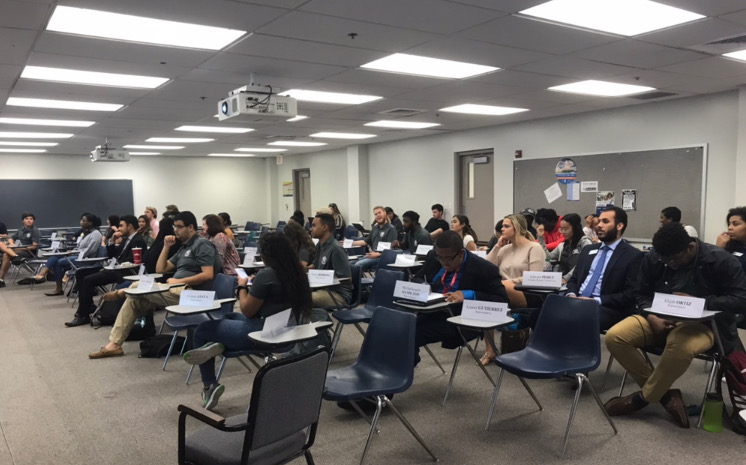 The Boca House of Representatives met today at 3:30 p.m., and voted to create two new departments to host events for specialized groups. Photo by Hope Dean

Campus pride parades, larger annual drag shows, and galas to celebrate all kinds of topics could be in the works after today’s Boca House of Representatives meeting, according to Multicultural Programming Director Elijah Colas.

The House passed two bills that would create new departments to handle events concerning religion, gender/sexuality, and the inclusion of disabled students — but they’ll have to go through a legislative process that includes the approval of campus Governor Luke Turner, student body President Kyle MacDonald, and Vice President of Student Affairs Corey King before being enacted, according to Chief Justice Isaiah Moriarity.

The first is called “Interfaith Programming,” and it passed by a 28-3 vote, with one abstention.  These events would support and celebrate different faiths on campus, and “foster interaction between these communities on campus and on a community level,” the bill states.

The second is called “Gender, Sexuality, and Inclusionary Programming,” and it passed by a 29-3 vote, with one abstention. Its events would look to educate the community about gender and sexuality, and also promote the acceptance of “all people regardless of ability or disability status,” the bill states.

This event “specialization” is important because it makes it possible to “serve a student where they are,” Colas said.

“They end up becoming one out of ten instead of being the one specific group that we focus on. You end up losing out on that when you end up grouping a bunch of students into a basket and saying ‘all of you drink from the same fountain’ when everyone can have their own fountain,” he added.

All of the events would also be student-to-student, which Colas believes is important.

Some programming related to the topics of the new departments — like the Lavender Lunches, where students can eat free food and learn about LGBTQ resources in the community — are available right now, but “when it’s faculty-to-student, there can be a disconnection with that sometimes,” he said.

The new departments would also expand the amount and types of events that are possible to host, as FAU’s Center for Inclusion, Diversity Education, and Advocacy is only able to fund educational events, Colas said.