Quarterback Chris Robison passed for 294 yards and two touchdowns in the Owls’ defeat. 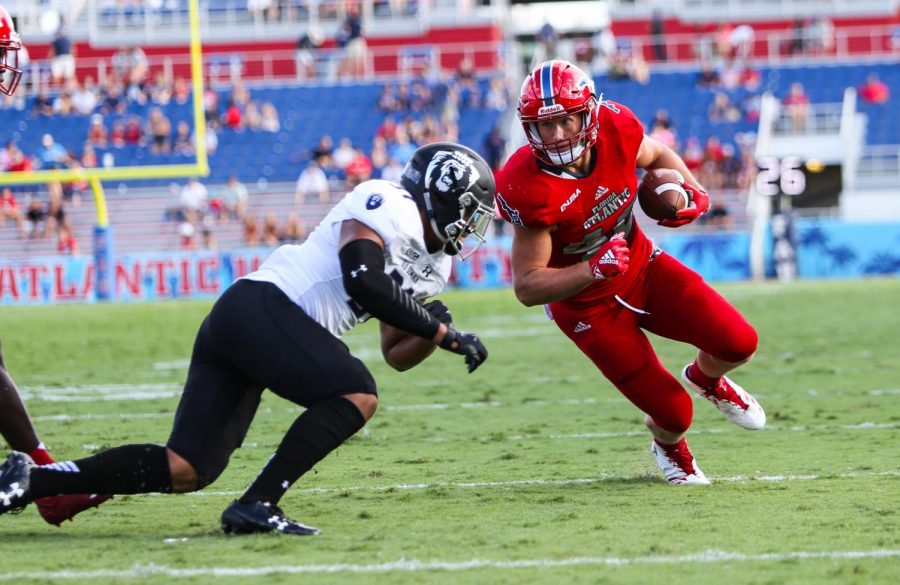 A strong comeback bid from FAU fell short last night, as it fell 41-38 to North Texas after rallying back from an early three-score deficit.

That lead would not carry over to the final whistle, however.

With his team down three with under two minutes remaining, FAU quarterback Chris Robison threw an interception to seal a Mean Green win.

The Owls would have clinched bowl-eligibility with a win last night. Now they head into a must-win situation in their regular season finale next week against Charlotte if they want to keep their postseason hopes alive.

Robison had his best road game of the season, going 21-35 for 294 passing yards and two touchdowns. He did, however, throw two costly interceptions on the night.

Running backs Devin Singletary and Kerrith Whyte both had strong games, the latter rushing for 91 yards and two touchdowns with the former tacking on 76 yards and a score of his own.

Tight end Harrison Bryant had a stellar performance in FAU’s defeat, racking up six catches for 138 yards and a touchdown. His 56-yard score in the first half was a career-long.

FAU’s comeback effort started with a beautifully executed 40-yard touchdown pass from Robison to Bryant to make the score 17-7.

Then on the Owls’ next drive, Singletary punched in a one-yard rushing score to cut North Texas’ lead to six.

Just after the touchdown, Rashad Smith caught a huge interception to give the Owls the ball back. Whyte scored on the ensuing play to give FAU its first lead of the game, 21-20.

Both teams traded touchdowns the rest of the night, North Texas gaining a late two-score lead on a 92-yard rushing score from running back DeAndre Torrey.

The 5-6 Owls look to finish their season .500 when they take on Charlotte next week at home. Kickoff from FAU Stadium is set for 6 p.m. on Nov. 25.