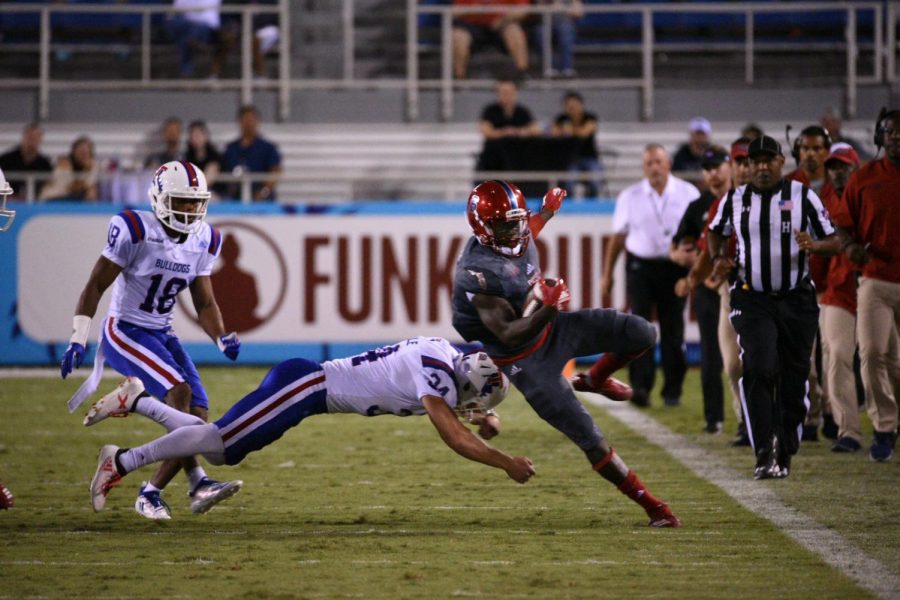 FAU redshirt junior running back Kerrith Whyte Jr. (6) attempts to run down the sideline against LA Tech and narrowly misses getting tackled. Photo by: Pierce Herrmann

Despite passing for only 157 yards between two quarterbacks, FAU used its dominant ground game to take down FIU 49-14 in the 2018 Shula Bowl.

FAU quarterback Chris Robison started the game and completed six of his 10 passes for 90 yards, but was pulled in the second quarter with the game tied at seven.

The Owls then put in De’Andre Johnson and never looked back.

Johnson passed for two touchdowns in the Owls’ victory, adding 50 yards with his legs.

The offense was led by running back Devin Singletary, who ran for 184 yards and three touchdowns on 27 carries.

Singletary’s backfield mate Kerrith Whyte also had a huge game. He ran for 165 yards on 17 carries, adding a touchdown.

The Owls’ rushing attack combined for 439 yards against the Panthers, scoring five of the team’s seven touchdowns.

FAU heads back home to play Western Kentucky next Saturday, kickoff at 5 p.m.