Cheer and dance facilities removed due to football construction

FAU’s spirit athletes lost their locker rooms to the new Schmidt Family Complex for sports — and it’s unclear if they’re getting them back. 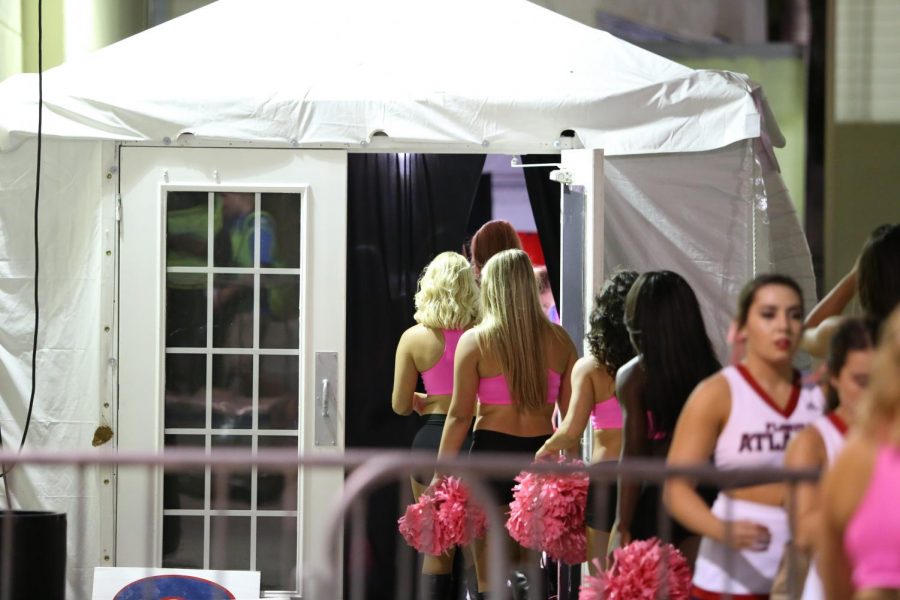 Over 50 cheerleaders and dancers share this pop-up tent, which works as a make-shift locker room. Photo by Alexander Rodriguez.

To most FAU football fans, the rain delay during the first 2018 home game against Air Force wasn’t a big deal.

Fans flocked under the stadium roof, and football players retreated inside their new locker room. But the spirit team members — cheerleaders and dancers — stood in the rain.

Last year, the spirit teams had a facility to themselves, which included locker rooms. But with the construction of the sports-oriented Schmidt Family Complex, they were left with a rented tent after the situation during the Air Force game.

“We work just as hard as some of the other sports,” former cheerleader Kayla Ganzer said. “It wouldn’t be nice to just throw us in the rain after all the work we put into supporting FAU.”

The Schmidt complex will double the size of the football locker rooms, which recently added “a foosball table, a players’ lounge, and personalized name plates above the lockers,” the University Press previously reported.

But currently, 54 spirit members, who are all athletes in the National Collegiate Athletics Association (NCAA), share a single pop-up tent with each other, as well as the media room for 30 minutes prior to kickoff.

“This is a temporary situation due to the construction,” said Senior Associate Athletic Director Jessica Poole via email. “As more buildings and space comes available through the construction process, we will work to find cheer and dance a more permanent space in our new facility.”

Poole didn’t specify a permanent space that’s in the works. And according to the complex plans, there is none.

Along with the completed football locker room renovations, here’s what else is confirmed on the $65 million complex plans, written in 2016:

It’s also noted on the report that an indoor practice field will be built if the budget allows it.

The plans list what spaces in the stadium will be kept and which ones will be renovated. Along with equipment rooms and offices, the cheer squad’s locker room and dressing room are both being “renovated.”

The University Press reached out to Titus Queen, the assistant athletic director for facilities, operations and events, as well as Brian Battle, the senior associate athletic director for comment on the renovations. Battle has not responded as of publication time, while Queen directed the UP to Poole, who called it a “fluid situation.”

The previous cheer locker rooms were personalized and spacious — the lockers presented the athletes’ names. Equipped with a bathroom and large common area, the FAU spirit locker rooms trumped those of some other Florida colleges.

UCF head cheer coach Linda Gooch said via email she “would not characterize [UCF’s cheer facilities] as a ‘locker room.’” Instead, they have a long counter with a mirror, a few chairs, and a space under the counter to store the cheerleaders’ bags.

Another set of teams who don’t have a facility is FIU’s spirit program. Ashley Williams, a former FIU cheerleader,  said that this was inconvenient on several occasions — especially practices.

“I think cheer and dance [programs] are super underrepresented,” Williams, a current Miami Dolphins cheerleader, said. “It’s important for every team to be accommodated for, because that’s the only way for them to be successful.”

All FAU cheerleaders and dancers contacted declined to speak on the record due to a comment from their coaches.

“We were asked not to speak to anyone,” one spirit member, who wishes to remain anonymous, said about the situation via social media. “My coach gave us strict orders.”

The UP reached out multiple times to Paige Wier, head cheerleading coach, and Claudia Soto-Vaca, head dance coach, but neither responded for comment.

Kristen Grau is a staff writer for the University Press. For information regarding this or other stories, email [email protected].