High school sophomore takes political action into her own hands

At 14 years old, Elizabeth Buckley is part of an activist fellowship at FAU, works as a political intern, and was nationally recognized in D.C. for her involvement in a nonprofit organization. 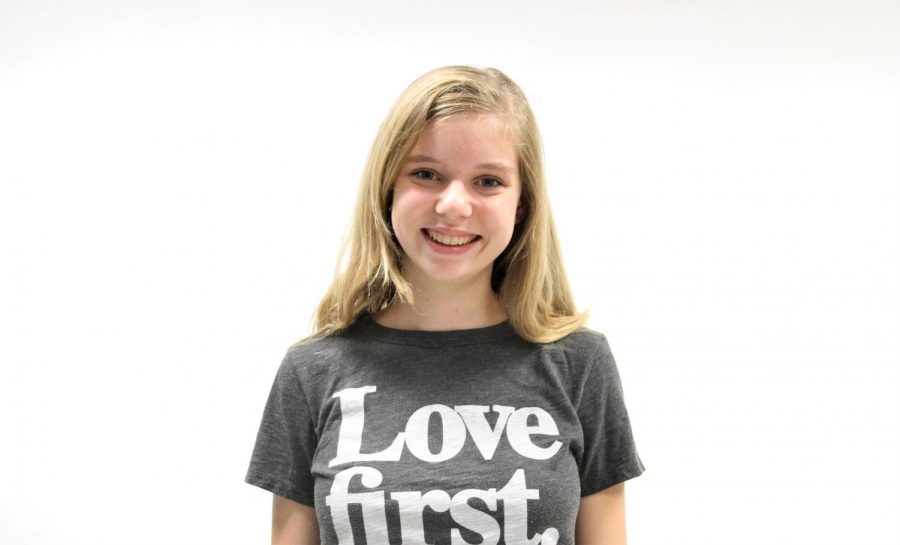 Elizabeth Buckley can’t get her driver’s license for another two years. But what she can do is explain the inner workings of the Vietnam War protests and what made the Occupy Wall Street movement unsustainable.

Not having a driver’s license made getting to the Women’s March in Washington, D.C. and March For Our Lives in Parkland a bit challenging, but the activist still managed to arrive.

“If we’re all more conscious at a small level, small acts can really create a big change,” Buckley said. “That’s something we’re all empowered to do.”

Buckley is a 14-year-old high school sophomore and already has a lengthy resume on social activism. She’s created and attended multiple protests, interns for Sen. Lori Berman in Palm Beach County, and was nationally recognized in D.C. for her work with a nonprofit organization. Buckley is also one of 30 participants in FAU’s inaugural Barb Schmidt Fellowship: Cultivating Community Involvement, Activism, and Social Change designed for high school students in Palm Beach County.

The fellowship meets every other Saturday and hosts FAU faculty and community activists as speakers for the first semester. The second semester is where students can create a hands-on community project plan of their own, joining forces with a nonprofit of their choice.

Buckley along with two of her classmates chose to raise awareness for a program that allows prisoners and students in high school and universities to exchange letters, called Exchange for Change. With leaders of the program, the trio brainstormed ways that technology could lessen incarceration inequality among race and class.

The three Grandview students were nationally recognized for this criminal justice reform work in Washington, D.C. earlier this year by the Center for Policing Equity (CPE), a nonprofit known for its National Justice Database that documents law enforcement trends, and Google for Education.

The CPE flew the students for free to a gala in D.C. that overlooked the Lincoln Memorial and State Department, where they received the first “Young Justice Nerd” award ever given.

Samuel Berey, Buckley’s mentor for Exchange for Change and teacher, traveled with them across the country. Berey said he admired how she engaged with the prominent lobbyists and attendees.

“We’re sitting at the table next to Google for Education … and a lot of big names, and Ellie is sitting right there — the youngest one,” he said. “She came off so worldly and curious … and was almost commanding the table.”

Buckley mingled, but was secretly in awe while standing in the VIP lounge of the U.S. Institute of Peace Press that night.

“More than ever, I was proud of my desire to be a part of change,” she said.

The “Young Justice Nerd” aspires to make change in the Oval Office, but for now is grinding away on the local level as an intern for Sen. Lori Berman in Palm Beach County.

Over the summer, Buckley met with constituents on Berman’s behalf to talk about issues in South Florida. It was also an opportunity for her to gain insight on how to make change through policy enactments as opposed to protests and rallies — and the latter are forms of activism that she’s very familiar with.

Exactly a month after the Stoneman Douglas shooting, Buckley and her classmates at Grandview Preparatory School coordinated a nearly school-wide march on campus. Students, parents and teachers gathered on the courtyard with signs and formed a circle of silence for a minute, while the bell rang 17 times in honor of the same number of victims.

They also took it a step further and vouched to keep the students’ handmade signs advocating change in gun policy on bulletin boards across the school.

“Our goal was to facilitate change and not simply lead it,” Buckley said. She would later take to local gun control panels to make her voice heard.

And of all the protests she’s attended, none was more “surreal” than the March For Our Lives in Parkland earlier this year.

“We walked past the school, and it was overwhelming,” she said. “It was a sight to behold.”

Despite being only a sophomore in high school, she has been an activist from almost the very beginning.

Buckley’s parents are avid Democrats. In the midst of former President Barack Obama’s 2008 campaign, John and Beth Buckley were rampant in their efforts to get out the vote. They went door-to-door, helped people register to vote, and even carried their three-year-old daughter to a Delray Beach pub for a campaign fundraiser.

After starting preschool a year early, Buckley too began to show an interest in democracy.

She and her mom had the idea of holding a mock election at school the same day that Obama and Sen. McCain were facing off. Her teacher agreed, so the classroom became a voting poll. Buckley was noticeably more fired up about it, and had convinced the other preschoolers to vote for her candidate.

Obama had two victories that day.

That election year spurred a love for learning about the presidency.

“I could recite their birthdays and their terms back then,” she said. And although she admits she can’t remember all of them now, that same political enthusiasm never went away.

Her peers, often older, are inspired by her.

“I’m not acquainted with anyone who’s as active as her as a teenager … but when she goes off to an Ivy League school, she will realize there are other 14-year-olds out there like her,” Buckley’s best friend Tasman Rosenfeld, who is a freshman paleontology major at Yale, said.

But Buckley has been inspired by people in turn — and out of all of them, there’s one that stands out, even though the two have never spoken.

Right before one of Secretary Hillary Clinton’s 2016 rallies in Florida, Buckley purchased a black shirt from American Eagle that said “Future President” in bold white letters. After waiting three hours to hear her idol speak, Buckley was pulled aside and asked to sit right behind Clinton and be seen on camera.

Clinton’s eyes hovered over the audience behind her — and seemed to notice the bold white letters.

“I had a brief second of eye contact with her, which was incredibly empowering,” Buckley said. “I was elated.”

Buckley still won’t be able to drive for another two years. But when she turns 16, she’ll pre-register to vote — and then get her license.

Kristen Grau is a staff writer with the University Press. For information regarding this or other stories, email [email protected]