Quarterback Rafe Peavey struggled in his first start for the Owls. 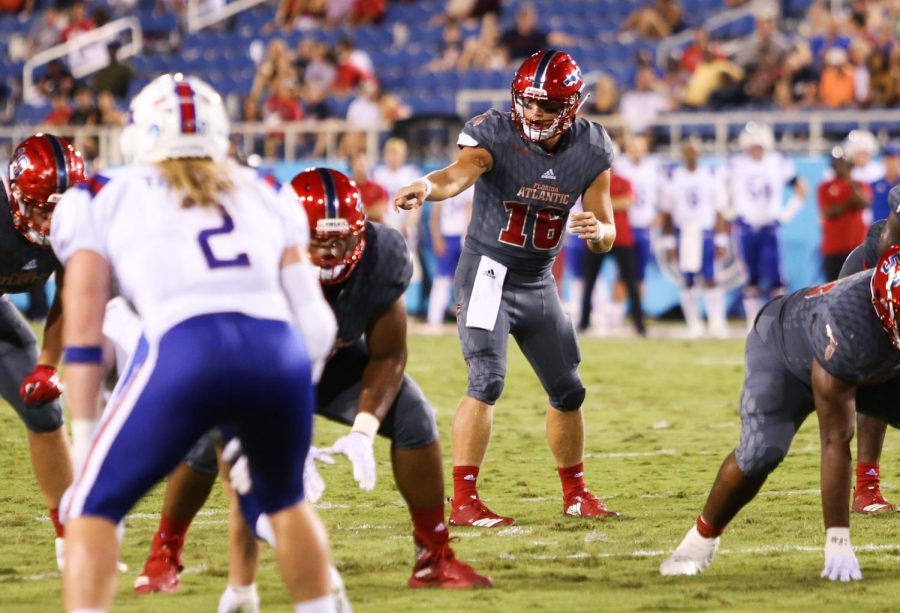 FAU graduate student quarterback Rafe Peavey (16), who was the starting quarterback against LA Tech signals to his teammates to prepare for play. Photo by: Alexander Rodriguez

Another game, another conference loss.

The Owls dropped their second-consecutive game in Conference USA play with its 21-13 defeat to Louisiana Tech, ending their home winning streak at 10.

Rafe Peavey got the start for Chris Robison, who injured his ankle against Marshall last week, but failed to take advantage of the opportunity. He threw for just 115 yards and no touchdowns against the Bulldogs, turning the ball over twice.

Robison entered the game for Peavey in the fourth quarter, FAU trailing, but he couldn’t guide his team to the endzone.

The Owls began the game on a 10-0 lead and the offense seemed in sync for the first time in a while. But after the first quarter, they scored just three points.

FAU wore down in the second half after defending the run well in the first, allowing Louisiana Tech running back Jaqwis Dancy to finish with 116 rushing yards and a score.

The Owls’ biggest problem was penalties. They committed 11 penalties on the night, including a leaping the shield call late in the game which gave Louisiana Tech the ball back in the closing minutes.

With tonight’s loss, the Owls fall to 3-5 on the season and 1-3 in conference play.

FAU goes on the road to take on interstate rival FIU next Saturday, kickoff at 7:30 p.m.