The Owls would improve to 2-1 in conference play with a win tomorrow night. 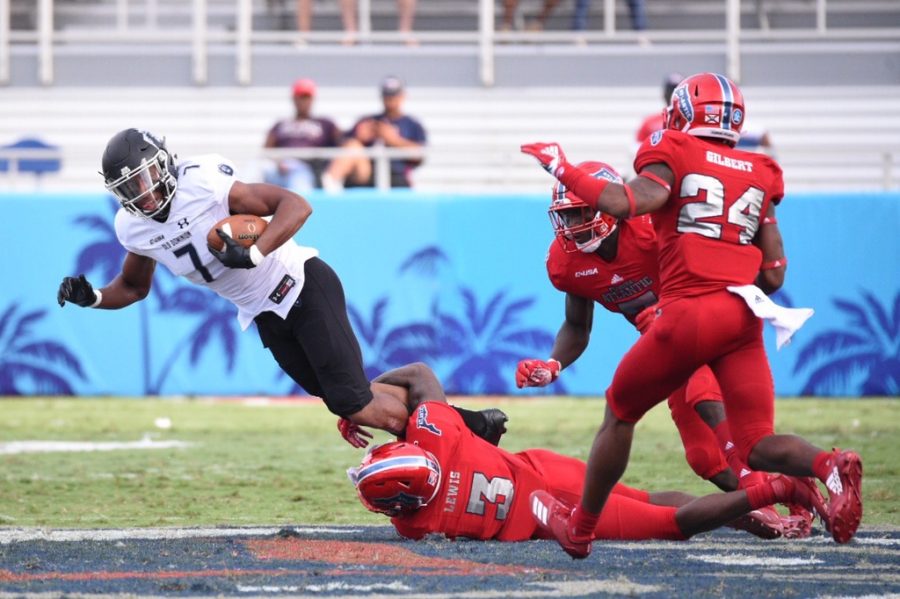 Coming off a bounce-back win against Old Dominion and a subsequent bye week, the Owls hope to be well rested for a crucial road bout with the Marshall Thundering Herd.

While the Owls showed promise in their Week 6 victory over the Monarchs, they need to continue to improve defensively if they want to pick up a win tomorrow night.

It starts with neutralizing a Marshall running game that has shown dominance recently.

The Thundering Herd rushed for 319 yards last week against Old Dominion, getting 195 yards and two touchdowns from running back Tyler King. Marshall relies heavily on its ground game, so FAU would be wise to load the box and force passes.

FAU will take on the challenge of defending Marshall’s explosive rushing attack without its best run-stuffer, linebacker Azeez Al-Shaair.  He is reportedly out for the season after sustaining a knee injury in practice earlier this week.

This week the Owls’ dynamic running back tandem faces one of its biggest challenges of the year. Devin Singletary and Kerrith Whyte Jr. take on a Thundering Herd defense that gives up a Conference USA-low 3.0 yards per carry.

When quarterback Chris Robison last took the field, he threw for an impressive 339 yards and two touchdowns in a winning effort. He needs to put together a similar performance for FAU to win this week.

If Robison can stay hot and his offensive line keeps him upright, the Owls will be in store for a big game offensively.

This is a must-win game for FAU if it hopes to climb back up the C-USA standings. If the Owls can come out with a victory in a stadium they have never won in before, it will show they their early-season struggles are far behind them.

FAU can improve to 2-1 in conference play with a road victory over the Thundering Herd tomorrow, kickoff in Huntington, WV is set for 2:30 p.m.