Owls Among Us: How Jeron Bornstein went from owning a single dollar to free tuition

After being homeless, going to jail, and recovering from drugs, 28-year-old engineering major Jeron Bornstein made a new life for himself at FAU. 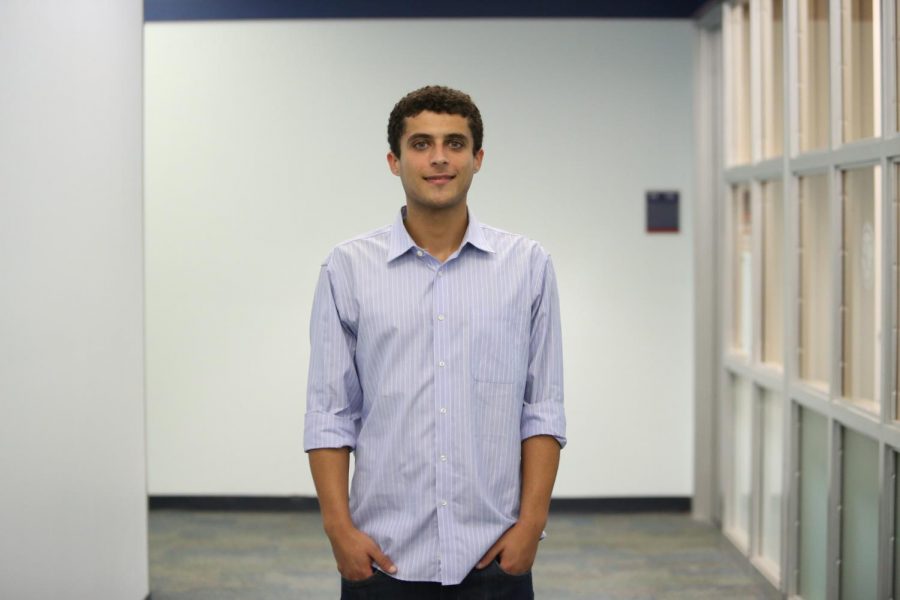 Editor’s note: This profile is part of a collaboration with FAU Owl TV and complements an episode of its “Owls Among Us” documentary series, which can be watched above.

Jeron Bornstein was “broke, alone, and depressed as hell” when he volunteered at an FAU advising event last summer — a 27-year-old living in a 2002 white Ford Taurus with only a dollar bill to his name.

He had no idea what the event was even about. All he knew was that there was going to be free food, and he was starving. At the event, he filled his backpack with whatever food he could find and sat down to eat, surrounded by strangers.

The event, known as the “FAU Appreciative Advising Institute,” is an annual four-day conference that teaches academic advisers how to better help the student body.

After a stranger asked for his story, he unloaded his tales of jail, drug abuse, and family loss without hesitation as he rarely got the chance to tell his story living out of his car. Meanwhile, the Appreciative Advising director, Jennifer Bloom, carefully eavesdropped.

Later that morning, Bloom approached Bornstein and said, “Jeron, I have a speaking spot at noon. Do you want to give a speech and talk about your life? I think you could change a lot of lives here.”

An hour later, he shared his experiences with over 200 other people. He doesn’t recall much of what he said, only that he received a standing ovation and $320 slipped to him from strangers.

Over a year later, the dollar bill he entered with that morning hangs proudly on his wall in his dorm in Innovation Village Apartments (IVA).

“I keep that there to remind myself that I can get through it, because that was one of the saddest, loneliest mornings of my life,” Bornstein said. “But one of the most beautiful nights.”

A new support system
Bornstein is now the director of 3D printing in the engineering department and was the director of new business development for FAU’s Owls Racing. He’s also in an honors program for mechanical engineering, and was a member of the leadership program Elite Owls.

His tuition is fully covered by government financial aid as long as he keeps a part-time job, and he lives in IVA for free.

Vice President for Student Affairs Dr. Corey King is the reason Bornstein sleeps in a four-walled room on campus free of charge instead of a four-door car. Bornstein was introduced to King last April by FAU President John Kelly, who he met after receiving an engineering scholarship.

King is the chair of Urban Male Initiative (UMI), an FAU program that acts as a support system for FAU students. Using a stipend from UMI, King funds Bornstein’s housing costs.

King, a first generation college student from a low-income family, said he empathizes with Bornstein.

“Somebody gave me the opportunity [to pursue education], so it’s my obligation, responsibility, and [I] want to help others to pursue theirs,” King said. “The icing on the cake will be when I get to see [Bornstein] walk across the stage at graduation.”

After 32 days in jail, nine weeks of living in a car, and countless days spent hungry, Bornstein built what he calls a “blessed” life out of nothing.

Hitting a rough patch
Bornstein’s childhood in Boston was the picture of suburbia: he lived in a “white picket fence house with the tire swing.” His father was making six figures at General Electric.

He moved from Boston to Boca Raton twice. The second time is when his parents decided to get a divorce and things started getting “fuzzy.” His father was no longer making enough to support the family, and his mother had just been diagnosed with cancer.

His brother Derek took him under his wing, but he was deep into the nightlife scene, and Bornstein became a part of it as well.

“From 12 on, all I knew how to do was party,” Bornstein said. “I did not know how to handle emotions.”

Despite graduating from high school and getting accepted to Palm Beach State College, he said he wasn’t happy. And when his mom was dying from cancer, he said he didn’t feel any sadness either — only apathy.

A few years later, Bornstein was making $21 an hour working at a steakhouse. But his mom passed away that year, and he found out that the restaurant where he worked had shut down when he returned from the funeral.

“I started looking for new jobs, and things were getting bad for me,” he said. “I was better off on my own.”
Getting back to his roots
The only constant in his life was engineering. From a young age, Bornstein already had an engineer’s way of looking at the world.

He chased the bus to see the whirring parts hidden underneath. He built Legos as a child like he did it for a living, attaching remote controls to make functioning toy cars of his own.

More than a decade later, he had turned to engineering, focusing on mastering his craft and learning how he could do more than just create remote control Lego cars. Working as a contractor, he said he would earn up to $7,000 per job.

“I would wire 100 computers to a mainframe and be the person running the computer line … and installing [surveillance cameras],” he said. “I would be able to turn around and put on my business presentation, go in, and do [my job], and do it well.”

But he was still in a dark place and spent all his earnings on an addiction to “hardcore painkillers,” he said.
A step back
By his early 20s, drugs had taken over Bornstein’s nearly every waking moment — he did drugs, sold drugs, and laundered money for drugs. He slept with a pistol under his pillow at night.

He gave up contract work for a job in 2013 at a mom and pop restaurant in Boca Raton, but he wasn’t making enough money to cover the bills. So he fiddled with the register and discovered a way to pocket the profit from customers’ gift certificates, stealing $11,800, he said.

He was arrested and served 32 days in the Palm Beach County jail.

“You walk into [jail], and see concrete and metal, and you’re in an echoing chamber,” he said. “When [the cell] buzzed and clicked and door slammed shut — there goes your freedom.”

The first few days were the most taxing, he said. He tried to keep his head down, but the chaos surrounding him was relentless — within the first week, he was greeted by countless fights and an inmate’s suicide. He was also grappling with withdrawal and couldn’t eat, while the guards taunted him and the other inmates by waving food above their heads.

During his third week behind bars, something clicked for Bornstein. He was sober for the first time he could remember, and he stared at an inmate arrested for drugs to his left and another arrested for assault to his right. It was 4:30 in the morning, and most of the other 25 inmates in the cell were asleep.

He hated that they were all wearing the same burnt orange.

Bornstein was released soon after. He remembers the way the air and heat felt on him when he stepped outside.

“I had desire to want and go do better in my life,” he said. “Those were all new feelings.”
Moving forward
After jail, Bornstein re-enrolled at PBSC, where he began to meet people who would fuel his passion for leadership and engineering.

One of those people was PBSC Dean of Math, Engineering, and Science Carlos Ramos, who Bornstein said helped open his eyes to what he was capable of. The two worked together to complete a laser Bornstein had made out of a computer, and everything began falling into place, he said.

Later enrolling in FAU, Bornstein became involved with Owls Racing, a student-run organization that builds race cars from scratch and competes in an annual race. He spent his first year soaking the program in, and the second year working on brand development and networking for the team, raising over $20,000.

He joined Elite Owls as well, a mentorship program designed to teach students leadership skills through events, speeches, and volunteering.

When King handed him the keys to his free dorm, Bornstein felt like the “struggle was over … I finally had an opportunity.”

Another FAU staff member who supports Bornstein is Bloom, who put him in the spotlight during the advising event last summer and has been “moved” by his journey.

“We all have good, bad, and ugly in our past — and we all tend to rationalize our behavior really well … so it’s easy to stereotype,” Bloom said. “I think Jeron’s story is a really important reminder that we have to be open and not be quick to categorize students.”

At this year’s advising event, Bornstein wasn’t hungry. Instead, he spoke about his new position at aerospace company Nores Precision where he’s learning how to mass produce military aircraft engine parts, and about his work in FAU’s 3D printing shop.

When he’s not in his office guiding younger engineering students through their projects, he’s working on projects of his own. He built a high-powered laser from scratch for class and got the attention of aerospace defense company Lockheed Martin, who reached out with an internship opportunity.

He also made a self-heating, temperature-controlled ski suit, and next on his long Excel sheet of ideas is a virtual reality ski platform with pressure-sensing technology.

Bornstein graduates in less than a year. He’s not sure what he’ll do next, but he’s making that decision free of drugs, homelessness, and jail.

There are still days he has to choose between filling up the tank of his SUV and eating dinner, or days where his hands bleed from working in the shop all day and he can’t afford to get them looked at by a doctor, but he said he’s OK with that.

“As much as the doom and gloom might be present, overall, I’m living such a blessing.”

Kristen Grau is a staff writer for the University Press. For information regarding this or other stories, email [email protected].